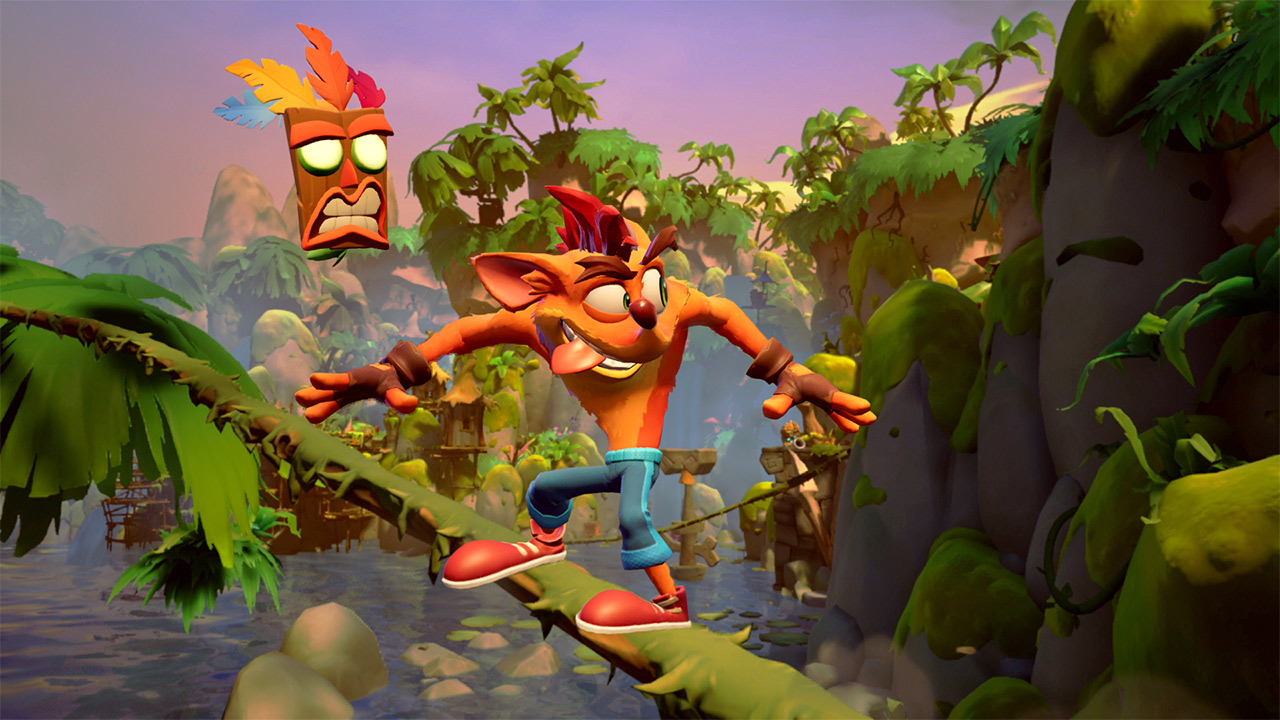 Even if many of its big releases are belated conversions, the Switch is still the ‘most happening’ console this month.

It’s certainly hard to turn down the chance of playing Apex Legends on the go. The free-to-play shooter has just launched, running in 720p docked and 576p in handheld. Double XP is available during launch week too. This conversion comes from Panic Button, who managed to get Warframe and DOOM Eternal running on Switch.

The jury is currently out on Crash Bandicoot 4: It’s About Time. Eagle-eyed fans noticed that assets were being remade entirely for Switch, lowering the polygon count while retaining the bouncy and vibrant style. This should ensure that not only does it look the part, but it runs smoothy too.

Despite the Crash games being strong sellers, it looks like it’s eShop-only for the time being.

Nintendo themselves are giving A-Train: All Aboard! Tourism a push. The A-Train series has been running for decades but never found its niche in the west despite entries making their way to Xbox 360 and PS2. Rather than simply manage a train line, it gives you the keys to the city, letting you create a tourist hotspot. A demo is available if you fancy giving it a go.

The GBA’s Robotech: The Macross Saga then gets a surprise remake, with new-fangled 3D visuals and a bunch of other improvements.

If none of these games take your fancy, there’s always Bishoujo Battle Cyber Panic, which is inspired by “naughty back room arcades of ‘90s Japan”. The back room of our local arcade was a bingo hall.

Conquer with character in Apex Legends, a free-to-play* Battle Royale shooter where legendary characters with powerful abilities team up to battle for fame and fortune on the fringes of the Frontier.

Master an ever-growing roster of diverse legends, deep tactical squad play, and bold new innovations that level-up the Battle Royale experience—all within a rugged world where anything goes.

Welcome to the next evolution of Battle Royale.

WRC 9 is the leading off-road simulation franchise endorsed by the world’s top drivers. It is the most in-depth rally game on the market:

WRC 9 has new game modes specially designed for the community, including a Clubs system where each player can create their own championship and compete in it online with the rest of the world!

Take control of all official drivers and cars in 3 WRC categories with improved physics for even greater realism, redesigned environments and all-new pacenotes for total immersion.

As Coop “Go Away, Weirdo” McCarthy, all you want to do is make the world a better place. The trouble is: Nobody likes you, school sucks, you can’t find a prom date, everybody bullies you (including your teachers), and your attempts to help only makes things worse. Will you escape high school alive? Who will love you? Why is this game called Freakpocalypse? Find the answers to these questions and more by looking at, talking to, and touching everything within the Cyanide & Happiness universe.

While Doodle God was busy creating the universe, Doodle Devil was also having some fun. The same addictive, puzzle game play that made Doodle God a hit is back but with an evil twist.

Discover the seven deadly sins and watch as the world crumbles at your fingertips as you create thousands of dastardly deeds. Combine fire, earth, wind & air to create demons, beasts, zombies… and much more. Being bad has never been so much fun!

Buy digitally and get the Totally Tubular Skins for Crash and Coco*.

It’s About Time – for a brand-wumping new Crash Bandicoot™ game! Crash fourward into a time shattered adventure with your favourite marsupials.

Neo Cortex and N. Tropy are back at it again and launching an all-out assault on not just this universe, but the entire multiverse! Crash and Coco are here to save the day by reuniting the four Quantum Masks and bending the rules of reality.

Become the president of your very own railroad company, laying tracks and running your trains as you see fit. However, you’re responsible for more than just the railroad! You’ll also be tasked with managing subsidiaries, playing the stock market and participating in urban planning, in order to develop and expand your town.

This latest installment in the A-Train series introduces the element of tourism to the urban planning formula, and focuses on building up towns into bustling tourism capitals.

Mia Faircroft’s Hidden Object travels continue! With her friend Maria Wise in tow, Mia returns to her family for a well-earned break. But home is not without its fair share of problems, and soon she gets to work to rescue the holidays! Explore vividly realized hidden object scenes, restore works of art in fun minigames, and bring joy this season in Faircroft’s Antiques: Home for Christmas!

Inspired by the naughty back room arcades of ‘90s Japan, Bishoujo Battle Cyber Panic! offers the instant gratification of a sub-genre that’s both easy to learn and fun to master. Start each action-packed stage with a silhouetted girl behind the playfield and dodge enemies while drawing lines that cut away when connected, methodically uncovering the image underneath.

It’s a game of risk-vs-reward as you capture as much of the playfield as possible without enemies or bullets crossing your path. Will you whittle away at smaller and safer zones along the edge, or will you go for higher scores by cutting into enemy territory? Box in power-ups to use their effects, unlock completed images in the gallery and share your victories across online leaderboards!

Thunder Dragon is a shoot ’em up game from NMK, which was originally released in 1991. Players control a futuristic helicopter in an attempt to protect America.

You just woke up and without knowing it, you were the only person left in the city. A Day Without Me is a puzzle adventure game, where you have to find out where everyone is going, why is there only you in the city, why are there so many oddities in the city.

Run, jump, slide, slam and glide to find your stolen corn in this side scrolling platformer. Save your corn and defeat troublesome thieving Tooki! As Stitchy, a dedicated scarecrow, you are on a mission to recover every stolen piece of corn and reclaim your fields from the evil wooden Tooki.

Become the mystical alchemist, choose your contracts wisely as they will shape the world around you, discover the long forgotten magical recipes, upgrade your lab and become the most powerful alchemist of all times.

After the collapse of the Super Boys organization, street gangs fought amongst themselves for power over Boot City. In the end, a gang lead by Supreme Leader Shmeenis rose to take control.

A highly relaxing timer-based game where you help NPCs with their daily chores.

Bob Help Them is a timer-based game, where your goal is to help all NPC’s, gathering resources, cooking food, fishing, and chopping wood before the timer ends. Enjoy the calming countryside while supporting craftsmen with their daily chores.

Bright, frantic and frenetic combat will keep you on your toes. Meet new threats on every floor and new challenges in every room. The mighty wizbot Mephisto is waiting at the top… do you have what it takes to topple them?

Bloody Bunny, The Game is a fast-paced hack-and-slash action title where you play as Bloody Bunny, a vengeful knife-wielding girl who is trapped in the body of a bunny doll. Bloody Bunny awakens in a post-apocalyptic world where humans have been turned into dolls by an evil, nameless organization. While all other dolls have lost their memories and identities, Bloody Bunny awakens with hers and is horrified to realize that her little sister, Mumu, has also been turned into a doll. She sets out to destroy her malevolent creator while killing anyone who gets in her way

Battle Brothers is a turn based tactical RPG which has you leading a mercenary company in a gritty, low-power, medieval fantasy world. You decide where to go, whom to hire or to fight, what contracts to take and how to train and equip your men in a procedurally generated open world campaign. Do you have what it takes to lead them through bloody battles and to victory?

The game consists of a strategic worldmap and a tactical combat layer. On the worldmap you can freely travel in order to take contracts that earn you good coin, find places worth looting, enemies worth pursuing or towns to resupply and hire men at. This is also where you manage, level up and equip your Battle Brothers. Once you engage a hostile party the game will switch to a tactical map where the actual fighting takes place as detailed turn based combat.

The final chapter of the 3-part series!

Set in a tavern in a fantasy world, you’ll laugh and cry in this slightly naughty love-harem romantic comedy adventure game.

Pinkman+ is a fast-paced, action platformer about a lost man with pink skin, with the ability to jetpack to reach new heights. Run, jump and jetpack through a minimalist and colorful (but deadly) environment called “The Mind”.

New features exclusively for consoles include checkpoints to save your game, a speedrun timer for those who are competitive, and vibrant new color palettes for additional variety.

Sokodice is a puzzle game where you must navigate dice through mind boggling levels to match the number of the dice with the number on a designated tile.

Jump into your transformable Veritech fighter and blast your way through the entire legendary 1980s anime series, in a side scrolling shooter that will test the most hardened pilots. Follow the story of the war against the Zentradi, unlocking special characters and etching your name next to the great pilots of the series like Rick Hunter and Roy Fokker.

Next week: Plants vs. Zombies: Battle for Neighborville Complete Edition, In rays of the Light, Kingdoms of Amalur: Re-Reckoning, Saviors of Sapphire Wings Stranger of Sword City Revisited, Can’t Drive This, Root Film, Stubbs the Zombie in Rebel Without a Pulse, Space Otter Charlie, Signs of the Sojourner, Explosionade DX, Beach Buggy Racing 2: Island Adventure, Under: Depths of Fear, and R.B.I. Baseball 21.