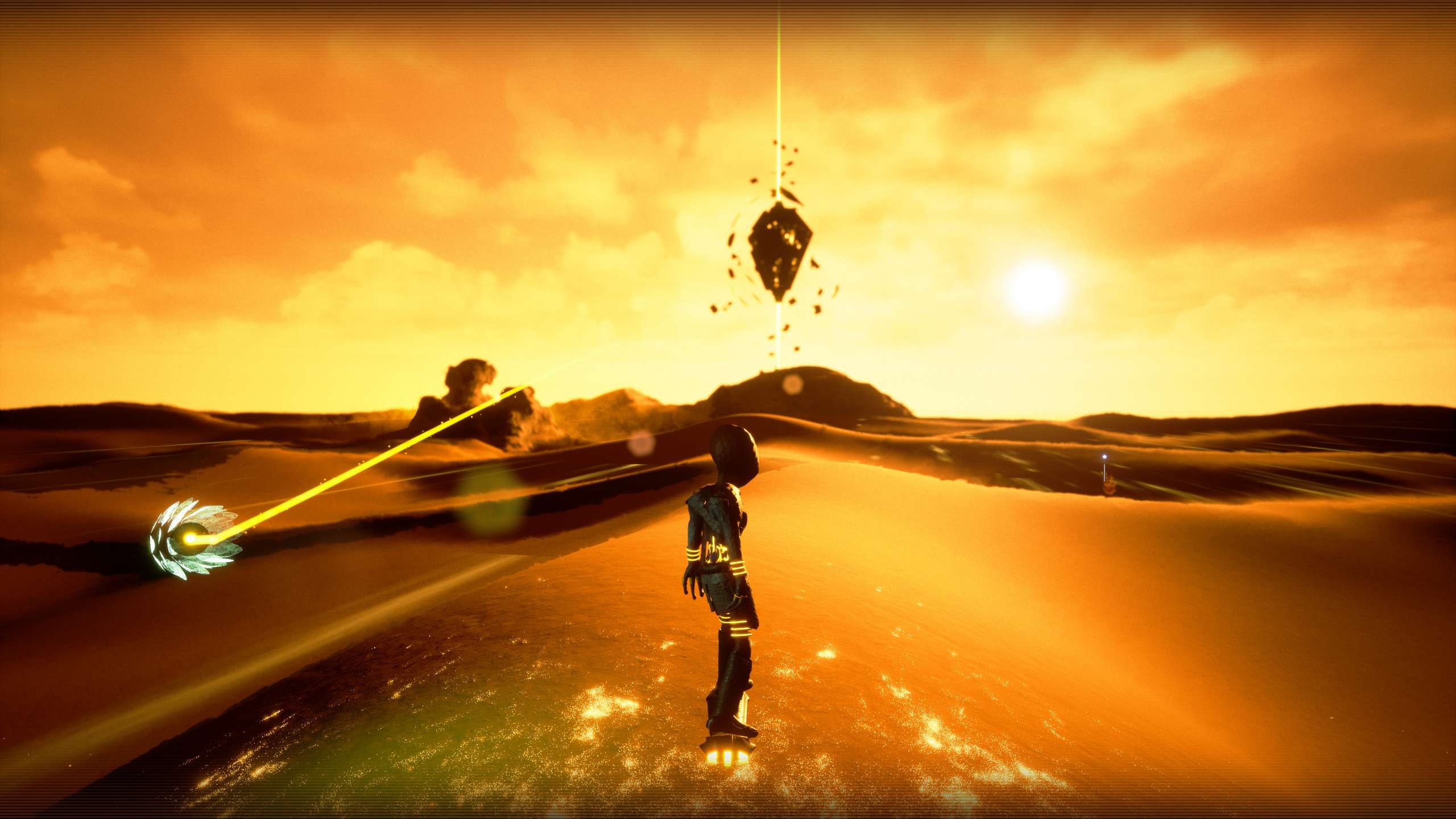 Hoverboarding aliens surfing at warp speed over golden sparkling dunes? Sign me up.

AnShi is a cinematic experience to be savoured slowly and at your leisure. It’s a short-lived experience lasting just a couple of hours, though this could be fleshed out only a little by the more exploratory players. Though it looks like an open world environment on the outside, there is still a linear aspect. Too much freedom would distract from the story, and whoever wanted too much freedom anyway? There’s more here than meets the eyes, or ears.

Mr Alien crash lands on a barren planet after a star explodes close to his ship. Pulling his hoverboard off his back, he begins exploring. With no map, our celestial chum pokes his way into various areas, picking up memory fragments or artefacts which tells a pictographic history about his civilisation’s past.

Motion capture breathes some life into the alien himself, with very human-like qualities in its behaviour and action, but there are still moments when it feels clunky. I often felt his actions could be sped up just a couple of frames faster, as they were just on the slightly too slow side.

Though using the hoverboard is the preferred method of movement given that it is much faster, there are moments when you will need to travel on foot. These transitions into a different action, getting on/off the board or activating ancient machinery is where it feels the most off.

Occasionally you’ll discover a black hole while exploring. They transport you to your mothership, where my interpretation is that Mr Alien is reporting back to the elders on the state of his findings. Nanu nanu. The assembled text is the only writing to be found, giving the general gist of the current planet’s history.

The highlight of AnShi is truly in hoverboarding through the various areas, particularly outside in the desert where it seems to most attention has been paid to making a fluid experience, serving up a treat for the eyes while you surf over the golden oceans of sand. The hoverboard is smooth to control which is important given it’s the main method of transportation.

The music is also beautifully scored and suits the game well. It pulls back in moments of exploration and swells with emotion during storytelling moments. I don’t mind admitting I was so caught up in the emotion and delivery of the moment, I was moved to tears by the end, once the story resolved and you finally understand why our alien adventurer was surfing the lands.

Due to the seeming vastness of the terrain, a helpful beacon of light shines to show you the next area of interest you should travel to. This is particularly beneficial outside where you can easily get carried away sliding your board over the dunes, finding the correct way is a simple as looking for the light shining in the sky. When you are inside, there are colour variations to these waypoint markers when using doors, platforms or traversing to different levels of the ruin, which I didn’t understand the meaning of, and it caused me to get lost going round in circles for some time. This only became a problem toward the end of the game, and given the short nature of AnShi, wasn’t something I had to endure for too long.

Tried and tested on Steam, it plays beautifully with a Windows Xbox controller. I did encounter one small bug which affected the brightness of the game – pausing dims the screen and on one instance unpausing left it dark. Saving and restarting rectified this, though.

One could argue that all games are in some way art. And to overlook art because of some small perceived flaws can mean missing out on making a connection to something that someone else has created, resonating in meaningful ways. AnShi, while in some ways a little flawed, created a connection that I enjoyed and appreciated. What will our world look like in 1000 years? What legacies will we have to leave behind? It’s interesting to think about.

Anshi is developed by Andre Ledermüller and available 22nd February on Switch and Steam.