When it comes to titles aimed at younger gamers, Climax Studios probably isnâ€™t the first developer that springs to mind. But over the years, the Portsmouth-based outfit has created more family-friendly titles than you may expect, including tie-ins for Disney and some of the earliest LEGO-based games available for consoles.

With this in mind, it shouldnâ€™t come as a huge surprise to discover that Crayola Scoot â€“ out now on Switch, PS4 and Xbox One â€“ feels perfectly tailored for the youngâ€™ens.

Climaxâ€™s last release â€“ Surf World Series â€“ likely benefited Crayola Scootâ€™s development too, both being extreme sports titles with a focus on performing stunts and carrying combos. As the name suggests, scooters are the order of the day here. These arenâ€™t any old scooters, though â€“ after successfully landing a trick, or while boosting, a trail of fluorescent paint is left behind. If youâ€™ve played Nintendoâ€™s runaway success story Splatoon youâ€™ll soon notice some more than a few similarities here. Not just within the match types, but also within the presentation. 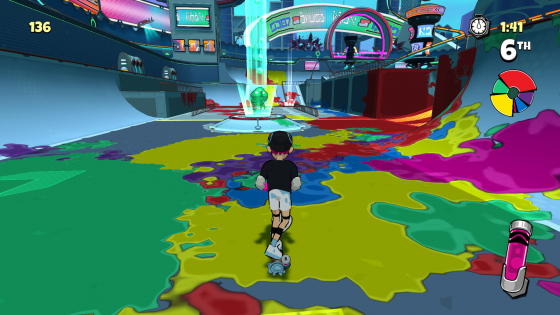 Crayola Scoot never feels like a shameless clone, thankfully â€“ due to the presence of scooters and the focus on performing stunts, itâ€™s different enough to stand out from its inspiration. A match type involving covering a skate park in as much paint as possible – complete with a camera pan that shows off your messy handiwork – is about as cheeky as it gets.

Mixing things up, there are also checkpoint style races – which entail collecting crayons that appear randomly on the map – plus score attack matches, and tag battles in which bonus coins are gained for eluding the opposition for lengthy periods. Certainly, there are enough match types to keep things fresh while working through the single-player mode.

Prize money can be blown on new outfits and new scooter parts, and weâ€™re pleased to report the former arenâ€™t merely cosmetic â€“ by rising the ranks and challenging the opposition (which includes a knight in golden armour, a feline witch, a robot, and a dim-witted zombie) access to their stat-boosting scooter parts is granted, which adds a welcome sense of progression. Kids are bound to enjoy the customisation aspects, allowing them to kit out characters with colourful â€“ and daft â€“ attire. 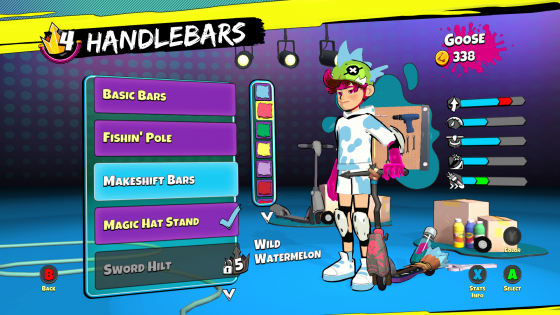 Indeed, there is quite a lot to enjoy here. New worlds â€“ including an intergalactic theme park – unlock early on, and each has a long list of matches with three stages of difficulty to try. The one-star difficulty is perfectly pitched for inexperienced gamers, while the more challenging setting feels more geared towards those who know their way around a joypad.

Landing tricks is a simple process, as is grinding rails â€“ you donâ€™t have to worry about balancing while grinding or landing perfectly. Avoiding walls and water hazards is a different matter, however.

A scoreboard charting progress can be found within the plaza hub, and itâ€™s also here the arcade â€“ with various split-screen multiplayer modes â€“ and a free roaming mode can be accessed. Sadly, thereâ€™s no real reason to explore the skate parks, although you may accidentally discover an area ripe for chaining combos; a skill that comes in rather handy. 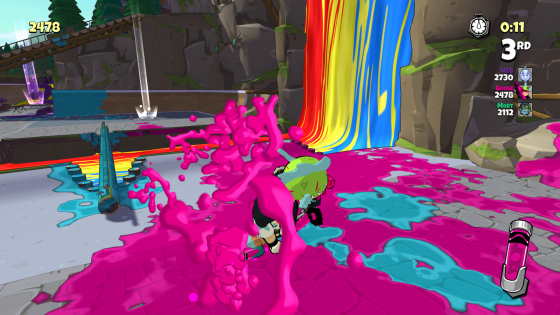 The stunt/combo aspect comes into play heavily during the one-on-one S.C.O.O.T battles, in which players and the AI take turns to pull off the highest scoring combo. As the campaign progresses, these can become deceptively tricky.

Parents can rest assured that Crayola Scoot has enough features and modes to keep younger gamers quiet and that the flexible difficulty level should keep frustration to a minimum. Thereâ€™s just enough depth to the combo system for it to appeal towards the pre-teens crowd too.

If the popularity of adult colouring-in books has taught us anything, youâ€™re never too old for some colourful Crayola-based fun.