Maximum Gamesâ€™ Troll & I is one of the worst games of this generation, but donâ€™t take my word for it. Around 90% of those who’ve also made the mistake of buying this Iron Giant-esque adventure are also seemingly in agreement.

After making it through a labyrinth-like cave complex, some two hours in, the achievements began to flag as rare. According to the Xbox One achievement ratios, only 8% of players have managed to endure past this point. This isnâ€™t a game that’s fundamentally flawed yet it’s still possible to squeeze some enjoyment out of it – itâ€™s utterly shambolic, almost to the point of being unplayable.

Despite its numerous faults, I can still see why Maximum Games picked up the publishing rights, ergo why somebody might pick up Troll & I on a whim. Set in the Nordic countryside during the 1950s, this adventure has an intriguing and whimsical premise.

Thereâ€™s an undeniable focus on teamwork, with Troll (thatâ€™s his name â€“ Troll) able to lift heavy objects and trample enemies under his feet, while his newfound human chum Otto can use spears, creep around quietly, and cut down objects with his trusty knife. The two form an unlikely alliance, using their brains and brawn to outwit a group of hunters that have occupied the countryside. Itâ€™s The Iron Giant game we never received. Or Stig of the Dump, if you prefer. 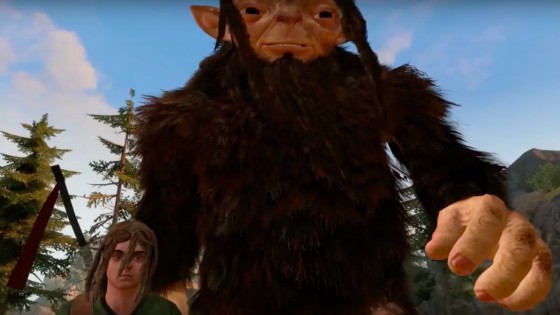 For Xbox One owners hankering for something similar to the PS4’s The Last Guardian, this is one of the few alternatives out there. At least until Majin and the Forsaken Kingdom gains backwards compatibility, anyway.

I consider myself the patience sort, yet only managed to stick with Troll & I until for around 4 hours. In that time, I had to contend with its poor camera, unintuitive controls, badly designed UI, one-dimension combat and abundance of bugs. I had to revert to the main menu twice within those 4 hours, too â€“ Troll is prone to becoming stuck while traversing narrow corridors, and the climbing/jumping mechanics are so inept that I managed to snag Otto on thin air.

The breaking point came upon entering a heavily guarded enemy camp which introduces spear-lobbing enemies that can kill with one hit. Theyâ€™re scattered around the camp, usually out of view, and as such can attack without warning. As far as difficulty spikes go, itâ€™s off the charts – just take a look at the video below. To make matters worse, not only is the camp both open and complex, but the checkpoint system is so lame that during this section itâ€™s possible to lose around 30 mins of progress.

The save system is so poor, in fact, that it doesnâ€™t keep track of any collectables or weapons found between checkpoints â€“ if you die, you must collect them again. Same goes for any weapons crafted.

Reading up on Troll & I online, it seems I did myself a favour quitting here. It apparently becomes even more frustrating down the line, with one gamer more patient than myself claiming that a later boss battle took them â€œseveral hoursâ€™ worth of attemptsâ€. I can believe it, as for the most part itâ€™s like playing a game thatâ€™s barely 50% complete. It gets little right outside of the occasionally clever looping level design.

Even the hint system is broken, failing to provide tips while aimlessly wandering â€“ a situation youâ€™ll find yourself in often. As for the visuals, it resembles an early last-gen title. Horrid muddy textures recycled endlessly. Both Troll and Otto have physics-enabled dreadlocks which, if youâ€™ll excuse the comparison, resemble poop. Presumably, Spiral House wanted to keep Trollâ€™s design in-line with Eastern European folklore, but the result is a character thatâ€™s the exact opposite of endearing. A lumbering mess of scrappy fur textures and poo.

Troll & Iâ€™s next stop is the Nintendo Switch where itâ€™s arriving as a Â£20-Â£25 budget title. I truly hope the developers have spent the past few months giving it a significant overhaul, as in its current state itâ€™s an entirely joyless experience.