Weâ€™re still in two minds as to whether launching a new release during E3 is sensible or not.

Any coverage is bound to be shoved off a gaming siteâ€™s pages quickly, in favour of E3 news. ARMS does have a few advantages, however â€“ the global testpunch converted many naysayers, and Nintendo lifted the review embargo some time ago.

As reported during our new release round-up, scores include 9/10s from Nintendo Life and God is a Geek, an 8.25 from GameInformer and 8/10 from The Metro. It also recieved Eurogamer‘s ‘Reccomended’ badge today. “Arms does for fighting games what Mario Kart did for driving games, and the results are absolutely splendid,” they said.

There arenâ€™t any big new releases on PS4/Xbox One to challenge it, meaning it stands a good chance of taking the UK chart top spot. Weâ€™ll find out on Monday. 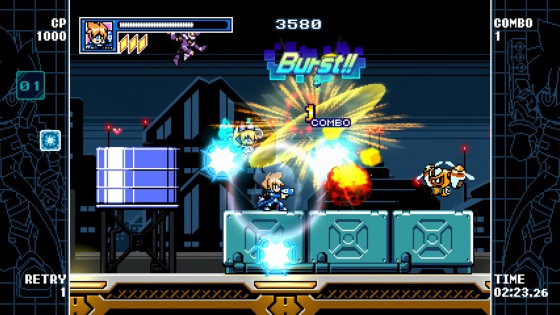 The Switch sees two other eShop releases this week. In fact, it’s the only Nintendo system to see some eShop action, aside from a Dr Kawashima’s Devilish Brain Training demo.

Feared cancelled at one point (we even reported as such, after having a long-standing pre-order cancelled), Nintendo had a sudden change of heart for Devilish Brain Training, dusting it off to launch alongside the upcoming New 2DS. It launched in the US way back in 2013, and in Japan in 2012, making this an incredibly belated release.

Anyway, we digress. The new Switch releases are ACA NeoGeo Sengoku (Â£6.29), a scrolling brawler from 1991, and Mighty Gunvolt Burst (Â£8.99) – a 2D shooter similar to Mega Man, starring Mighty No. 9â€™s Beck. Worry not, as itâ€™s a far better game than Comceptâ€™s lacklustre shooter. Destructoid dished out an 8/10. â€œI can see myself picking up Mighty Gunvolt Burst every now and then, especially since it’s so easy to do on the Switch,â€ their reviewer stated.

In addition to the usual indie titles, including a wealth of hidden object games on 3DS, Nintendo has reduced a handful of games as part of an E3 sale. Prices are as follows:

All discounts are in effect until 22nd June.