Metacritic is a hot topic of discussion today, but it not for the usual inflammatory reasons – Zelda: Breath of the Wild is on track to become one of the highest-rated games of all-time, currently second only to the N64â€™s Ocarina of Time. 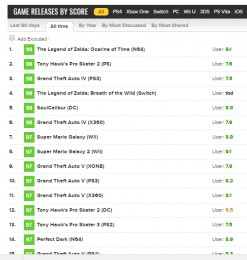 With a 98% Metacritic â€“ from a pool of 61 reviews â€“ itâ€™s on par with GTA IV and such age-old classics as Soul Calibur and Tony Hawkâ€™s Pro Skater 2, while tracking above GTA V, Halo: Combat Evolved, Bioshock, Half-Life 2 and Uncharted 2. Now thatâ€™s some fine company.

Of those 61 reviews not even one has a score lower than 9/10, with the only complaints being minor technical issues such as frame-rate drops.

Rest assured that the Switch is off to the best possible start – with a launch game for the ages; one thatâ€™ll be remembered in the same light as fellow system-sellers Halo:CE and Super Mario 64 for years to come. It may even manage to topple Ocarina of Timeâ€™s Metacritic score in the weeks to come. A dizzying prospect.

Essential – Eurogamer: “Switch’s debut and Wii U’s demise are marked by a radical reinvention of The Legend of Zelda that will go down as an all-time great”

100/100 â€“ GamesBeat: “As the name suggests, it is a breathing wilderness that Nintendo brought to life by abandoning the structured, predictable Zelda formula. At the same time, it feels like the ultimate culmination of the ideas we encountered in the first Zelda in 1987”

10/10 â€“ Forbes: “Don’t miss this one, even if you’re not a fan of older Zelda games. New fans and old fans alike will find so much to love in this game”

10/10 â€“ Dual Shockers: “Breath of the Wild may not only be the best Zelda game ever produced, but it rivals Super Mario 64 and Halo: Combat Evolved for the best launch game ever shipped with any console”

10/10 â€“ GameInformer: “Despite the massive scope of the game, Breath of the Wild retains Nintendoâ€™s knack for polish without any major technical hiccups to disrupt the experience. I was entranced by this version of Hyrule, and it surprised me at nearly every turn, from its wealth of discoveries to the way it shuns the established tropes of previous Zelda games”

10/10 â€“ Polygon: “The Legend of Zelda: Breath of the Wild is the biggest, most open Zelda game ever made, but it also brings with it a massive change in design philosophy, and the way it treats players. Breath of the Wild is the first main Zelda title since 1991 (2013â€™s Link to the Past sequel A Link Between Worlds notwithstanding) to feel like it respects its players implicitly”

10/10 â€“ Nintendo Life: “This will be in the running as the best game in the IP’s history, and it will likely be discussed as a leading contender in the broader open-world genre. Nintendo has bravely taken one of its biggest franchises in a new direction, and it’s delivered a triumph”

10/10 – GameSpot: “Breath of the Wild is a defining moment for The Legend of Zelda series, and the most impressive game Nintendo has ever created”

10/10 â€“ God is a Geek: “Breath of the Wild is an absolute masterpiece, and may well be the best The Legend of Zelda game ever made. Despite a few minor technical issues, this a truly unforgettable experience”

10/10 â€“ IGN: “The Legend of Zelda: Breath of the Wild is evocative, exhilarating, and a masterclass in open-world design”

10/10 – The Metro: “The best Zelda thereâ€™s ever been, and very possibly the best video game ever made”

10/10 â€“ Destructoid: “This isn’t your typical boiler plate open world cash grab, rife with to-do lists and busywork. Zelda: Breath of the Wild is an evolution of the formula for both eastern and western philosophies alike, and a new blueprint”

5/5 â€“ The Daily Dot: “There is always something new to discover, but at your own pace. Somehow, the adventure never loses momentum over dozens of hours of exploration, the inspired design holds up, making for an unmistakable Zelda game that completely changes everything expected from the series”

5/5 â€“ The Telegraph: “It is dense yet lean; its maps bursting with distraction but without an inch of it wasted. It is classical yet modern; drawing on the heritage of its own illustrious series while openly embracing more recent gaming trends. It is challenging yet welcoming; giving you the choice to ease yourself in or take on some of the gameâ€™s most fearsome creatures…These are just some of the reasons why, after several dozen hours of play and despite not yet seeing its quest to completion, I am convinced that it is one of the very finest video games ever made”

5/5 â€“ US Gamer: “Nintendo has crafted a wide, beautiful world to explore, underpinned with some interesting emergent mechanics. Breath of the Wild stands as one of the best in the series and a great opener for Nintendo’s newest console”

5/5 â€“ Giant Bomb: “Nintendo may have changed so many long-standing traditions of the Zelda franchise, but the spirit of discovery is as strong as itâ€™s ever been no matter your age. I didnâ€™t think Iâ€™d feel the Zelda magic this strongly ever again, but I couldn’t be happier to be proven wrong”

5/5 â€“ The Guardian: “The Legend of Zelda: Breath of the Wild is the result of that examination: a game that marries the best bits of the franchiseâ€™s long history with the best bits of the rest of the gaming world, and produces something even greater than the sum of its parts”

5/5 â€“ Games Radar: “The most freeform Zelda yet, without sacrificing the charm, fun or quality you expect from the series. Nintendoâ€™s finest work since Super Mario Galaxy”

9.5 â€“ EGM: “While Breath of the Wild doesnâ€™t follow the standard Zelda formula, it may be the quintessential example of the Zelda spirit. With a stunningly beautiful and interactive world, surprising difficulty, and a dizzying amount of riddles and puzzles, thereâ€™s no end to the secrets hidden in the vast land of Hyrule”

9/10 â€“ VideoGamer: “You know when you were a kid, in the summer, you used to have huge pretend adventures in the back garden with all your mates? Where the shed was a castle and the hedge was a jungle? And it was like really having an adventure? This is sort of like that”

Zelda: Breath of the Wild is out 3rd March on Switch and Wii U.