Consider last weekâ€™s Amazon Prime Day a success – the UK chart has seen a good old shake up off the back of Amazonâ€™s one-day discounts.

Not so much in the top ten – where LEGO Star Wars: The Force Awakens claims its third number one – but rather just outside, with Zoo Tycoon, Kinect Sports Rivals and Guitar Hero Live re-entering at #11, #12 and #15 respectively. To reiterate, thereâ€™s a Kinect game at #12 in the chart. A Kinect game. 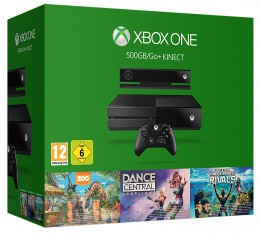 This is more than likely due to Amazon clearing out the Xbox One Holiday Bundle, as itâ€™s known. Fellow Xbox-exclusives Quantum Break, Rise of the Tomb Raider and Forza Motorsport 6 are back in the chart too, while Batman: Arkham Knight is up from #32 to #13 and MGSV: The Phantom Pain returns at #34.

Moving back to the here and now, Capcom’s Monster Hunter Generations is off to a flying start debuting at #3.

Activisionâ€™s Ghostbusters tie-in wasnâ€™t anywhere near as lucky as MonHunGen, and neither does it deserve to be, failing to break even the individual format charts.

As for other recent releases, the dismal 7 Days to Die drops from #11 to #21 while Mirrorâ€™s Edge Catalyst – a game so tedious we couldnâ€™t even bring ourselves to review it – falls to #35.