Single format magazines were rife in the â€˜80s and â€˜90s, even if the format in question didnâ€™t have the largest of user bases or the busiest of release schedules. If there was a gap in the market, it was soon filled. SEGA Master Force magazine is a good example, arriving in the Master Systemâ€™s twilight years after 8-bit SEGA fans frequently complained about the lack of coverage in the likes of SEGA Pro and Mean Machines. Another example: Europressâ€™ GB Action magazine, which took pride in becoming the worldâ€™s first and only Game Boy magazine. 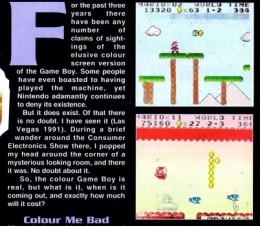 Issue #1 launched in June 1992 for 99p, with a cover reporting an inside scoop on Nintendoâ€™s upcoming colour Game Boy.

â€œDuring a brief wander around the Consumer Electronics Show, I popped my head round the corner of a mysterious looking room, and there is was. No doubt about itâ€ the writer claimed. Now thatâ€™s quality journalism.

In fairness though, some very educated guesses were made about the GBâ€™s successor, such as not to expect a technical powerhouse – just a minor update. The mock-up screenshots were very similar to the real deal, too. Their speculated release date of September 1993 was way off, however – the Game Boy Color didnâ€™t arrive until 1998.

GB Action lasted for 41 issues, with the final issue – dated August 1995 – featuring lumbering dinosaur brawler Primal Rage on the cover. The magazineâ€™s cancellation was unfortunately timed, as Pokemon mania was just around the corner – the game that single-handedly propelled the handheld back into the limelight, extending the systemâ€™s life until (and beyond) the Game Boy Colorâ€™s arrival. 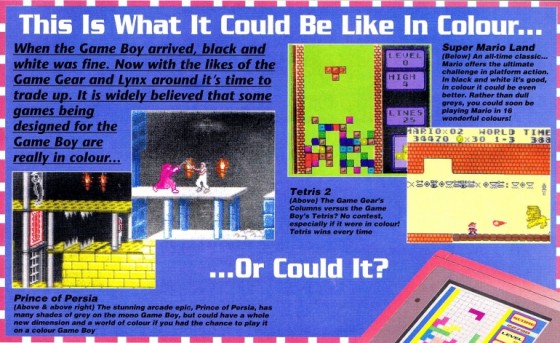 The price tag soon rose to Â£1.25, but even so it remained one of the cheapest gaming mags around. The price did reflect the size however – most issues clocked in at around 60 pages. Arguably, the price reflected quality too – you only have to browse through a few issues to notice hefty amounts of padding, suspiciously high review scores and features that had little to do with the Game Boy whatsoever. 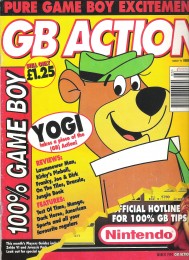 Most issues had either an upcoming movie adaptation or cartoon tie-in as cover features. Even the likes of Stargate, Speedy Gonzales and The Lawnmower Man were given preference over Nintendoâ€™s first-party releases. From what we can abstain, Super Mario only took the front page once in the magâ€™s three year run. Unbelievable, really. Although this may lead to assume that Nintendo didnâ€™t take kindly to unofficial publications, preferring to support the official Nintendo Magazine System instead, GB Actionâ€™s cheat section was in fact sanctioned by the official Nintendo Hotline.

This only adds more fuel to the fire that the editors were in cahoots with publishers; backrubs all-around for giving their licensed games pride of place on the cover. Case point; The Lawnmower Man featured on issue #22, and was then given a glowing 91% review score the following issue. For those who have never played it, the multi-staged shooter was almost as bad as the movie on which it’s based.

Issue #23â€™s letters page features an utter gem, questioning the magazineâ€™s integrity while describing it as a â€œslick advertising brochureâ€. In response, the editor claims that they are totally independent. â€œ..but surely you donâ€™t think weâ€™re a front for the Software [sic] houses?â€ they asked. It was certainly questionable. A read of issue #23â€™s review directory reveals some dubiously high scores for licensed games, with very few games in general scoring lower than 70%.

Itâ€™s issue #23 that we have at hand, featuring Yogi Bear on the cover. This issue opens with a â€˜stop pressâ€™ news page, claiming to be â€œthe most rip-roaring Game Boy news pages youâ€™re ever gonna see in your entire lifeâ€. In the news this month? Reports of a Mega Man animated series, US Gold bagging the World Cup rights, a look at a new power pack accessory, and the chance to win an Electronic Arts music CD. Slightly more newsworthy: Nintendo reportedly denying Tetris 2 a UK release due to poor quality. â€œNintendo donâ€™t reckon itâ€™s good enough for usâ€ they claimed.

No time was wasted getting onto the reviews. As early on in as page 8, no less. This month saw the release of Kirbyâ€™s Pinball Land (89%), Bram Stokerâ€™s Dracula (85%), On The Tiles (71%), The Lawnmower Man (91%) and The Jungle Book (90%). Marks out of ten were given for gameplay, presentation and lastability along with a second opinion from an unnamed writer. The quality of writing isnâ€™t entirely terrible – certainly no better or worse than other magazines of the era – with the odd piece of innuendo slipped in here and there. â€œSuch a supple wristâ€ read a caption for Kirbyâ€™s Pinball Land. 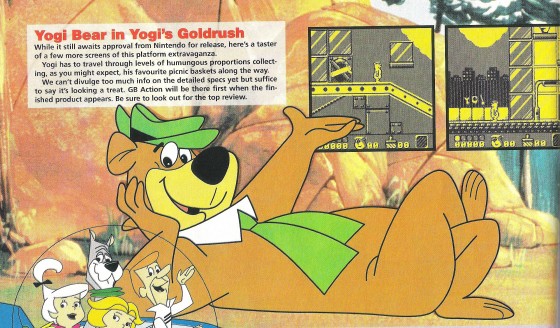 Although Yogi Bear took issue #23â€™s cover, the preview of Yogi Bear in Yogiâ€™s Goldrush took up less than quarter of a page – just two screenshots and two paragraphs, running alongside a three page history of Hanna-Barbera. The padding didnâ€™t end there – this issue had two pull-out posters, several pages of adverts for GB Actionâ€™s sister publications, a feature on Dark Horseâ€™s graphic novels and a look at upcoming Manga movies. Also: four pages of classified adverts.

Actual content relating to the Game Boy was incredibly slim, including a few pages of tips and cheats, readerâ€™s reviews and guides to Zelda: Linkâ€™s Awakening and Jurassic Park. The review section aside, the Hanna-Barbera feature is the only piece that appears to have a significant amount of effort put into it.

GB Action certainly was an odd publication, favouring third-party games over Nintendoâ€™s big hitters and forced to pad pages out during quiet months. Unlike Super Play, N64 Magazine and other celebrated publications itâ€™s rarely spoken about amongst the gaming community. If the magazine has shown a bit more appreciation towards Nintendo, then maybe it would be held in higher regard.