Upon initial inspection this top-down RPG is little more than Diablo III in legendary monster hunterâ€™s clothing. From the art direction to the menu layouts, developer Neocore has copied Blizzardâ€™s multi-million seller in a manner thatâ€™s beyond brazen. Spend a few hours in Van Helsingâ€™s boots though and it soon transpires that it does bare some original elements. Tower defence battles – in which itâ€™s possible to place traps, including the self-explanatory â€˜monster in a boxâ€™ – are a good example. Youâ€™ll have to slog your way through legions of monsters from Eastern-European folklore before discovering the gameâ€™s more inventive features, though.

During the opening hour only the basics are taught, leaving a vast majority of the finer elements untouched. This gives the game a learning curve that even Diablo III veterans may find steep. We can honestly say it wasnâ€™t until around 6-7 hours in that we understood the game fully and thus began to tailor Helsingâ€™s skills to our tastes. We didnâ€™t even realise it was possible to swap between Helsingâ€™s sword and rifle until two or three missions in, such is the unhelpful nature of the tutorial.

These are the two weapons Helsing carries, and itâ€™s a good idea to start boosting stats on one or the other from the get-go. We made the mistake of levelling up both ranged and melee attacks evenly and soon found ourselves with a hero that was jack of both trades but a master of none. Thankfully itâ€™s possible to reset stats later on, which allowed us to turn our Helsing from a sloppy shooter to a crack shot. 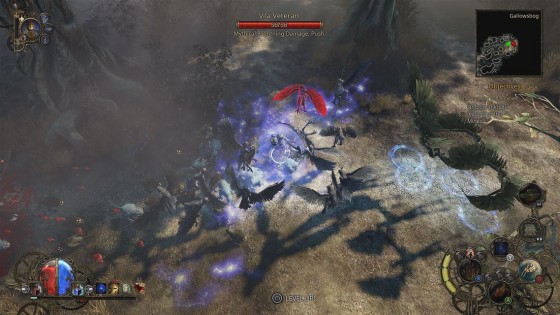 Although no time is spared getting into the swing of monster slaying, the first half of this 15-20 hour adventure lacks direction due to an almost non-existent storyline. Helsing simply travels through forests, swamps and rural towns quelling beasts and helping townsfolk while making his way to the industrial city of Borgovia. Itâ€™s here that the second half of the adventure takes place, providing a new base of operations and the introduction of tower defence battles. These are an undeniable highlight, providing a pleasant change of pace. Not only do resources have to be found for the construction of traps, but they also have to be researched by purchasing blueprints. They can then be placed strategically on an overhead map before waves of enemies make their approach.

During the second half the story steps up a gear too, with the villain of the piece making himself known. Well, kind of. Professor Fulmigati has been playing God, creating all kinds of abominations and sending them out to cause havoc on Borgoviaâ€™s ruined city streets. Fulmigati is mentioned in cut-scenes and during conversations but doesnâ€™t show up in the flesh until the final battle. Heâ€™s something of a faceless identity.

Helsing is joined by Lady Katrina, a blue blooded ghost bound to the notorious hunter. Full of dry wit and sarcasm, sheâ€™s the only companion available. Itâ€™s fortunate, then, that her AI routines (read: behavioural patterns) can be chosen to suit your means, forcing her to become a ranged, melee or a damage absorbing fighter. She can also be instructed to mop up gold and other spoils at the end of a battle. Another neat idea is that itâ€™s possible to send the royal ghoul off shopping to offload unwanted gear. 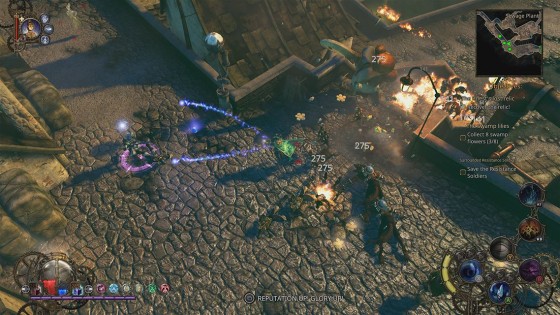 Although death comes both quick and often, the penalty is always minimal

An inventory full of junk is something youâ€™ll quickly amass. Out of the â€œboxâ€ only the hunter character class is on offer, with the other two classes available as DLC. Yet, weapons and armour for the two additional classes are still often acquired. Irritatingly, they always look way meatier than the equipment vanilla Van Helsing carries. It is at least possible to infuse stat boosting ‘essences’ into weapons and armour to give them a personal touch. Just like in Diablo III, we found ourselves spending an untold amount of time staring at the inventory screens, comparing weapons and working out which items to keep, sell and upgrade.

When it came to combat, we found ranged a lot easier going than melee. This is one of those RPGs where enemies swarm onto your location the very second they learn of your whereabouts. Being surrounded by 20-30 enemies at once isnâ€™t an uncommon sight, but by using a mixture of explosive shots, lightning bolts and fireballs the crowds can be kept back with relative ease. Although death comes both quick and often, the penalty is always minimal – itâ€™s simply a case of coughing up some gold to respawn instantly, or respawn at a checkpoint for a reduced amount. Gold is bountiful and as such the penalty for failure never feels particularly punishing. This doesnâ€™t make the game any less of a slog however – combat basically boils down to standing on the spot with the attack button held down whilst casting the occasional spell and consuming health potions. Attack dodging is performed automatically and dependant on luck, and if there is a means of manually evading we certainly never discovered it. 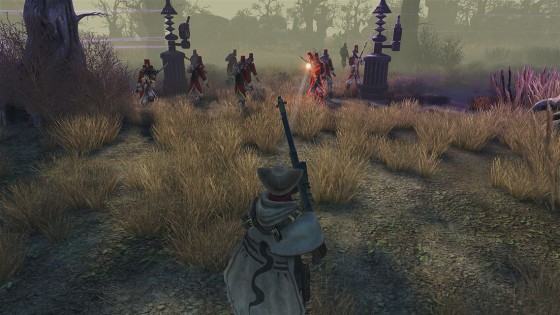 Boss battles too are a little perfunctory. Or rather, unfunctional. During the first boss battle a glitch occurred, prompting all enemies to suddenly freeze and remain motionless. Luckily, we didnâ€™t have to reload progress – walking in and out of the arena solved this matter. Another boss battle takes place in a spider filled cavern in which the spiders continuously respawn at an alarming rate. The boss is something of a bullet sponge; having spiders constantly fire webs that slow Helsing down makes this battle more tedious than challenging. Then during the â€˜boss defeatâ€™ cut-scene the game crashed, forcing us to endure the whole thing all over again. Incidentally, this was the only instance of a crash. Frame rate drops are common though, depending on how many enemies are giving chase at a time. Sometimes itâ€™s more than a tad tempting to try and leg it to the next objective rather than stop and fight through the hordes.

Signposting is another problem. One mission entails finding an engineer to power a generator. The mission description is quite literally â€œFind the engineerâ€ – thereâ€™s no rough whereabouts to speak of. This lead to around an hourâ€™s worth of backtracking that we could have obviously done without. Thankfully enemies donâ€™t respawn in an area until a new mission within that location is started, and only a handful of locations are re-used, save for when taking on one of the few sub-quests. 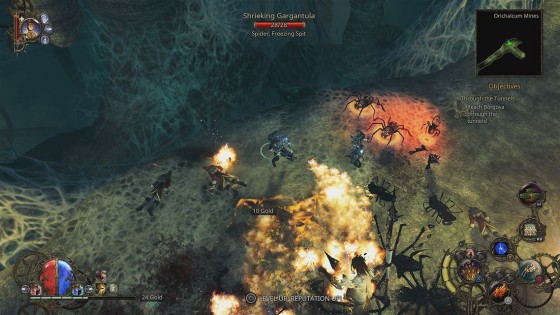 Itâ€™s a shame that there arenâ€™t more diversions as once the story is beaten all thatâ€™s left is the hardcore mode and online PvP – the only multiplayer mode with matchmaking. This means you can forget about any jump-in-jump-out multiplayer shenanigans like Diablo III before it, as the co-op mode can only be played with those on your friends list who have achieved the same level of progress. Now thatâ€™s the very definition of demanding.

Although The Incredible Adventures of Van Helsing held our interest until the end, we certainly didnâ€™t feel compelled to convince others to come monster slaying with us online.