Iâ€™ve become infatuated with LCD handhelds over the past couple of weeks. Not buying or playing, but simply looking through eBay listings and browsing the few sites dedicated to handheld collecting.

The prices sellers set for even non-Nintendo LCD games is off-putting to say the least, with various rare units priced at over Â£100 on Buy It Now auctions. This isnâ€™t the reason for not wanting to start a collection however. Itâ€™s simply because the majority of handheld games have aged horrifically, or were pushing the boundaries of simplicity to begin with. I know full well that if I open my wallet and blow the best part of Â£30 on a reasonably uncommon handheld that I will be able to count the amount of minutes spent playing it on one hand. And then? And then itâ€™ll be placed on a shelf to collect dust. 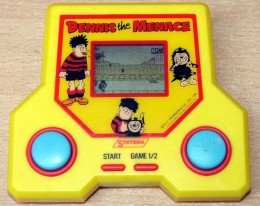 Just by looking at some handhelds, especially those were the seller has thoughtfully popped a few batteries in to prove that the insides havenâ€™t eroded; itâ€™s possible to fully grasp what a game entails in a matter of seconds. Case point: I was tempted to purchase a Systema Dennis the Menace LCD game from 1991. Thatâ€™s Dennis the Menace from The Beano – not the American Dennis the Menace that spawned a movie in 1993, along with an accompanying tie-in from Ocean. Iâ€™d never seen this handheld before, but just by reading the sellerâ€™s brief description I could envision how it would play. To wit: â€œCatch balloons as they fall from the skyâ€. Those two buttons, quite obviously, move Dennis from left to right and Iâ€™d even bet my last local currency on it being â€˜game overâ€™ if three balloons are missed.

So where does the joy in browsing come from? Nostalgia, mostly. But thereâ€™s also delight in discovering a handheld that I never knew existed, such as Grandstandâ€™s Zig And Zag: Revenge Of The Killer Toasters game starring the puppet aliens from Channel 4â€™s The Big Breakfast. The artwork isnâ€™t particularly fetching – itâ€™s rather garish, to be fair – but other handhelds are adorned with wonderful artwork either on the packaging or on the system itself. Iâ€™d argue this is why most Tiger handhelds sell for over Â£20. The games themselves certainly havenâ€™t aged gracefully. 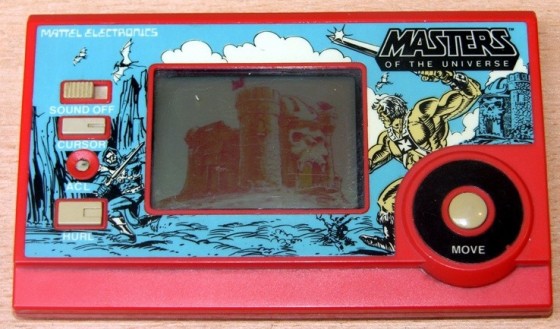 The names of some LCD games raise a grin too. We all remember the stone cold classic that was Thief in Garden. See also: Bird and Child, and Police and Gang. Another was simply known as Sausage. There arenâ€™t enough games based on cooking sausages these days. 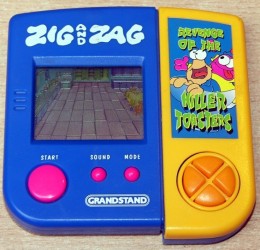 Despite all this I can see why people would want to start collecting retro handhelds. I still own a Nintendo Donkey Kong Game & Watch which was a birthday present a few years before I even owned my first console. It has sentimental value. A Konami TMNT game less so, but I still like to keep hold of it. Iâ€™m sure other gamers enjoy hunting for the handhelds they owned while growing up too, long before they were sold at jumble sales, handed down to younger family members or donated to charity shops. I imagine thereâ€™s also pleasure to be had by tracking down a full set of certain type of handheld, such as Bandaiâ€™s range of intriguing solar-powered LCD games.

Speaking of charity shops, I have been lucky enough to find a few handhelds over the years. A second Nintendo Donkey Kong Game & Watch which I wasnâ€™t going to let pass at Â£3, even if it was in worse condition than my own, a bootleg Biker Mice from Mars game (date unknown, but Iâ€™d guess 1995) a boxed Systema Space Adventure game in the shape of a boxing glove and a small Japanese handheld starring a cereal mascot.

I consider finding something like this a Holy Grail, and for that I can thank greedy eBay sellers with their ridiculous prices. Who would have thought that you could put a price on nostalgia?