Nintendo loyalists shouldn’t feel envious about the slew of big-name titles that have hit PS4 and Xbox One recently – this weekâ€™s eShop line-up is chock full of decent downloads. Making for a pleasant change, the upcoming discounts arenâ€™t too shabby either.

The Wii U is in line for six new arrivals this Thursday – three indie games and three Virtual Console releases – while the 3DS sees the release of Little Battlers eXperience (Â£34.99), which is also due out as retail release later this week. Developed by Level-5, this anime tie-in has gone down well with RPG fans. The Metacritic currently stands at 73% from 11 critics with no reviews below 7/10.

Those Wii U indie games, then. Thereâ€™s the predictably colourful Runbow (Â£10.99), a nine-player party game featuring both online and couch-based play. Nintendo has given this one a fair bit of attention and itâ€™s easy to see why – itâ€™s very Nintendo-like in design. Review scores so far include a 9/10 from Nintendo Life who called it â€œeasily one of the best games that has graced the Wii Uâ€. High praise indeed.

Gunman Clive HD Collection (Â£3.59) is well worth a look too, bringing together two 3DS eShop greats. Heck, weâ€™re even intrigued by the top-down Zombie Defense (Â£7.19) and thatâ€™s despite it being from the studio behind the terrible Rambo on-rails shooter from last year. Here’s the trailer:

As for the Virtual Console releases, Treasureâ€™s superlative N64 fast-paced shooter Sin & Punishment (Â£8.99) is making an appearance after last being seen on the Wiiâ€™s VC service way back in 2007. This brings the grand total of N64 games available on Wii U up to seven – the same number available on Xbox One via Rare Replay, incidentally. Why Nintendo are so lax on this front weâ€™ll never know. 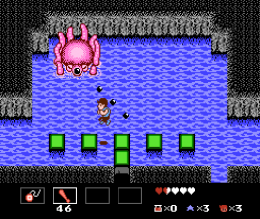 Thatâ€™s being joined by the Zelda alike duo StarTropics and Zoda’s Revenge: StarTropics II (Â£4.49 each).

Although developed in Japan, the StarTropics games were released only in North America and Europe. Another fun fact – 1994â€™s StarTropics II was the second to last official NES release, with Warioâ€™s Woods being the last. The first StarTropics is often referred to being the better out of the two. Weâ€™re going to go out on a limb though and say both are worth the asking price.

This leaves us with the weekâ€™s discounts. Wii U owners can get the magnificent Rayman Legends for Â£9.49 while the not-quite-as-magnificent Rayman Origins falls to Â£5.39 on 3DS. First-person curio Master Reboot meanwhile is being cut to Â£4.99 while the magical snow covered adventure Never Alone drops to Â£8.59. It may only take an evening to finish, but what an evening.