There’s nothing like selling yourself short. With over 350 glossy full colour pages, Richard Stanton’s (Eurogamer, The Guardian, Rock Paper Shotgun) A Brief History of Video Games can hardly be considered brief.

It’s not Stanton doing the short selling, but rather the bookâ’s publisher – this is the latest in a series of ‘Brief History’ books, ranging from A Brief History of King Arthur to A Brief Guide of Jeeves and Wooster. Variety is the spice of life and all that.

The fact that the author has chosen to cover gamingâ’s immensely broad history – from Atari to Xbox One – is both a strength and a downfall. Many books illustrating our most prestigious of pastimes already exist, with 2002’ The Ultimate History of Video Games and 2010’s Replay: The History of Video Games amongst the most renowned. However, the gaming industry has a history so rich and diverse that it’s always fascinating to read about it from a different perspective. The majority of gaming history books released in the past have also been from American authors, and as such glossed over such subjects as the UKâ€™s â€˜80s computer boom led by good old Uncle Clive.

Aside from a few insignificant systems, including the Amiga CD32 and the Atari Jaguar CD add-on, very little is pushed to the wayside. Stanton has even shrewdly chosen to give the golden age of arcade gaming its own chapter, rather than combining it with the heydays of the Atari 2600 and its competitors. The history of handhelds, including the legendary story of Tetris – which could fill a book in its own right – resides towards the end of the tome, and mostly focuses on Nintendo’s long line of systems. Mobile gaming, starting with the long lost classic that is Snake, also wisely has its own chapter.

Going back to the beginning of both the book and gaming, the early days of the industry are particularly well researched, detailing the numerous stages of development that Ralph Baer’s Brown Box prototypes went through before becoming the Magnavox Odyssey. Space War, nee Computer Space (the first arcade game) and Pong (often mistaken as being the first) receive a chapter each too, going as far as to detail the manufacturing costs involved. Highlighting a clear intention to avoid covering old ground, a few age old anecdotes are omitted – such as the first Pong cabinet on test breaking down because the coin box overflowed. Such stories, as wonderful as they may be, are already well established in gaming’s folklore. 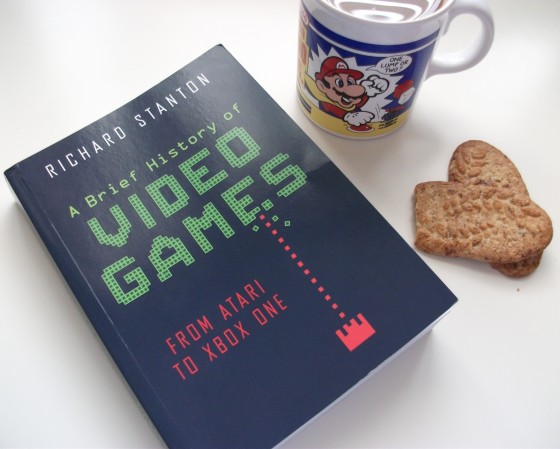 Showcasing a desire to cater for gamers far and wide, a few subjects receive unexpected focus. Case in point: the three pages dedicated to The Oregon Trail. For the uninformed, this was an educational affair for early computers and one thatâ€™s held dear by American gamers – for many, it was the first taste of gaming. It isn’t particularly well known outside of the US, but nevertheless itâ€™s an important part of gamingâ€™s back story. The Metal Gear Solid saga is another granted its own chapter. At 13 pages, not even the history of GTA – seven pages – can match it.

Ever the journalist, Stanton doesn’t hold back. Dragon’s Lair is rightfully described as a total dog of a game, the Donkey Kong Country games are billed as being very average, and Mortal Kombat is referred to as an appalling game when compared to Street Fighter II. No punches are pulled and while you may not agree, it makes A Brief History of Video Games a refreshing read.

From the 16-bit scene onwards, Stanton calls out the best each machine has to offer with standouts – such as Shenmue, Halo, Shadow of the Colossus, Ico, Bioshock and various Marios and Zeldas – receiving numerous paragraphs each. Pleasingly some unexpected titles are name checked, including Capcom’s God Hand, Comix Zone on Mega Drive and the side-scrolling SNES racer Unirally. Rare also gets a couple of pages in the limelight, with the company’s 64-bit glory days detailed.

Like the history of Rare themselves, the good times don’t last – the final few chapters lose a little steam after the eventful three way battle between PlayStation 2, Xbox and GameCube. Try as he must though, Stanton does his best to make the world of eSports seem more interesting than it actually is. The book ends with a long look at Valve and Steam, and the rise of the indie scene (including Minecraft) before looking towards gaming’s future.

Thoroughly – or rather painstakingly – researched itâ’s highly likely that A Brief History of Video Games will be used as a point of reference for years to come. Put down your joypad and pick up a copy.

‘A Brief History of Video Games’ by Richard Stanton, published by Running Press, is out now in paperback and ebook. Book supplied by publisher. Vintage Super Mario mug is reviewer’s own.