If you arenâ€™t already aware, or perhaps unable to tell by the screenshots alone, Q.U.B.E has a lot in common with Valveâ€™s much celebrated Portal. This too is a first-person puzzler which sees a mute protagonist journeying from one white walled testing arena to the next, harnessing the power of a far-flung technology. In this case, gloves that can manipulate coloured cubes. Although not as exciting to wield as Aperture Scienceâ€™s portal gun, they allow for a surprisingly varied puzzle assortment.

The plot is different enough from that of Portal and its sequel to escape plagiarism too, providing a sound explanation as why youâ€™re shoving blocks around in clinically sterile environments. To wit: a large alien craft formed entirely of cubes is heading towards Earth, and so youâ€™ve been sent on a heroic mission to try and destroy it from the inside. Quite how this is achieved by solving the puzzles within is never explained, but you do receive frequent progress updates via radio from a female operative at a nearby space station. Deep space travel has shot the protagonistâ€™s memory to pieces so a great deal of trust goes into everything the she says. Right from the outlet, the plot intrigues. 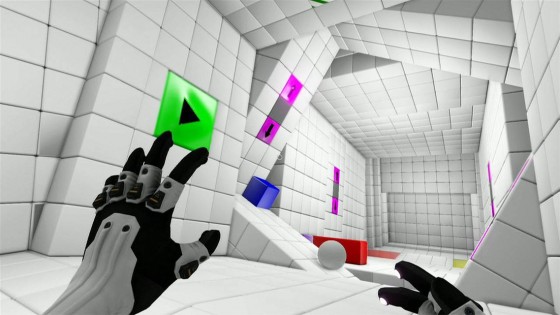 The same canâ€™t be said for puzzles. They start out simple – the level exits are often in clear view, so itâ€™s merely a case of leaping on bouncy blocks and extending cubes out the walls and ground to form bridges and staircases. Indeed, itâ€™s hard to imagine Portal veterans becoming flummoxed during Q.U.B.Eâ€™s opening hours. That said, the first few batches of puzzles don’t feel patronisingly easy. Theyâ€™re straightforward yet pleasing to solve. If ever in doubt, simply look towards the level exit and deduct a solution by working backwards. New blocks – each of which are colour coded – are introduced on a regular basis, while an air of mystery is added to the storyline after an unknown individual intervenes on the radio channel.

The alien craft comprises of seven sectors, each taking around 30-45 minutes to work through. Around halfway puzzles become physics based, introducing weighty balls that have to be guided along makeshift ramps and such into illuminated areas that unlock level exits. As per cubes, balls cannot be interacted with directly – only environment layouts affect their movement, and itâ€™s because of this that most of Q.U.B.Eâ€™s brainteasers can only be solved in a certain way. Later puzzles do however throw a couple of curveballs into the mix, adding the extra challenge of not only working how to unlock the exit but also how to reach it once the door has been opened. Secret puzzles feature too, tucked away down hidden paths and in the darkest depths of the test chambers. 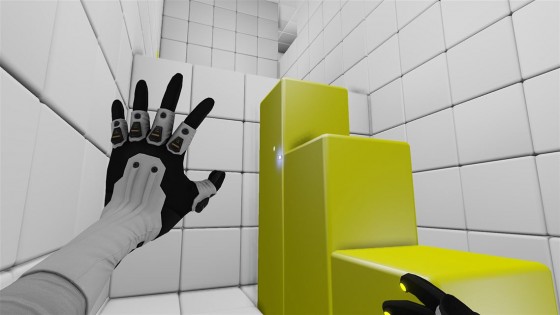 Towards the end of sector five Q.U.B.E hits a creative streak. Puzzles from here on in feel like theyâ€™ve had some serious thought put into them – the kind that seem impossible until a sudden â€˜eurekaâ€™ moment hits. The last few are, frankly, genius. Theyâ€™re completely different to what has been seen before, and without even a subtle hint as what to do. And then? After a dramatic conclusion the game comes to an end. Our competition time stood at just over four hours, with the only incentives to return being the aforementioned secrets and a time-trial mode.

The fact that Q.U.B.E doesnâ€™t hit its stride and fulfil its potential until thereâ€™s only an hour (or so) of playtime left cannot be ignored. To ignore the game outright however would be folly. Itâ€™s the very epitome of â€˜a neat little gameâ€™ easing you in with some gentle brain benders before putting your grey matter through its paces. Your time with Q.U.B.E may be brief, but itâ€™ll be well spent.