Computer and Video Games magazine went through several revamps during its 23 year reign. Weâ€™d wager that every reader has their own most cherished design, be it from the days when the pages were filled with DIY coding instructions, or when the cassette based formats were slowly dying out, paving the way for the likes of the Amiga, Atari ST and Mega Drive with their fancy 16-bit visuals. 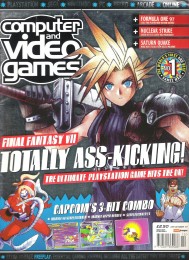 Arguably, CVGâ€™s mid-90s guise is the most remembered. It was a genuinely exciting time for gaming – the PlayStation and Saturn were battling it out, the N64 had presented us with some of the greatest games of all time, and PC gamers were busy showing off what their new, and highly expensive, 3D graphics cards could do. The Mega Drive and SNES were still kicking too, with the likes of Super Mario RPG, Yoshiâ€™s Island, Sonic 3D and the Donkey Kong Country trilogy pushing the limits of their respective systems.

There was certainly a lot to be excited about, and every month CVG would be filled to the brim with everything that had caught the teamâ€™s attention. There was no bias or prejudice – the esteemed likes of Castlevania: Symphony of the Night received just as much coverage as the big name, polygon packed, titles arriving that month. Actually we tell a lie, there was a slight bias at CVG – the team adored fighting games. Tekken 3 appeared on the cover a grand total of three times, would you believe.

Issue #191 from October â€™97 is a good example of the depth and appreciation beat’em up received. Street Fighter EX Plus Alpha and Marvel Super Heroes had four page previews, while the arcade version of Marvel Super Heroes vs Street Fighter – which was yet to have a home version announced – had two pages lavished upon it. Colourful pages at that – mid-90â€™s CVG had more energy and colour on display than a sugar-fuelled school disco. 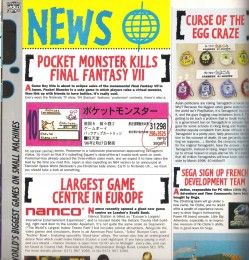 It was Final Fantasy VII that was the cover star though, with Cloud taking pride of place on the eye-catching silver foil front page. Squareâ€™s system selling RPG received a glorious eight page feature and a â€˜Making ofâ€™ in preparation of the impending European launch. â€œBest game on PlayStation? Over three million players canâ€™t be wrong: Final Fantasy VII is already a classic,â€ read perhaps the most positive review weâ€™ve ever laid eye on.

Despite near universal praise upon release, legend has it that FF VII went on to become the most returned game of all time. These days almost every new release has RPG elements of some description, but back then such RPG staples as levelling up, managing an inventory and turn-based battling were completely alien. After being lured in with a promotional campaign showing off the then jaw-dropping CGI clips, the typical PlayStation gamer didnâ€™t expect to be confronted with such a stat-packed and text heavy experience. 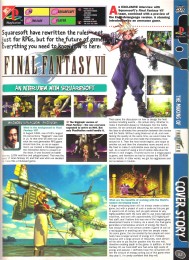 â€œA Game Boy title is about to eclipse sales of the monumental Final Fantasy VII in Japan. Pocket Monster is a cute game in which players raise a virtual monster, then link up with friends to have battles. Itâ€™s really cool,â€ read the piece, which speculated that Nintendo were about to announce an N64 version.

Also in the gaming news that month: Tamagotchi being branded a â€œsocial curseâ€ by Asian politicians, SEGA purchasing French studio No ClichÃ©, and the Namco Station arcade opening on Londonâ€™s South Bank. Previews meanwhile included the Saturn version of Quake, plus The Simpsons: Virtual Springfield, G-Police, Nightmare Creatures and the N64 shooter Robotech: Crystal Dreams. CVG reported that it was 60% complete and due for launch in November – just a month or two away. We all know how that turned out. 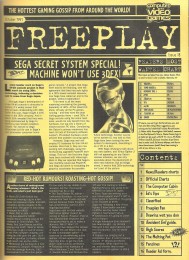 As well being indistinguishably excitable, the ‘Freeplay’ pages were reason to love mid-90â€™s CVG. Printed on cheap yellow paper, this section was dedicated to gaming rumours, charts, high scores, tips and cheats and also included the â€˜Retro Computer Cabinâ€™ page. Yes – CVG had a retro page back in 1997. Truly a magazine ahead of its time. Atariâ€™s Return of the Jedi took the limelight this month, along with fellow classics Lunar Lander and Scramble.

Less remembered is the â€˜Checkpointâ€™ page. Essentially a release calendar, it provided an early â€˜heads upâ€™ on what to save up for and what to â€œavoid like the plague!â€ This page resonates with us for a couple of reasons. Firstly, CVGâ€™s predictions were more often than not spot on – notorious N64 duo War Gods and ClayFighter 63â…“ had warnings against them this month, despite the fact that they were still a while off. Secondly, buyers for gaming stores used the information here for their purchasing decisions. We recall reading about one publisher going ballistic because CVG had put a warning against one of their titles, prompting a nationwide chain to cancel orders. Nowadays store buyers simply turn to Metacritic, and as you can imagine itâ€™s a very prickly subject. 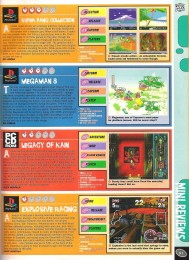 In the review section games were handed marks out of five. Reviews were presented in a not-quite-typical format, mostly comprising of screenshots with humorous or informative captions and boxouts detailing noteworthy features. It was evident that a lot of effort went into showing games at their best – an ethos we stand by here at Games Asylum.

Review text was kept brief – usually just a couple of paragraphs followed by a final word, and in some instances another reviewâ€™s opinion. In this issue the belated Saturn and PC versions of Resident Evil received separate reviews and each received a glowing 5/5. Abeâ€™s Odyssey and Nuclear Strike were given 4/5 while Last Bronx, Dynasty Warriors, Jurassic Park: The Lost World and the early N64 racer MRC scored 3/5.

As was often the case, a couple of games were given a critical mauling in the mini-reviews section. Both Explosive Racing and The Fantastic Four on PlayStation were handed a miserable 1/5. â€œAs a Marvel fan, I find the game abominable. As a fan of video games, I think it doesnâ€™t even come close to the gameplay of Mega Drive Streets of Rage.â€