Any number of developers could have easily produced a twin-stick shooter baring the Geometry Wars name. Activision thankfully chose not to take the easy route, opting instead to go that extra mile to find the right team for the job. That team was Lucid Games, home to numerous ex-Bizarre Creations staff. It’s times like these that make us think Activision does actually care about gaming culture, rather than simply selling copious amounts of software.

On first inspection Dimensionsâ€™ Â£13.99 asking price may seem a little steep. It doesnâ€™t take long to discover though that thereâ€™s plenty of bang for your buck here, including an adventure mode that proves to be a rather sizeable time sink. Itâ€™s an expanded version of the campaign found in the often forgotten Nintendo-exclusive Geometry Wars: Galaxies, featuring various score and time based challenges set in arenas of all shapes and sizes. Lucid must have something of a food obsession – one grid resembles a sausage; another a peanut. The challenge names too often reference foodstuffs. Good old British daftness in full effect, there. 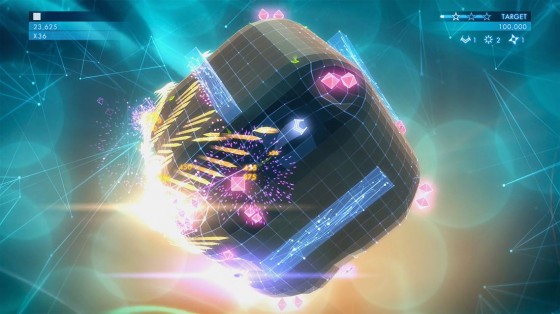 Each challenge has a potential three stars to gain. Meeting score targets for one star alone can take a considerable amount of attempts, especially during challenges in which only one life is given. In fact, it wasnâ€™t until weâ€™d upgraded our AI controlled drone a few times – a task that takes a couple of hours of play – that we bagged our first three star award.

Drones unlock through progression, helping to keep things fresh. The first simply provides extra firepower, while the second inhales the multiplier boosting â€˜Geoms’ dropped by enemies. Secondary drones meanwhile – which too can be upgraded – include an automated mine spawner. Proficient use can help topple previous high scores. The same goes for activating Super State power-ups, gained by destroying Geom-spewing blocks formations that appear on certain levels. 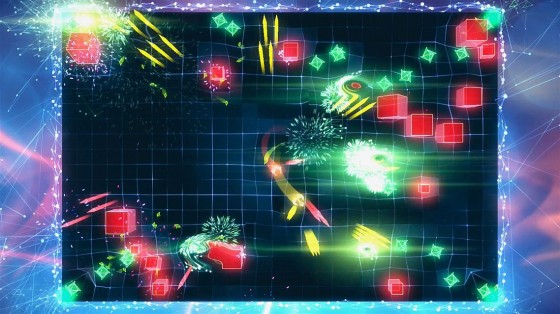 Especially when the score multiplier is in the hundreds, a few extra hits before the timer runs out can make all the difference. Every second really does count here, which turn makes Dimensions feverishly addictive. It also makes replaying previous challenges a joy rather than a chore. Fortunate, considering certain star quotas are soon required to progress.

Those who spent countless hours glued to previous Geometry Wars titles will be at a slight advantage. The majority of enemy types come from previous games and as such their attack patterns and method of movement instantly bear familiarly. That’s not to say new ground isn’t broken however. The inclusion of bosses battles alone takes Dimensions into new territory, each having patterns to learn and exploit. Boss battles bestow a single life and just one smart bomb, and as such they can be incredibly tense. Only Alien: Isolation has comes close to making us grip the joypad tighter this year. Newcomers shouldnâ€™t feel put off as plenty of time is given to master the basics before the first boss comes proverbially knocking. 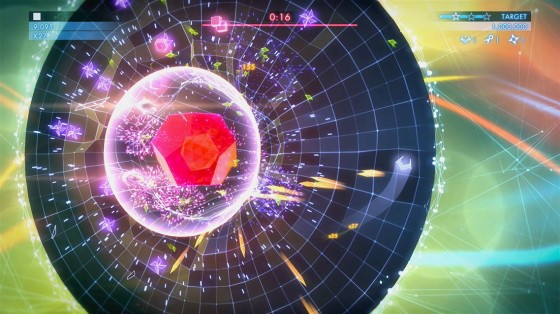 In addition to co-op play and leaderboards galore, the package is bolstered by a handful of returning arcade modes. Pacifism provides the tricky task of staying alive without the ability to shoot, while Deadline is Geometry Wars at its purest – a three minutes onslaught to achieve the highest score. King and Waves return too, now offering some incredibly high developer scores to beat and achievements for doing so. All arcade modes are accompanied by remixed music from previous games. You may be pleased to hear that itâ€™s only during boss battles that the music veers into dubstep territory.

Geometry WarsÂ³: Dimensions is a glorious mixture of concepts old and new, finely polished with current-gen sheen. Failure comes quick and often, but never feels unfair. You learn, you adapt and you stay alive. And with every passing moment you dare to take your eyes off the screen.