The menu music is all wrong. The in-game soundtrack is punky, as it should be, but I honestly have no idea what’s going on the bleepy electronic menu music. There are more significant things both right and wrong about this freemium incarnation of Crazy Taxi, but that’s what sticks with me.

What’s right is that it still feels like Crazy Taxi, despite being reworked as essentially an auto-runner. There’s inevitably a lot less flexibility – just swipe to switch lanes, swipe and hold to turn a corner, and hammer the screen to stop when you reach the drop off point – but it’s still fun to smash about the city, picking people up and dropping them off.

It’s not as much fun though. With limited controls, the satisfaction of smoothly weaving in and out of traffic is unachievable, and there’s a lack of opportunities to demonstrate much skill or to improvise: use your boost wisely, hit all the turns, and you’ll make it; miss a turn, and you’ll probably struggle. 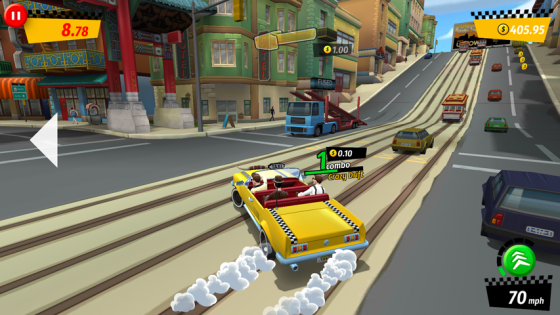 The more significant problem, though, is a combination of structure and monetisation. Having started life in the arcades, Crazy Taxi was already perfectly well suited to bite-size play sessions. Nevertheless, City Rush has reduced each mission to a tiny morsel. Not a problem in itself, but with a small fuel gauge, required to play the game, it’s mere minutes before you need to wait, watch an advert, or cough up.

And it doesn’t end there. Upgrades soon become distinctly pricey, in either of the two currencies, then there are timers to sit through – or pay to skip – for ‘delivery’ of the better upgrades once you’ve paid for them. There’s all kind of customisation tat. Pop-ups all over the menus.

It’s all just a bit much. The game itself is fine, but the strictly rationed super-short bursts of play aren’t enough to either pay for, or wait for.