Codemasters remained loyal to the 8-bit cassette formats right up until the market was almost diminished entirely. They were so heavily devoted, in fact, that technology had way surpassed humble cassette tapes – they were even able to release a ‘greatest hits’ collection for the Spectrum and Commodore on CD, simply requiring an everyday CD player and a cable to run. 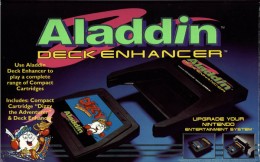 The 30-strong collection failed to sell, however, on the grounds that those who were able to afford a CD player in the early ’90s, had almost certainly already ‘upgraded’ to a PC, Amiga or one of the flasher cartridge-based consoles.

It was time to jump ship, and soon Codemasters struck a deal with Camerica. The US publisher produced the Aladdin Deck Enhancer – a gizmo that allowed unlicensed games to be played on the NES. Micro Machines, Big Nose the Caveman, Cosmic Spacehead, The Fantastic Adventures of Dizzy and more were released on unofficial cartridges that could only be used in conjunction with the peripheral, and as such not a single dime ended up in Nintendoâ€™s pocket. Nintendo sued on grounds of copyright law, but the courts ruled in Camericaâ€™s favour.

Even with steady support from Codemasters, the Aladdin Deck Enhancer failed to sell. The likes of Dizzy, Cosmic Spacehead and Big Nose the Caveman may have been relatively well-known in Europe, but over in the US those characters did perhaps come across as a little too peculiar. By 1992/1993 the NES was also starting to so its age, and SEGA’s aggressive Mega Drive marketing – mostly focusing on a certain hedgehog – only attributed to this. 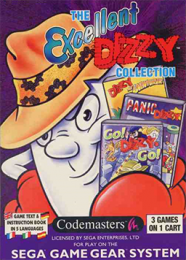 Codemasters went on to find themselves with three unreleased NES titles – Dreamworld Pogie, Go! Dizzy Go! and Wonderland Dizzy. Pogie was, for the uninformed, Dizzyâ€™s fluffy purple pet. Footage on the Oliver Twin’s website suggests that it was going to have more in common with Mario than Dizzy.

Plans were afoot to release the trio on SEGA’s 8-bit formats, but the publisher felt that the titles werenâ€™t strong enough to be released at full price. A Dizzy compilation cartridge was then considered, which resulted in Dreamworld Pogie getting the chop.

Another problem then occurred – Codemasters didnâ€™t want the collection to contain two adventure games, and so Wonderland Dizzy also ended up on the digital scrapheap. The loss isnâ€™t quite as bad as it sounds – it was merely a revamp of Magicland Dizzy, with alternative puzzles and a few new rooms.

Eventually, it was decided that Dizzy the Adventurer, Panic Dizzy and Go! Dizzy Go! would form The Excellent Dizzy Collection, a European exclusive for Master System and Game Gear.

Just like the axed Wonderland Dizzy, these werenâ€™t entirely new games. Dizzy the Adventurer was an enhanced version of Dizzy Prince of the Yolkfolk, the game that came bundled with the Aladdin Deck Enhancer. Panic Dizzy meanwhile was known as Dizzy Panic on the Spectrum, C64 and Amstrad. This leaves us with Go! Dizzy Go! which was first found the four-strong Quattro Arcade NES collection cart, alongside CJ Elephant Antics, Stunt Buggies and F16 Renegade. 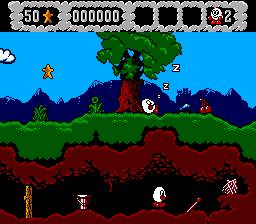 As the only adventure game on the cartridge, Dizzy the Adventurer was predictably the most substantial offering. Controls were intuitive, with one button to jump and the other to access the inventory. Only three items could be held at once, but as the level design started to become familiar over time, you soon learned which items would be required almost immediately and those that could be left behind for later.

The puzzles meanwhile were pleasingly logical – it was very much a game that was quite happy to call a spade a spade and be done with it. There were also 50 magic stars to keep an eye out for, hidden way up in the clouds and deep down underground. Fifty however was a much smaller number than what hardened Dizzy fans were used to – Fantastic Dizzy, in comparison, required 250 to enter the final area.

Go! Dizzy Go! was the easiest of three games – a single screen maze-based puzzler with generous time limits. Think along the lines of The Adventures of Lolo on the NES, or Pengu for the Game Gear.

The story saw Dizzy out to rescue his friends, a task that was achieved either by collecting all items (fruit, usually) inside a maze while avoiding enemies or via some simple block-shoving puzzles. Other levels restricted Dizzyâ€™s movement, and so the eggy adventurer had to be bounced off blocks and walls. 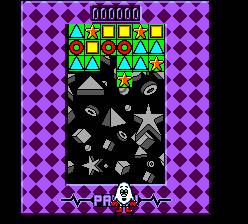 Panic Dizzy was another puzzler, but this one had more in common with Columns. It was Columns in reverse, pretty much – the screen was half-full of blocks to begin with, which then had to be rearranged to form vertical lines of four of the same type. Horizontal lines didnâ€™t count. It was a more demanding puzzler than most – having to move a quarter (or thereabouts) of the blocks around just to form one line wasnâ€™t uncommon.

This was where planning ahead came into play. Trying to form more than one line of identical blocks at once was critical on the harder difficulty levels. Two other modes were also included for good measure – one which replaced the shapes with dice, which were hard to make out on the Game Gearâ€™s fuzzy screen, and another that entailed unjumbling a jigsaw puzzle. If there was more than just one picture, it may have held our interest for slightly longer. 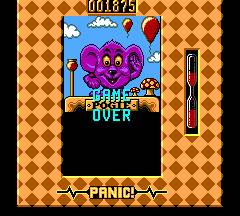 One notable thing is that these three titles werenâ€™t simply crammed onto a cartridge. Presentation was surprisingly lavish, including a number of speech samples. Visually it was typically colourful too, although the art direction was inconstant between games, while the music was jaunty no matter which of the trio you were playing.

After the release of The Excellent Dizzy Collection the Oliver twins left Codemasters and the rights to the Dizzy IP ended in limbo, apparently â€˜sharedâ€™ between the twins and what was left of Codemasters. It wasnâ€™t a bad way for the egg to bow out, although the fact that copies are hard to find would suggest that it didnâ€™t sell as well as it deserved.

Perhaps we should just be grateful they didnâ€™t call it the â€˜Eggscelent Dizzy Collectionâ€™ – with puns aplenty in the Dizzy games, that name must have been considered at some stage.