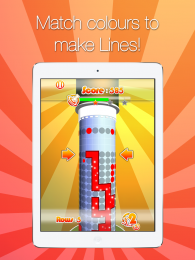 Itâ€™s not so much a â€˜match-fiveâ€™ puzzler then, but a â€˜match as much as you canâ€™ puzzler. Levels are brief, lasting around two minutes, and each has target scores to beat along with a potential three stars to unlock. Itâ€™s a pretty typical set-up, although there are few games out there as bold is this when it comes to presentation. We canâ€™t even remember the last game to feature a mellow jazz soundtrack.

For all its good intentions, Lines soon emerges to have a problem. A catch-22 situation, if you will. The rows of dots descend so rapidly that you donâ€™t really get time to think. Weâ€™re talking just a few seconds here. The cylinder can be rotated, but in the time it takes to spin it around the next row of dots will already be on their way. Sometimes you just have to hope for the best, and more often than not â€˜lady luckâ€™ will be on your side – the rows usually contain three or four dots of the same colour, and so elaborate shapes start to form even if you find yourself without time to turn them. Your score keeps on increasing, and all youâ€™re really doing is watching the dots fall and match themselves. You wonâ€™t get a three star level rating this way, but you may beat some of the earlier stages with a one star rating. 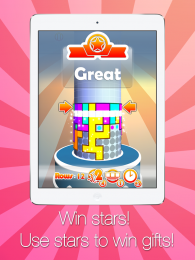 Now hereâ€™s the thing – if ample time was given to turn the rows and rotate the cylinder, Lines would become ridiculously easy. Forming a shape from the bottom to the top of the cylinder every single game probably wouldnâ€™t be out of the question. Like we said, it finds itself in a catch-22 situation.

The developer seems to be aware of this – the focus is on beating certain scores, and not forming certain amounts of lines. Those target scores soon escalate, and so on several occasions we found ourselves reaching the top of the cylinder and still way short of the target score. To begin with the game is quite generous with power-ups, including a score multiplayer that will get you out of said jams. Once these have been used up though, you really have to knuckle down and try your best to work with the gameâ€™s light time-limit. Focusing on joining dots of just one or two colours helps, but itâ€™s not long until different coloured dots are added into each row.

We may be painting a pretty bleak picture about Lines here, but thatâ€™s really not the case. Itâ€™s likeable enough, certainly, even if you do have to wait a short while for additional retries once your stockpile has been depleted.

This is one is cruel yet colourful mistress. It’s also one that you should consider trying. Just be sure to search for Lines – by That Wonderful Lemon Co. otherwise you’ll never find it on iTunes.