Weâ€™re all guilty of something, but rather than fill these hallowed pages with our sinful confessions weâ€™re instead going to share our top five gaming guilty pleasures.

All of the games below faced a harsh critical reception upon release, but despite their faults they arenâ€™t entirely without merit…no matter how dubious those merits actually are.

Oh, Dead Island. You wowed us with your fancy CGI trailer, but when you finally showed up you reminded us of how first person shooters used to look and feel ten years ago. Glitches were frequent and sometimes game ruining, while gun fights left a lot to be desired. Then there were the comically poor mission objectives, such as the quest to reunite a full grown woman with her teddy bear.

The long sandy beaches, holiday villas and tropical rain forests do make a welcome change from war torn environments though and exploring these sun-drenched – either by car or on foot – locations can be pleasure when not being pestered by the undead. Even when under attack the fact that you are never penalised too heavily for dying keeps the level of frustration low, as does the way you simply restart a few yards back from where you snuffed it. Playing with others online certainly elevates the tedium of the mundane missions too, particularly during of the final, linear, prison level.

Somewhat annoyingly, Techland never learned by this mistake – the last mission in Riptide also forced the player down dull corridors. A far cry from the open the environments both adventures began in.

Once tipped to be the game that would sell the Kinect to â€˜hardcoreâ€™ gamers – or whatever term Microsoft uses nowadays – it ended up being the game that solidified the fact that Kinect games are best kept simple.

Sega’s Rise of Nightmares was something of a nightmare to play, mixing first person hacking and slashing with QTEs and the odd puzzle or two, yet there are some questionable thrills to be had.

Just like a low budget horror movie, the dialogue is so corny and badly delivered that it somehow manages to entertain. Watching other player try to get to grips with the clumsy controls while struggling to succeed at even the most basic of QTEs can likewise prove entertaining. Weâ€™d wager that this is why dozens of Rise of Nightmares â€˜Letâ€™s Playâ€™ videos on YouTube have astonishingly high amounts of views. We all love watching somebody make a fool out of themselves.

At least Sega did get the combat right – hacking the limbs off the various monsters that lurk in the dank corridors is relatively satisfying, and thereâ€™s a very long list of weapons to do so. The gardening sheers in particular make the task of decapitating zombies seem as simple as pruning an overgrown bush.

When playing this shootâ€™em up sequel we can see why review scores were incredibly mixed – everything from 1/10 from Destructoid to 9/10 from The Official Xbox Magazine. Itâ€™s hardly the most intellectually challenging game out there – make a shotgun your weapon of choice and you can run and gun your way through it in just a few hours – but the Shanghai setting is a memorable one.

The slums, poorly kept apartment blocks and neon-hued city streets are well realised, and we can recall spending a good five minutes or so looking at the names of spoof movies that line the shelves in a dodgy backstreet DVD store. Shame we canâ€™t erase that tasteless razor blade torture scene from our minds. What a blatant attempt at causing controversy that was.

The pretty decent online ‘Cops & Robbers’ mode did fortunately go a long way to making up for the story modeâ€™s shortcomings. Rather than a standard deathmatch, it saw players team up to pull off a four-minute long heist. The twist was that it was possible to back stab other team-mates to steal their loot, adding a very welcome element of unpredictability.

Weâ€™re not going to go overboard and herald this to be a hidden gem, but after having such a troubled development it did turn out better than expected.

You may be surprised to learn that this retro revamp even cause us to laugh out loud on more than a few occasions. Not because of the ability to pull enemyâ€™s limbs off and then use them as weapons – although, admittedly, there is some pleasure to be had there – but because Rickâ€™s Death Mask has many decent one-liners. â€œI bid you good day, sirâ€ the mask quips in a posh English accent, while Rick performs brutal finishers on the assortment of demonic demons. Silly voices are something of the maskâ€™s speciality, later putting on a high-pitched female voice in order to mock the danger Rickâ€™s girlfriend is in.

As an extra bonus, the three 16-bit Splatterhouse games could be unlocked including an uncensored version of the Japanese arcade original. For fans of the series, that was a deal maker even after the middling reviews surfaced. 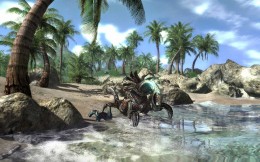 We very nearly chose fellow relatively obscure European RPG Risen over this, but Two Worlds is the slightly slicker package. The emphasis is on the word â€˜slightlyâ€™ there, mind you.

Itâ€™s the level of freedom that kept us playing Two Worlds for longer than expected – caves, long sandy beaches, villages and abandoned buildings can be explored at free will and usually have something shiny and rare inside. Just to illustrate how much time we spent going off the beaten path, one of the first achievements we unlocked was for discovering 50 locations.

As embarrassingly poor as it is, the voice acting never fails to raise a grin – â€œOoh, thatâ€™s cold!â€ the gameâ€™s protagonist proclaims when entering a pool of water.

A battle hardened hero, there.