This week sees the release of a hotly anticipated bat-based sequel that has so far remained hidden in the shadows, muttering quietly in an oddly deep voice. 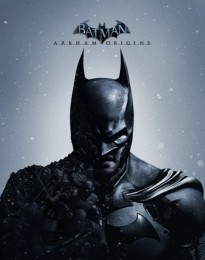 Batman: Arkham Origins makes its way on to Xbox 360 and PS3 (and PC), alongside Batman: Arkham Origins Blackgate on the PS Vita. Earlier games in the series, Batman: Arkham Asylum and Batman: Arkham City were both rather good, developed by London-based Rocksteady Studios. This year Warner Bros. Games Montreal were at the helm, and things have been suspiciously quiet, with most reviewers yet to receive review copies. Make of that what you will…

Eager guitarists might be pleased to see Rocksmith 2014 Edition this week, which lets you plug a real guitar into your console and attempt to play various songs. Muse’s Knights of Cydonia is on the track listing, so, that’ll be useful if you want to learn how to play that on guitar instead of Muse’s better, earlier work.

Wii owners rejoice, as this week sees the release of Wii Party U, which oddly enough Nintendo are charging money for, but it does come with a Wii Remote Plus, which sort of justifies the price tag.

If you like turtles, specifically teenage ones with martial arts skills, then you’ll be pleased to know Teenage Mutant Ninja Turtles is also out this week, on Xbox 360, Wii and 3DS. Who doesn’t like heroes in a half shell?

Remember when rally driving games were great, back in the ’90s? Sega Rally and Colin McRae. Ahh, those were the days. The PS2 even saw some great WRC games from DriveClub developers Evolution Studios. Sadly, WRC 4: World Rally Championship is from a different developer entirely, and whilst reasonably serviceable as a rallying game, it’s no Colin McRae. But Xbox 360, PS3, Vita and PC owners can enjoy it this week – hurrah!

Naruto Ultimate Ninja Storm 3: Full Burst is also a game, that some people who own an Xbox 360 or PS3 might buy. Then there’s Deus Ex: Human Revolution – Director’s Cut, for Xbox 360, PS3 and Wii U owners who want to play a slightly updated version of a two year old game.

Nippon Ichi fans finally get to play with The Guided Fate Paradox on PS3. It came out in Japan back in January, and like most Nippon Ichi games, it’s a quirky dungeon crawler. Metacritic gives it a score of 76% – which kind of sounds about right.

On the digital download front, there’s zombie island survival simulator How To Survive for Xbox 360, PS3 and PC. If your idea of dream holiday involves being stranded on a zombie infested island, finding shelter, building makeshift weapons and running away from zombie hordes, this could be just your kind of game. It’s a bit like State of Decay, which was excellent, so we have high hopes for this one.

Then there are some other titles you really shouldn’t care about, such as Just Dance Kids 2014, Brain Training 3D and Beyblade: Evolution. There may have been others we missed. Don’t worry about those though. Why would you want to buy those games?

Next week, Assassin’s Creed IV: Black Flag brings us pirate themed assassination, EA release a very big first person shooter known as Battlefield 4, whilst wrestling fans will get to play with WWE 2K14. There may be other games too.