It was only a couple of months ago that Activision announced that they have another Ninja Turtles game on the way. The major difference between the two – other than this being a download and the second game being destined for retail – is that the retail iteration remains truer to the cartoon series, whereas this effort from Red Fly displays some artistic flair with the character designs.

We wouldnâ€™t like to be the ones in charge of the retail Turtles game, as Out of the Shadows sets the bar for future Turtles titles mighty high. Weâ€™d even go as far as saying that itâ€™s the best Turtles game since… whenever the last decent one was. Talk about setting yourself up for a fall, eh?

Right from the start itâ€™s clear that Red Fly have a love for the license, similar to the way High Moon displayed a sense of passion in their two Transformers games and the recently released Deadpool. The title screen features Partners in Kryme’s track from the original movie, while the art direction carefully blends elements from the new and old Turtles series to make the green-skinned foursome appear more human-like than reptilian. By that we mean nostrils. They have nostrils now.

The story is spilt across four levels lasting around an hour each, starting above New York and ending deep below. Itâ€™s hardly a complicated story – and itâ€™s also lacking appearances from key characters from the show – but it flows nicely and at around 4-5 hours it doesnâ€™t overstay its welcome. Multiple plays are clearly intended – the amount of upgradeable and unlockable skills is so vast that the chance of obtaining them all first time round are slim.

Somewhat unsurprisingly given the Turtles games of yore, the bad guy body count is notably high. Changes of pace from bad guy bashing come from some Assassinâ€™s Creed-style rooftop running and platforming, entirely optional stealth sections, and the addition of a simple yet pleasing hacking mini-game. Towards the end the number of these mini-games increases seemingly to pad things out until the final boss battle, which suggests that Red Fly didnâ€™t quite have enough time to get the game up to the standard they would have liked.

Still, what is here is pretty good stuff. Neat touches are in abundance, such as the way Michelangelo amusingly burps in the face of his enemies when countering and the how the Turtlesâ€™ sewer HQ – which acts as a hub – fills up with mementos from battle as the story progresses. Visuals are sharp and detailed, backed by some flashy lighting effects, while the soundtrack from hip-hop producer Just Blaze keeps the pace fast flowing and adds some glitz to the proceedings. 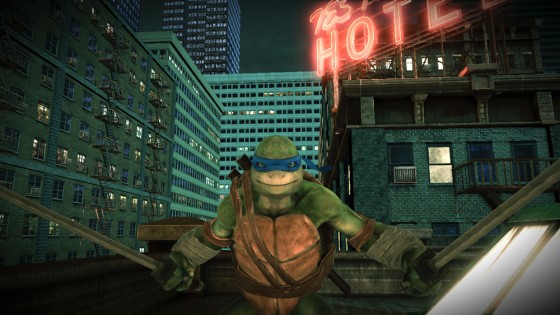 No expense has been spared with the vocal work either. The hard-shelled heroes are an incredibly chatty bunch, constantly asking one another daft hypothetical questions and commenting on their surroundings. Weâ€™re can’t say that we’re quite so keen on how Mikey now yells â€œBooyakasha!â€ instead of â€œCowabunga!â€ mind you. Even the evergreen Turtles have had to move with the times, we suppose.

Anyway, we digress. Combat is based around a typical set-up of two attack buttons and the ability to counter and evade. Although the animation isn’t quite as seamless, there are some similarities to be made with the combat system found in Rocksteady’s Batman games.

Countering is a relatively easy task thanks to how enemies emit various coloured glows before attacking: white for attacks that can be countered; red for attacks that can only be evaded. Once a power-bar has been filled a large array of special finishers can be pulled off, as well as tag-team moves that often raise a smile. The latter are quite a rare sight and therefore remain a novelty until the end. Also pleasing is the ability to counter two enemies at once by one well-timed button press.

the best Turtles game since… whenever the last decent one was

A combo meter adds a further degree of depth, with extra XP awarded for high combos ending in high figures. It can be quite tricky to keep a combo going for long periods, and thatâ€™s not a bad thing.

Although youâ€™re asked to choose a Turtle before heading into battle, itâ€™s possible to swap between the four green-hued dudes at any time, with the AI taking control of the other three when playing in single-player. Their attacks vary slightly – Raph uses a lot of grapples, for instance, while Mikey can spin around on his back to attack enemies in quick secession. Taunts play a big part too, able to boost defences or increase damage levels temporarily.

When your chosen Turtle is downed youâ€™re automatically placed in control of another, and if all four have snuff it youâ€™re sent back to the last checkpoint. In some places these can be frustratingly far apart. Fallen Turtles can be revived but only once per area, and because of this itâ€™s wise to use health packs sparingly, especially during the surprisingly challenging boss battles. Health packs become very short in supply during the final level in particular, which is something of an issue when playing co-op online with greedy other players.

Thankfully, there are weapon upgrades to help improve chances. These can be selected back at the sewer HQ and are a neat little assortment. Leo can combine and throw his swords, Raph gets some metal boxing gloves, Donnie an anti-gravity device and Mikey gains a blade on the end of his nunchucks.

Also back at the HQ thereâ€™s the chance to play a side-scrolling arcade game thatâ€™s a clear homage to the classic 1987 arcade game. Itâ€™s a simplified version of the main game, removing the inventory and recycling some of the assets. Splinterâ€™s dojo meanwhile allows for combo training and more, if required.

As a whole, Out of the Shadows is a very likeable package thatâ€™s not only bound to please Turtles fans both old and new, but is also a decent brawler in its own right. We even (whisper it) prefer it to the recent Deadpool game – the combat is slightly deeper, not to mention flasher, and thereâ€™s a greater incentive to return once the story mode has been beaten.

Is it good enough to restore our faith in how Activision handles their licensed games? Well, we wouldnâ€™t go that far…