EDGE has reached the ripe old age of 20. If it were an actual videogame it would be contender to appear on the cover of Retro Gamer right about now. 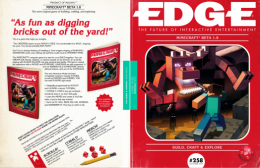 Speaking of which, to celebrate the magazineâ€™s birthday the latest issue – which goes on sale today – features twenty different covers inked by various industry folk and artists, including Wil Overton and the curiously controversial Phil Fish.

The covers are intended to take us on a trip from 1993 to 2013, starting with DOOM and finishing with Fez.

Minecraft has to be our clear favourite due to its retro design. Weâ€™re also fond of Wil Overtonâ€™s Zelda cover which, remarkably, doesnâ€™t star Link.

Here are the twenty covers in their full glory:

As well as the usual previews and reviews, this months’ issue takes a look at the ten best consoles from the past 20 years. We’re pleased to report that the humble Dreamcast made the list. Thereâ€™s also an article featuring seven games that EDGE believes they really should have given a perfect score first time round but didnâ€™t.

As of now Goldeneye 007 is officially an EDGE [10], as are both Dark Souls and Advance Wars. Hurrah!

If you want to get involved with the celebrations a poll is currently underway to determine readerâ€™s top 20 games from 1993 onwards. You can read more and about it and enter here.