Itâ€™s the narrator of this four-player co-op shooter who steals the show. The incredibly camp chap mocks your every death and often goes off topic, even starting one match by talking about his commute to work. If this doesnâ€™t tell you that God Mode has a pleasingly daft streak, then we donâ€™t know what will.

As a descendant of a long forgotten God, youâ€™re thrown into the pits of Hades and ordered to fight your way through hordes of mythical creatures. Thatâ€™s as complex as the plot gets â€“ thereâ€™s no unfolding storyline, and the only cut-scenes are those at the start of a match which briefly show what lies ahead in the assortment of arenas. Considering it’s meant to be a tribute to the fast-paced and relentless arcade shooters of yesteryear, this suits us just fine.

The set-up is pretty typical for a third-person shooter. Thereâ€™s a two weapon limit, along with the ability to run and forward roll out of harmâ€™s way. There’s also an optional skill which has to be charged before use. These skills – including the titular God Mode – are unlocked as you rise up the ranks, as are new weapons and character customisation options.

One nice touch is that itâ€™s possible to level up slightly quicker by activating a â€˜Oathsâ€™ in return for an XP boost, such as going into battle without a shield. 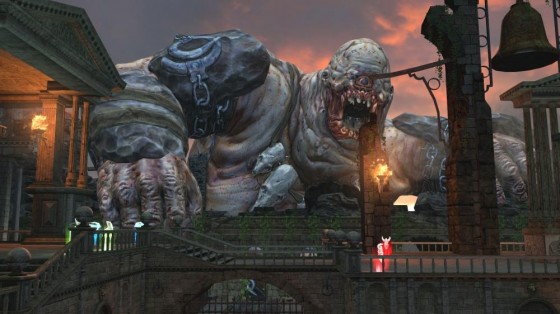 Players shares lives – with the maximum of three other players, twelve are at the disposal of your team. As such, our fingers were always crossed that we hadn’t been paired with somebody who can’t even make it past the first couples of waves without dying.

Enemies come thick and fast, although the emphasis there is on the word ‘thick’ – they aren’t the brightest bunch. At least they all have their own attack patterns. Zombies are keen to surround players in vast number, cyclopses and minotaurs charge at your location when enraged, and often skeletal archers perch themselves up high and rain arrows down onto Hades’ battlefields. Once all enemies have been defeated a glowing portal opens up to take you to the next location. The fact that you’re constantly on the move from one arena to another gives matches a sense of progression, and helps to keep the pace flowing swiftly.

The couple of screen-filling bosses which feature add a bit of variety to the proceedings too. Pray that your team has more than one life left before facing these colossal beasts – some of their attacks can wipe out full health bars in one fell swoop.

Survive until the end and youâ€™re rewarded with a two minute spree inside a small room filled with gold. Friendly fire is activated during this round, and weâ€™re pleased to report that only once did another player open fire upon us. It was almost enough to restore our trust in humankind.

Another feature that prevents tedium setting in is that every arena offers a random â€˜Test of Faithâ€™. Or match mutator, if you prefer. It’ll take a good couple of hours to witness all of them as they’re surprisingly high in number. Some of these work in your favour, such as granting unlimited ammo, extra goodies and AI allies to battle alongside. Others however make matches trickier – bombs come falling from the sky and arenas become filled with smoke which temporarily obscures vision. There are a few nonsensical â€˜Tests of Faithâ€™ too â€“ a good example is one which distorts the sound effects and music by speeding them up a notch.

If only the weapon assortment had this much imagination put into it â€“ itâ€™s the usual array of pistols, machine guns, grenade launchers and shotguns. Quite the dull assortment given the long list of fantasy creatures you’re up against. The majority of these weapons also rather useless due to their slow rate of fire. In actual fact, we found ourselves sticking with the SMG you start out with. Once upgraded it out-performs even some of the weapons which arenâ€™t available until youâ€™ve sunk several hours in.

Itâ€™s hard to say though if anybody will want to invest time into this one. Even for an 800 MSP XBLA title it’s light on content â€“ after just a couple of evenings’ worth of play we were left wishing there was a bit more to it. We also found that with any less than two other players the chances of making it to the end are incredibly slim.

That cheerful narrator is clearly destined for bigger and better things.