It would seem that after years of making niche titles such as The First Templar and the â€œbanana republicâ€ city building series Tropico, Haemimont Games has had to bite the bullet and create something with a more mainstream vibe.

Indeed, itâ€™s not hard to imagine somebody picking up a copy of Omerta off the shelves expecting it to be another L.A Noire/Mafia II-style free roaming gangster game.

Thatâ€™s not the case though â€“ itâ€™s a strategy sim with turn-based combat. Those who have played the underrated Tropico will feel a sense of familiarity as it would appear that the developers have recycled Tropico 4’s engine. This results in Omerta having very similar presentation and a near identical visual style. One thing that surprised us about the Xbox 360 versions of Tropico is that the control systems were transferred brilliantly to the Xbox 360â€™s joypad. Thankfully the same goes for Omerta â€“ the amount of menus has been kept to a minimum and theyâ€™re pleasingly simple to navigate.

The premise is to set up a 1920s gangster empire. This is achieved one neighbourhood at a time, with each having different missions objectives and threats. After creating your own mob boss youâ€™re then able to hire and fire henchmen and send them out to do dirty work. At the start only three henchmen are under your control but as the journey into organised crime progresses additional gangsters join your cause. They have slightly different personalities and skill sets â€“ compiling a mob with talents that complement each other takes a little experimentation.

When entering a new neighbourhood the first thing on the agenda is always to find an informant and shake them down for info. This will reveal the whereabouts of various places of interest, including secret bars and the homes of other crime lords. Some informants will take a cash bribe, while others require booze to loosen their lips.

As the game is set during a probation period, booze is in high demand. Distilleries and breweries can be set up on the sly inside rented residential properties. These provide a steady source of income, especially if there’s an illegal bar in your posession. Weapons too can be smuggled and bought on the black-market. Occasionally these have to be used as bribes as well. We found that generally money wasnâ€™t hard to come by â€“ it doesnâ€™t matter where on the map you place your illegal businesses as they always make a profit. If, for some reason, money does become tight you can always send the henchmen out to burgle citizens’ homes and raid rival businesses. 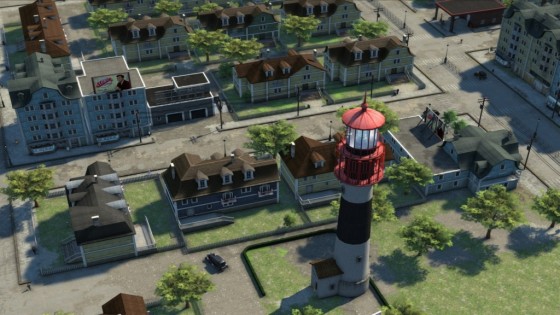 Such activities will increase your â€˜heatâ€™ level, and if this gets too high then the police will come knocking. A bribe will keep them quiet, or the finger can be pointed at a scapegoat. Itâ€™s also possible to get politicians and deputies into your good books by turning up on their doorstep with a gift.

The top of the screen shows your current â€˜likedâ€™ and â€˜fearedâ€™ rating. Setting up soup kitchens and running charity events will improve your public image, while shutting down rival businesses and such will increase the fear level. Sometimes in order to progress a mission a certain â€˜likedâ€™ or â€˜fearedâ€™ level has to be reached. Fortunately there are people on the black-market you can hire to improve the rating of either for a one off payment.

Mission highlights include trying to take over a gambling syndicate in a sea-side district â€“ which includes playing a boxing mini-game â€“ and trying to help a black community deal with the KKK and get back on their feet. Progress can be slow during missions as only so many businesses can be set up per neighbourhood. When theyâ€™re all under your control all you can do is sit back and watch the coffers fill with cash. Money earned from one mission canâ€™t be transferred over to the next either, which really hampers the sense of progression.

Thatâ€™s the least of Omertaâ€™s problems. The visually crude combat system feels like something from the past. The concept in theory alone is sound, but sloppy execution ruins it. Each gang member has a set amount of AP and MP â€“ attack points and movement points â€“ and a line-of-sight system is in place. The clearer view you have of an enemy, then the more damage can potentially be dealt. The same goes for when the opposition attacks. If they canâ€™t see you, then as far as theyâ€™re concerned you donâ€™t exist.

This results in some very unlikely scenarios where if an enemy is crouching behind a crate and a henchman is stood in front of it, then they canâ€™t see one another. Taking cover behind objects is a total pain â€“ the cursor has to be placed exactly in the right place, otherwise your cohorts will simply stand out in the open. Poor map design doesnâ€™t help here. Some battles start in areas with no cover at all, while in some instances the only places to take cover are those facing the enemy.

Frustration doesnâ€™t end there. A percentage is shown above an enemyâ€™s head showing the chance of hitting them but the odds always seem against you. Missing several shots in a row even though youâ€™re told you have a 70%-odd chance of a hit is a regular occurrence. This makes battles incredibly maddening as all sense of logic has seemingly gone out of the proverbial window. You’ll be needing luck rather than skill here. 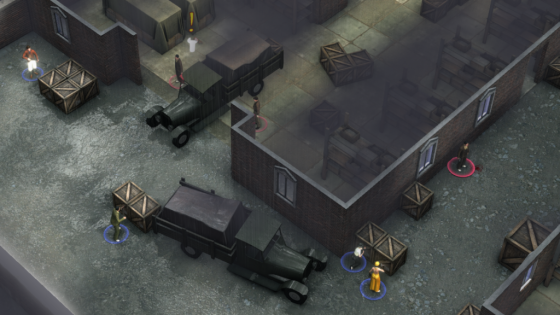 Whatâ€™s more is that even after the lengthier battles rewards are minimal. In fact, in most cases youâ€™re informed that a one or two of your henchmen have suffered a fatal wound and will never perform at their full potential ever again. Itâ€™s almost as if youâ€™re being penalised for winning. You can choose to auto-resolve battles, but seeing that most of the achievements are linked to combat we felt we would have missed out if we had done so.

Itâ€™s a bit of a shame, really. Despite the developerâ€™s good intentions to bring something slightly different to the Xbox 360, Omerta is a lot of hard work for very little reward.