When Mortal Kombat vs DC Universe was released, we felt a bit sorry for NetherRealm Studios. Not only did they have to pen a script to explain why Batman and Superman were at each other’s throats, but they also had to fit the outlandish cast of Mortal Kombat characters into the mix.

Until a Justice League movie is made, this is easily the next best thing

With all things Mortal Kombat out of the equation and a long list of DC characters at their disposal, NetherRealm Studios has now been able to craft a storyline that’s a lot more coherent. You could even say itâ€™s pretty good. After activating a nuke purchased from Lex Luthor, the Joker inadvertently transports himself and Batman into an alternative world. In this universe Superman is evil and has used his unstoppable powers to forcibly recruit other superheroes to his cause. Batman is now a wanted criminal, while the Green Lantern has become the Yellow Lantern, having accepted that fear is stronger than will power. All 24 characters show up at some point and get the chance to show off their skills, and along the way some very unlikely alliances are made.

The story mode takes around three hours to finish, with each of the twelve chapters providing a different character to play as. The cut-scenes are entertaining to watch â€“ the character models are full of detail, while the superheroes’ facial expressions successfully manage to covey emotion. Voice-acting impresses also, backed by plenty of decent one-liners and witty comebacks. Until a Justice League movie is made, this is easily the next best thing.

One thing that we did notice though is that when retrying a battle the opposition will be incredibly docile the second time around. We assume this has been done to prevent frustration. The downside of this is that it does make the story mode rather easy â€“ only during the last chapter did the opposition start to put up a good fight.

At least a few mini-games have been thrown in to keep players on their toes. The best of these is an archery mini-game set from a first-person perspective. They arenâ€™t anything fancy, but they do provide a chance of pace for the minute or so that they last. 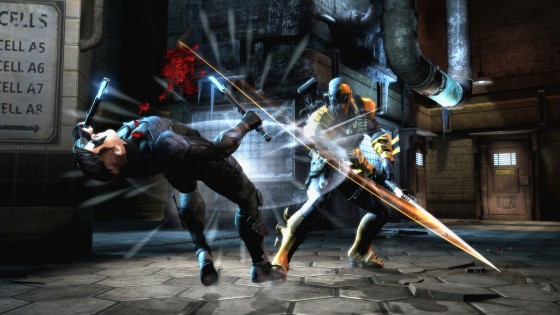 The fighting system itself felt alien at first due to being slightly different from the usual set-ups found in other one-on-one brawlers, but after an hour or so it did eventually â€˜clickâ€™. Three buttons are used for light, medium and heavy attacks with the remaining button used for character specific moves – in most cases either to ready a projectile attack or to change weapon, as is the case for Nightwing and Wonder Woman. Blocking is handled by pushing back, and as such even novices shouldn’t struggle to block several attacks in a row. Mastering â€˜burnâ€™ moves and learning â€˜wake upâ€™ counters isnâ€™t quite as simple, but thankfully the practice and tutorial modes are both very comprehensive. Then there’s ‘clashes’ to take into account, in which you can wager a percentage of your health bar.

Each character also has a super move which can be unleashed after a gauge is filled. These short animations are impressive to watch. Or at least they are for the first dozen or so times. Thankfully itâ€™s not too hard to escape these moves when used by the opposition. Most can be easily blocked and in a few instances itâ€™s even possible to leap out of the way.

Like the character models, the backdrops look the part. The colour palette is heavily muted throughout, giving the environments a gritty look and feel. Not only are the backdrops impressive in size, but they can be interacted with as well. Objects can be grabbed and thrown, while getting forced into a corner and beaten to a pulp rarely happens as most areas have items in the background to leap off. Walls can also be broken â€“ the â€˜transitionsâ€™, as theyâ€™re known, are vastly entertaining. These short animation sequences see your hapless rival take a pounding as theyâ€™re flung from one area to another, with plenty of damage dealt along the way.

It doesnâ€™t matter if youâ€™re playing as the Flash or the hulking Solomon Grundy – fights are fast paced, complete with some suitably crunchy sound effects.

As well as the story mode thereâ€™s a classic battle mode with various difficulty levels to tackle, along with a S.T.A.R lab challenge mode. These challenges vary from one-on-one battles where you can only defeat your foe using certain attacks, to button matching mini-games. Thereâ€™s a fair bit of variety but the fact that some challenges can be beaten in mere seconds does make them feel a little unsatisfying. Still, itâ€™ll take a very long time to achieve three stars on every one. The archive meanwhile holds a wealth of unlockables including different costumes and concept art. Itâ€™s also from here that bonus XP periods can be activated, via using cards gained in battle. 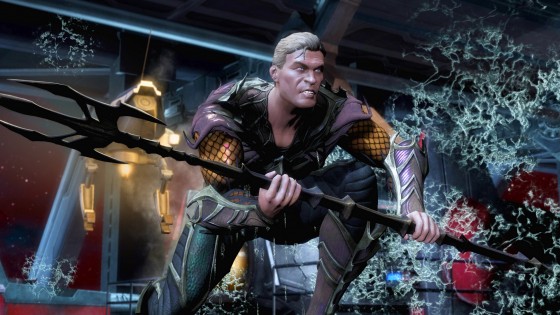 The online mode doesnâ€™t require a pass â€“ a fact that some will no doubt be pleased to hear. As well as player and ranked matches thereâ€™s a KOTH mode in which itâ€™s possible to vote on who will win. Here, matches can be viewed while you wait for your turn to take on the â€˜kingâ€™. Survivor mode has a similar set-up. Because the characters are for the most part well balanced, online brawls are just as enjoyable to watch as they are to play. We did find that the gun toting Deathstroke has a few cheap attacks though. This led to some eye rolling whenever we found ourselves up against players keen to exploit them.

Incidentally, a few characters do have a â€˜fillerâ€™ feel about them. Ares and Black Adam spring to mind here. We arenâ€™t against the idea of relatively unknown characters being used to fill the roster, but at least pick ones that have something unique about them. On the upside, it was the characters that we didn’t expect to gel that with we found ourselves using the most. Neat little animation touches make the likes of Green Arrow, Aquaman and Harley Quinn stand out just as much as Batman and Superman do. Aquaman’s super move in particular is one of the best.

Both fighting game and DC fans alike can rest assured that no injustice has been dealt here. No matter how obscure some of them are, NetherRealmâ€™s love for DCâ€™s characters is more than apparent, and although not quite as nuanced as some Japanese beat â€™em ups itâ€™s still a pleasure to play.