Will Wrightâ€™s original city building sim has been released on almost thirty different formats over the years, but today weâ€™re going to take a look back at just one version in particular â€“ the SNES version from 1991. This isnâ€™t any old SimCity. Itâ€™s Nintendoâ€™s rendition of SimCity.

Part of the SNES launch line-up, alongside such classics as F-Zero and Super Mario World, SimCity was slightly lacking in visual prowess when compared to the aforementioned, but still had all the markings of a classic.

Indeed, this was the game we found ourselves returning to long after Super Mario Worldâ€™s 96 exits had been discovered and becoming the champ of F-Zeroâ€™s notoriously tough King league.

Starting with a barren landscape, Will Wright himself â€“ presented with Lemming-like green hair â€“ helped to guide towards creating a bustling Megalopolis. Right from the off a tricky task was presented â€“ should you build a cheap but polluting coal power station or cough up more for a clean nuclear power plant? Bear in mind here that a nuclear explosion could happen at any time â€“ just one of the many disasters that could occur without warning. That’s providing you didn’t have disasters turned off, as that option was there for those whole simply wanted to build and create. 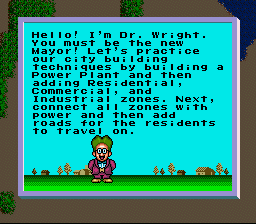 In other versions a Godzilla-alike would randomly appear, but here the massive monster was none other than Bowser. We’re told that he had decided to go on a rampage in your city to try and find Mario and Luigi, which was just one of the few nice little touches Nintendo added. A Mario statue could also be placed much later in the game.

There were plenty of stats and charts for those wanting to see how well their city was doing, but essentially only two things had to be kept an eye on to keep the population happy â€“ crime rate and pollution. Pollution was a tricky one â€“ industrial units provided jobs but pumped out plumes of smoke. If you didnâ€™t build any then demand would go sky high and ratings would drop. Commercial buildings were all well and good, but not everybody wanted to work in retail it would seem as demand was nearly always low. As for entertainment, zoos, theme parks, casinos and stadiums were there for the placing. Casinos did, however, increase the crime rate. 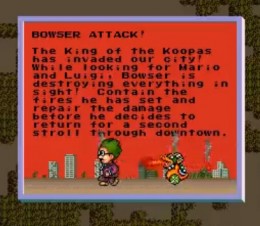 As cities grew in size, so did the amount of traffic â€“ represented here by tiny black marks on the road. The way to resolve this was to build train tracks. Amusingly, no matter how long your track was, just one train chugged around. This was even if the whole map had track instead of roads.

Music was whimsical throughout, changing whenever your population hit a new milestone. When doing so a celebratory screen would appear, with Will Wright jumping and performing other humorous animations. Youâ€™d often get a reward too, such as the chance to build a house for yourself.

Creating a Megalopolis was a daunting task, especially without using the infamous infinite cash cheat. The trick was to make every area high in value, thus allowing buildings to become colossal in size. Once two buildings of the same type reached their highest they would join together to make a tower block as well as what we always assumed were large department stores. There was also the chance to make landfills when land became full, but these were hard to come by.

In typical Nintendo fashion â€“ at least for the time â€“ the manual was entertaining to read, including a look at how some fictitious mayors ran their cities either into the ground or to prosperity. It’s easy get the impression that Nintendo wanted the game to hold some educational value, in the hope that a parent might buy it for their child over something violent. Better this than Mario is Missing, we suppose.

Much later in the SNESâ€™s life, SimCity 2000 was released on the then ageing console. It wasnâ€™t anywhere near as popular as the original, which is more than likely down to arriving very late in the day. The original did so well, in fact, that it was granted a release on the Nintendo Classics range. That’s not bad going for what was arguably one of the SNESâ€™s ugliest looking titles.