Since bagging what remained of Midway in 2009, Warner Bros. hasn’t done a great deal with Midwayâ€™s assets.

They published the Mortal Kombat game NetherRealm were working on at the time, there have been a couple of half-baked retro collections â€“ one for consoles, and one for iOS â€“ and a Spy Hunter game was slipped out on the sly on 3DS and PS Vita. Why did they slip it out? Because it was rather on the shoddy side.

You could argue that the recent Game Party titles are a continuation of a series Midway started, but that wasn’t the Midway we knew and loved. That was Midway fighting for survival.

Today weâ€™re looking at six licenses Warner Bros. should consider reviving next. You can assured that you wonâ€™t find Bio Freaks on our list. 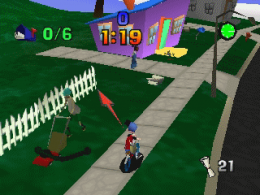 Midway tried to revive Paperboy on N64 with mostly disastrous results. Indeed, itâ€™s a concept that most would consider too simple for a console release. It would however work perfectly as a mobile game, swiping the screen to throw newspapers into peopleâ€™s letter boxes. Glu Mobile had a crack at such a thing in 2010, but thereâ€™s still more potential to be uncovered.

A physics engine could be in place, along with some Peggle-inspired slow-mo as the paper reaches its target. Maybe even a little drum-roll as the paper slides into the letter box after a well-aimed shot. Each route could be rated out of three stars, just like Angry Birdsâ€™ levels, with scores then going up onto a leaderboard.

One thing that gave the original a degree of charm was the obstacles the nameless delivery dude had to avoid â€“ rappers spinning around on their head, people with ghetto blasters and such. This new version could have todayâ€™s equivalent â€“ people playing on their iPhones while not looking where theyâ€™re going, and careless drivers with a coffee in one hand and a mobile phone in the other. Also: idiot children on scooters. 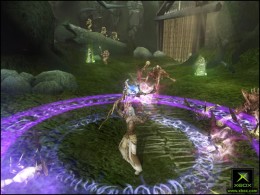 Fantasy co-op hack and slashers are more popular now than never, so a new Gaunlet has to happen sometime.

A Wii U Gaunlet could be something very special, with the ‘dungeon master’ at the helm of the GamePad to draw safe paths to the exit, hand out health potions and point out where the treasure chests are. Online co-op play would be essential seeing that, in our experience at least, getting four friends around can take a hell of a lot of planning. Characters could be customised with loot and any surplus equipment shared between your party.

Every time we review one of Midwayâ€™s arcade collections we find ourselves saying the same thing â€“ â€œSmash TV holds up very well and is one of the collectionâ€™s highlights.â€

This is because itâ€™s true. It remains a brilliant blaster, with much in common still with todayâ€™s top down twin-stick shooters. Swarms of enemies, dozens of weapons and a touch of ultra violence â€“ Smash TV did these three things very well. The bosses too are well remembered, including the human tank Mutoid Man.

To be fair, weâ€™d be happy with an mere remake with online co-op play. One thing we would change though is that instead of VHS players being given away as fictitious prizes, Blu-ray players should feature instead. It’s quite amusing that the developers thought VHS players would still be around in whatever far-flung year Smash TV was set.

Yes, Rampart was made by Atari but even so itâ€™s available on Midway Arcade Origins. Quite how this deal came about we arenâ€™t sure. Itâ€™s a game that wasnâ€™t seen all that long ago â€“ a PSN version was released with online play, but is sadly no longer available.

Part shooter, part puzzler, Rampart would fit nicely into todayâ€™s popular tower defence market. Set in first person, the start of a round could see players deploying large Minecraft-style blocks to build a structure around their base. After a warning bell tolls, the player then has to man cannons for some physics-based destruction against land, air and sea vehicles of which other players have control. Matches could even offer multiple player battles rather than 1-vs-1.

We may have just described a turn-based online version of Wreckateer. That wouldnâ€™t necessarily be a bad thing, mind. 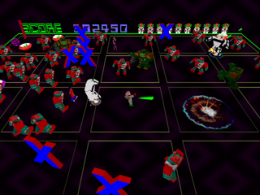 The biggest quandary any developer would face would be how to translate its art-style. Midway had a crack at a new Robotron game in 1996 for PSone and N64, but it ended up looking like a bit of a mess.

A trippy approach would probably be the best bet, similar to Geometry Wars 2 and Space Giraffe.

An Xbox Live Arcade version did exist for a while, with HD graphics and online leaderboards, but was taken down in 2010 following Midwayâ€™s sale. If memory serves, a few of the achievements were right buggers to unlock. 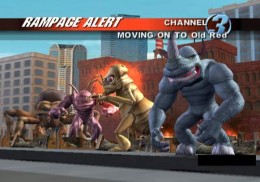 Weâ€™re quite pleased a few games still dare to be silly in a world where realistic first person shooters are the industryâ€™s leading genre. A new Rampage has the chance to be very silly indeed.

Letâ€™s rule out a 2D remake. Midway had a crack at a few of these over the years â€“ even bringing one to the Wiiâ€™s launch line-up â€“ and theyâ€™ve all been on the rubbish side due to being rather limited. Itâ€™s time for a full-blown free-roaming Rampage, similar to Prototype and the last Incredible Hulk tie-in.

George could swing through cities via lampposts while Lizzie causes ranging infernos with flame breath, all the while repelling attacks from the US army. When a city is levelled to the ground, the story then progresses to the next stage. Humorous touches could be in abundance â€“ punch a neon light to gain temporary electric shot powers; swallow a flame thrower trooper and gain the ability to spit out fireballs. Imagine pulling off a body slam from the top of a huge tower block onto the streets below.

A large variety of monsters could help to keep things interesting. Believe it or not, Rampage: Total Destruction had over 30 characters including, rather oddly, a jelly fish.

Like we said â€“ a new Rampage could be very silly, and in the best possible sense of the word.