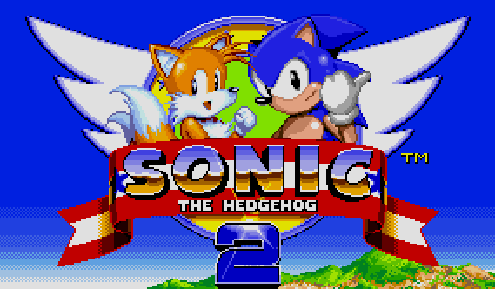 Twenty years ago this week â€“ Tuesday, November 24th 1992 to be exact â€“ Sega released Sonic the Hedgehog 2. Weekday releases are increasingly becoming the norm in the UK, but back in 1992 it was unheard of. Sega’s witty marketing department even went as far as dubbing its Tuesday release as â€œSonic 2â€™s Dayâ€. According to sources on the internet, which are a little flaky we must admit, Sonic 2â€™s launch was the first ever simultaneous worldwide release. 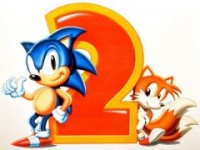 Sonic fans will no doubt proclaim Sonic 3 to be the pinnacle of the blue hogâ€™s 16-bit career, but for many Sonic 2 holds a special place in their hearts. The amount of hype the easily excitable â€˜90s press gave it was beyond compare to any other game – except perhaps Donkey Kong Country â€“ and although the original Sonic started to turn the 16-bit war in Segaâ€™s favour, Sonic 2 helped to seal the deal. It sold over six million copies and brought Segaâ€™s market share up to 50 percent within six months of release.

Letâ€™s go back to the hype train for a bit. A hype train fuelled by a $10 million advertising campaign, no less. In the run up to the gameâ€™s release, Sonic 2 was on the cover of every Sega magazine, and also most of the multi-format magazines such as CVG and Mean Machines. ‘Bigger and better’ was the focus of most previews due to Segaâ€™s promise of a game twice the size of the original and twice as fast, with ‘3D’ bonus stages, a new two-player mode and the introduction of a new character – Miles “Tails” Prower. Back in 1992 we thought that pun was hilarious.

The review scores were outstanding, including 96% from Mean Machines and 94% from CVG. CVG uploaded a scan of their Sonic 2 review earlier this year, as part of one of their magazine look-back features. 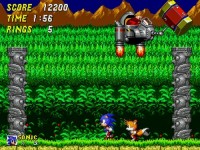 Tails not only followed Sonic, copying the playerâ€™s every move, but a second player could pick up a pad and take control at any time. This proved to be very useful during boss battles â€“ Tails had infinite lives, which was also invaluable because the two-tailed fox would often fall into lava or walk straight into enemies.

A spin-dash move was also introduced. Simply hold â€˜downâ€™ and press any button and Sonic could be â€˜revved upâ€™. Just one or two button pushes were required, but it was entertaining to hammer the button and pretend you were fully charging him up, ready to go whizzing along those colourful 16-bit landscapes. 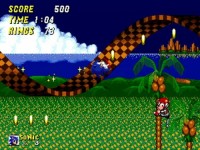 As any good Sonic game should, Sonic 2 started off with lush rolling hills and blue skies. Emerald Hill also featured some corkscrews to run around and a boss battle involving Robotnik in a vehicle with a huge drill on the front. The second level always struck us as an odd choice. In Sonic 1 the levels slowly went from being covered in flora and fauna to more industrial-like zones, but here players were thrown straight into the Chemical Plant Zone, a factory with pink goo rising from the bottom. The rise in difficulty level compared the first level was pretty steep, but then again, Sonic 1â€™s second level (Marble Zone) was also tough due to the flowing lava. 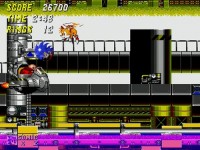 From there things became a whole lot easier. Casino Night Zone provided a welcome change of pace and is still a lot of fun to play though even now, due to being full of bumpers and springs and a boss battle taking place in a giant pinball machine. The following Hill Top, Metropolis and Oil Ocean zones were a little tougher â€“ they had bottomless pits, lava, and enemies with spikes on their heads. The music for Hill Top Zone is lodged in our brain forever. In fact, all of Sonic 2â€™s music was pretty special, especially Metropolis Zone with its vinyl scratching sound-bites. This YouTube video starring Chemical Plant Zoneâ€™s music has had over a million views to date:

Sonic 2 ended with Sonic up in the clouds. Sky Chase Zone was something of a novelty â€“ Tails flew a plane while Sonic wing walked on top. This led to Robotnikâ€™s flying Wing Fortress and the final battle â€“ Robotnik inside a screen-filling mech suit. It was an impressive sight at the time, but not quite as impressive as the bonus stages which saw Sonic and Tails running down twisty tubes, collecting rings and avoiding spike-covered balls.

These bonus stages could be accessed from any checkpoint as long as you were carrying over 50 rings, as opposed to only at the end of a level as in Sonic 1. Because of the longer levels and higher number of checkpoints it was possible to gain all six chaos emeralds well before the half-way mark. Gaining all of these allowed Sonic to transform into Super Sonic â€“ an immortal hedgehog, pretty much.

The bonus stages formed one of the four competitive two-player levels, with the other three being Emerald Hill, Mystic Cavern and Casino Night. The player who finished first won, and a power-up unique to this mode that exchanged playerâ€™s positions made matches incredibly unpredictable. The graphics did look pretty squashed and distorted in two-player split-screen, it must be said. Sonic 3 fixed this by having its own levels and sprites especially designed for multi-player, although the levels were just simple looping races.

Weâ€™ve scolded the 8-bit versions of Sonic 2 many times before, but weâ€™re going to unleash our rage once again. The levels felt like they were in the wrong order, starting with a horrid brown-hued mine cart stage. The hang-gliding section (which was one of the few â€˜big new thingsâ€™) was simply a pain in the backside. Tails wasnâ€™t a playable character either â€“ the plot explained that Sonic was on a quest to rescue him. Another bad thing about 8-bit Sonic 2 was that the first boss â€“ a crab who had to be defeated by avoiding bouncing balls – was close to impossible on the Game Gear due to the handheldâ€™s screen size. Compared to how brilliant the original 8-bit Sonic was, it was a really shoddy sequel.

Think you know everything about Sonic 2? Hereâ€™s one titbit of trivia you may not be aware of from the 8-bit versions: as you can see here on SMS Power, the level title screens used sprites from the Mega Drive version. Weâ€™re curious to know what happened to Tailâ€™s tails in the Sky High Zone image.

So, let us say Happy 20th Birthday to Sonic the Hedgehog 2. It wasnâ€™t a perfect game but blew a lot of adolescent gamers’ minds with its speed, bright colours and bountiful new improvements. For thousands, if not millions of gamers, it helped to make Christmas Day 1992 even more special.