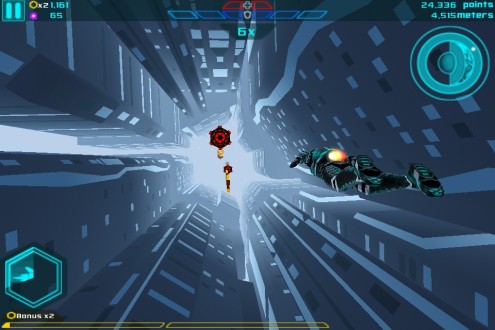 There are at least two things going for Verticus. First, it’s got Stan Lee’s name above it, and that’s going to generate a fair smattering of interest. Second, it’s vaguely reminiscent of that sky dive, which is still reasonably fresh in the collective mind.

I do mean vaguely though: thankfully alien attacks weren’t one of the challenges that Felix Baumgartner had to face. In fact, the similarities only run as far as sky diving in a fancy suit. Forget I said it.

So yes, aliens. For some reason or other The Obliterators want to, well, obliterate the earth, by exploding some sort of elaborate device at the centre of the planet. It’s your job to dive down, grab said device, and get it the heck into space. Along the way there are coins and orbs to grab, pointy bits and aliens to avoid, and a big boss thing to tolerate for a short time before it helpfully gets out of the way.

And once you’ve done all that? Do it again, but with more things in your way – because it’s an endless, high score chaser of a game. Or equally, it’s a money-grabbing exercise, since you can always carry on playing if you’ve got enough orbs – either collected or, yes, bought with actual, factual money.

The same goes for coins, which are used to buy upgrades. Thankfully the essential upgrades – rocket launcher, armour – are easily got without resorting to IAPs. I say resorting because, at Â£1.49 up front, it’s a bit rich to be pumped for yet more pennies.

There’s a nice learning curve to climb before successfully saving the earth for the first time, and it’s good fun to that point. Beyond that, there’s not a lot of reason for repeated playing, since there’s little obvious variation – unless you fancy forking out to keep going for high scores.

The controls, too, don’t do much to tempt you to keep playing. They’re serviceable, but there’s no weight to them, and the depth perception isn’t quite right, so playing isn’t particularly satisfying in and of itself. Go back to AaaaaAAaaaAAAaaAAAAaAAAAA!!! to see how to do weighty, fun, imaginative falling.