If somebody had told me back in the early 90s that in twenty years time it would be possible to buy a colour handheld with twenty 8-bit Sega games built in and it would cost under Â£10 to buy, I would have probably jammed Lego bricks into their eyes and called them a witch. But, lo and behold, here it is. 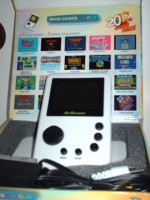 Or rather, it was here – this gizmo was available at Argos for a while but it now appears that theyâ€™ve stopped selling them. Itâ€™s a shame the collection of games is quite good and build quality is pretty robust as well. The screen is bright and colourful, although a little pixilated, and it has a backlight. When the sound is down low itâ€™s muffled and distorted; turn it up though and itâ€™s loud and much clearer. The box has a velcro flap on the front and a foam insert to hold the handheld snugly – itâ€™s the type of box youâ€™d expect a moderately priced watch or a new mobile phone to come in. You can also connect it to a TV via a cable kindly included in the box.

Clearly marketed to jump on the Nintendo DS fueled brain training bandwagon, the Brain Games Color (yes, thatâ€™s really what itâ€™s called) features an assortment of 17 Master System and GameGear games plus three rather rubbish new games – Hangman, Sudoku and Warehouse Keeper. Amusingly, text in Sudoku is entirely in Brazilian, including the menus and instructions. Pause the game and the word â€˜Pausaâ€™ appears on the screen. Hangman has a massive design fault – the words always appear in alphabetical order, so every time you start a new game the first word always starts with â€˜Aâ€™ and so on.

Fortunately the rest of the games are an interesting bunch. Thereâ€™s not one but three Alex Kidd games. Alex Kidd in The Lost Stars is a pretty basic and crude platformer with chunky visuals. Alex Kidd in High Tech World is a lot slower paced and complicated, playing almost like an adventure game while Alex Kidd in Miracle World is the pinnacle of Alexâ€™s career. Another decent platformer included is Psycho Fox. Itâ€™s harder than frozen concrete but rather endearing with a jolly musical score.

Columns, Super Columns, Dr. Robotnicâ€™s Mean Bean Machine (aka Puyo Puyo) and Baku Baku Animal will please fans of falling block puzzles. Sonic Drift 2 is an something of a curio – the GameGear version of this still sells for quite a bit on eBay, despite not being all that great. The same goes for Sonic Spinball, which contains the most ear-offending music imaginable. Dragon Crystal and Penguin Land havenâ€™t aged that well; the presentation on Sega Chess is still quite impressive though and itâ€™s nice to see Snail Maze present. For those not in the know, Snail Maze was a game hidden deep inside the original Sega Master Systemâ€™s circuit boards. You had to hold down certain buttons while powering it on to get it to appear.

When booting up Fantasy Zone: The Maze I expected a 2D shooter, but instead it plays more like Pac-Man. The original Fantasy Zone is here too though.

Brain Games Color might not be commonplace on store shelves any more, but you might have luck finding one on eBay or Amazon Marketplace. Or maybe in the bins round the back of your local Argos store.