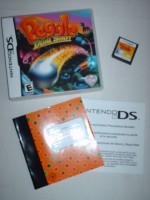 I was starting to give up on Peggle: Dual Shot getting a European release so I turned to the murky waters of eBay to find a copy. A new copy for sale at Â£9.99 on Buy It Now seemed like a very reasonable purchase, although I was sceptical – the seller was based in Hong Kong, where piracy is rife. I bet they even pirate pirate games over there.

One week later I was presented with one bootleg copy of Peggle. Whatâ€™s amazing though is that itâ€™s an incredibly good copy – the manual is full colour and it even includes a Nintendo Health & Safety booklet. Pirates with a conscience? Could be. The only two things that give it away are the slightly iffy printing on the inlay and the fact that itâ€™s a US game but it comes in the chunkier European-style case.

Pirated GameBoy Advance games could be spotted a mile off – Nintendo would often be misspelled on the cartridge (usually as Niintendo or Nintondo) and people who unknowingly brought them from places like eBay sometimes received their game with the box still flat packed. I also heard of games not having batteries inside to save progress, thus making the likes of Zelda: Minish Cap and Pokemon almost unplayable.

The Peggle cartridge itself works perfectly. Reviewing a pirate game seems a bit wrong (I can foretell a â€˜GamesAsylum uses pirate games for their reviewsâ€™ backlash) but in short: itâ€™s just as good as the Xbox 360 version. The level design, sound effects and music are identical and a trial game can be beamed over to another DS. To make up for a lack of online play thereâ€™s a dual mode where you get to play against the computer and once you finish the adventure mode Peggle Nights becomes unlocked.

If you fancy a copy though then of course use a reputable US retailer so that developers PopCap get their share of the cash.