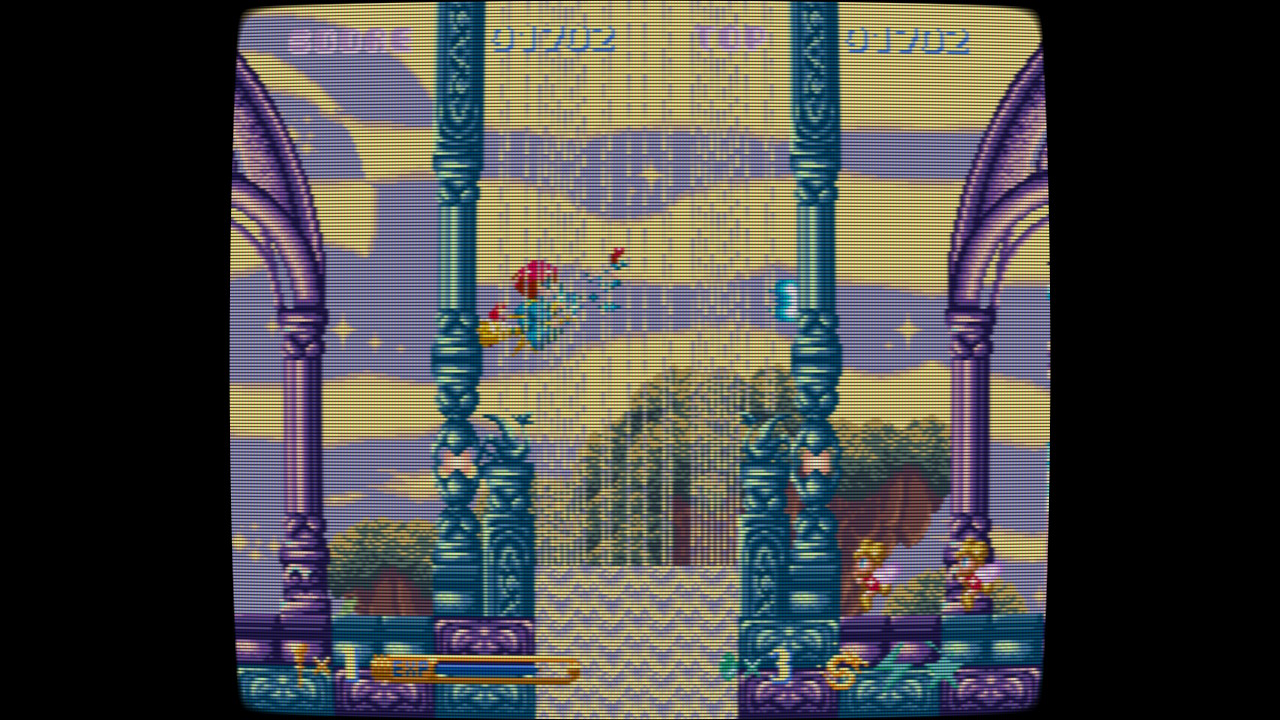 In our Panorama Cotton review we mentioned that the Cotton series was, historically, rarely afraid of reinvention. Cue an emphasis on the word “rarely” because there was one exception: Cotton 100% on Super Famicom, which has recently been re-released on PS4 and Nintendo Switch.

Cotton 100% is very much a reimagining of the original Cotton arcade game, instead designed around the strengths and peculiarities of the Super Famicom hardware. By revisiting the tried and tested, the game is almost a polar opposite to the genre-switching Panorama Cotton that also released in the same year. Maybe series creator Success didn’t want to put all its eggs in one basket given the radical departure Panorama Cotton represented.

An emphasis on revisiting the familiar isn’t inherently bad – it just puts it in direct comparison with its predecessor. And yet Cotton 100% actually changes a fair bit with its reimagining, but in doing so it also happens to be a more inconsistent game.

As in the original Cotton, this is a side-scrolling shooter starring a broomstick-riding witch who loves devouring fluffy willows, complete with a retelling of the story. However, plenty of attempts have been made to mix things up thematically, with Cotton 100%’s new levels eschewing the gothic environments from the original in favour of a magical fairyland world that plays host to new and redesigned foes.

The power-up Crystals – a major component of Cotton’s DNA – now rotate between just two fixed colours when shot, yellow for shot power and red for magic. On top of this, shooting crystals for too long causes them to disintegrate, forcing extra precision.

On its default Normal difficulty setting the first couple of stages of Cotton 100% are disappointingly pedestrian. Enemies are laughably unthreatening, bosses are dispatched with a single press of the magic button, and even the end-of-level tea time sequences, where you have to dash around collecting tea, are devoid of challenge. You’re left waiting for the real game to begin.

Then something unexpected happens: Cotton 100% picks itself up and gets moving. The same enemies you saw earlier return but with new attacks – even the once-harmless flowers that jumped about on the spot become a menace. Cotton is now thrust in front of uncomfortable formations of enemies – like an abundance of archers in the woods of stage 4, the cramped confines of a volcano in stage 5, or fighting against currents underwater in stage 6.

Boss fights also force you to act quickly and precisely, even if they can, awkwardly, still be dispatched using a couple of fire magic spells. But magic isn’t easy to come by in a single credit’s playthrough, and you miss out on a magic bonus for using them without restraint. If you’re playing for score you can’t afford to rely on these cheap tactics.

There’s a reason we mentioned the default difficulty setting earlier, and that’s because the game gets going much faster when set to its Hard and Mania difficulties. Common enemies reveal their true forms from the get-go, attacking viciously and appearing in greater numbers. They also take more shots to defeat, forcing you to seriously engage in yellow Crystal collecting to power up faster.

Hard mode, then, is probably the best balance in overall challenge, while Mania over-corrects those first two dull stages in Normal while asking only masochists to apply from stage 3 onwards.

Despite some poor first impressions on Normal difficulty, it’s hard not to be impressed by the beautiful environments and enemies, both of which make effective use of the Super Famicom’s expanded colour palette. The final stage, for instance, features impressive mirror reflections that add a pleasing amount of depth to an otherwise slowly scrolling two-dimensional area.

As with Gleylancer and Panorama Cotton, Cotton 100% has been ported by Ratalaika Games, with similar options and settings between it and previous releases. The inclusion of several CRT picture shaders is appreciated, effectively bringing out extra detail from the sprite work. Control responsiveness, while degraded due to emulation, is kept at a playable level.

One element of the presentation is awry, however, and it’s the aspect ratio setting. Despite changing between the various options the game was always displaying at a square aspect ratio. Many of the sprites in Cotton 100% were designed to be stretched out into the 4:3 aspect ratio that was standard across television sets of the mid-90s when the game was released, and those sprites appear compressed here. Hopefully this bug will be patched.

While Cotton 100% doesn’t have the pizazz of Panorama Cotton’s sprite scaling magic, or the enemy hurling combos of Cotton 2, it does what it sets out to do well as an unfamiliar remix of the Cotton. It is also, ironically, truer mechanically to that original game than the new mode appearing in Cotton Reboot. If you’re looking for more Cotton in the style of the first game and don’t mind an inconsistent challenge Cotton 100% should have you covered – just perhaps not to the same degree its name suggests.

Cotton 100% is published by ININ Games. Available now on PS4 and Switch.