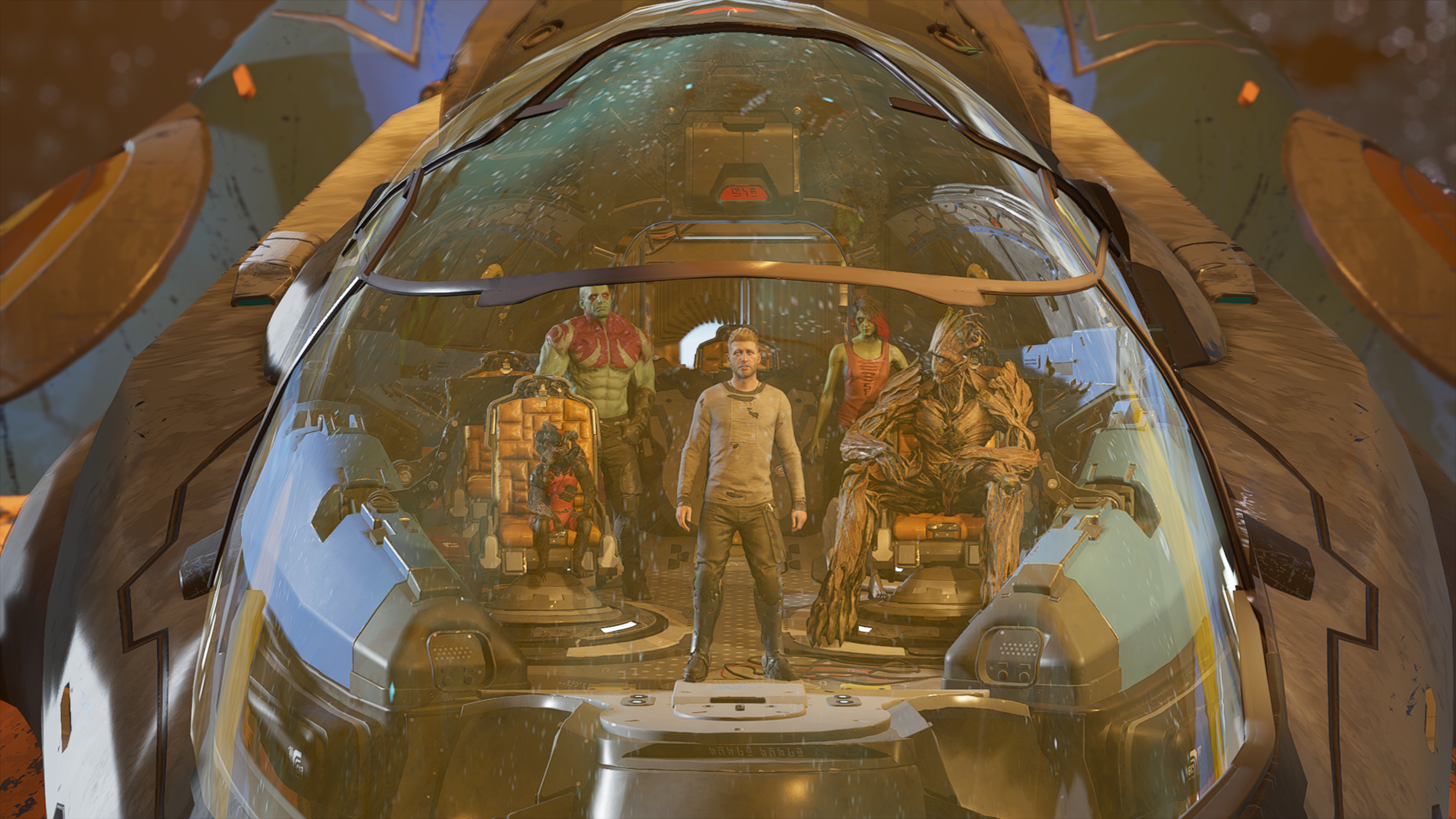 After giving us their take on Tomb Raider in 2018, with Crystal Dynamics stepping down to a support role, Eidos-Montréal was tasked with creating a much sought-after single-player Marvel game – a supposed companion piece to the ‘live service’ Marvel’s Avengers.

Guardians of the Galaxy begins in the best possible way – with a mighty dollop of ‘80s nostalgia. Various licensed properties are strewn around a dingy bedroom belonging to a pubescent Peter Quill, most of which can be interacted with. In a surprise twist, not all are Disney properties either.

We dare say there’s a degree of showboating going on, with Quill’s possessions bearing intricate detail. This sets the bar for what’s to come – you’ll often find yourself slowly panning the camera around to take in the extra level of detail woven into each environment. Coupled with each alien world having marked viewpoints, this is less of a shooter and more of a deep space sightseeing tour.

You play as Peter Quill, aka the not-yet-notorious Star-Lord. After a faux pas during a get-rich-quick-scheme, Quill and his ragtag bunch find themselves at the mercy of a zealous cult threatening the galaxy. The stakes are high, and they’ll need some backup. This setup allows for a brief grace period before the main threat is introduced, as well as introducing lesser-known characters from the Marvel archive.

If it wasn’t for the surprisingly lengthy runtime of 16-18 hours, you could almost swear you’re playing through a Marvel film. There are highs and lows, plenty of fooling around, and every character ends up a better person by overcoming their struggles.

Like Marvel’s (Square-Enix’s) Avengers, character designs have been altered slightly to create a distance from the MCU. Eidos-Montréal has managed to outdo Crystal Dynamics here, giving us characters that retain their distinct personalities, while being softer in appearance. Groot is the exception, being more menacing in stature. It doesn’t take long to warm to Quill at all, mostly thanks to his ability to put his ego aside.

Conversations between characters are seemingly never-ending – from start to finish, somebody always has something to say, whether it’s a wry observation from Gamora – the voice of reason – or snark from Rocket. Drax continues to misunderstand Quill’s idioms, much to our delight. It’s a sharp script where very few one-liners fail to land.

Conversations rely on multiple-choice responses, some of which have consequences. This invites a comparison with the Mass Effect series. It also gives scope for replay value, with one early mission giving an important choice to make, changing the course for the rest of the chapter. One scene even recalled Mass Effect 2’s memorable suicide run, with all of Quill’s chickens coming home to roost – to use a phrase Drax would doubtlessly misinterpret.

Most chapters, as unpredictable as they are, see the group return to the Milano to plan their next move. It’s possible to forge upgrades here and talk to each character one-on-one – with collectables acting as conversation starters. Slower sections can be taken at your own pace, with most participation optional. These ‘Milano breaks’ help make for an experience far less gung-ho than anticipated.

Quill can command his ragtag bunch both inside and outside of combat. Traversal plays a big part, and like Lara Croft before him, Quill must shimmy along ledges, leap across gaps, and butt slide his way to visor-marked waypoints, with hidden collectables off the beaten path. While navigating colourful alien worlds, occasionally stopping to battle the vicious wildlife, the team often hits a dead end where the expedition comes to a standstill. Here lie puzzles of sorts. Drax can be ordered to shift large objects, and Rocket sent into small gaps to scout ahead. Gamora, meanwhile, can thrust Quill to higher realms and chop through vines.

Quill has his own skills for finding a path ahead, in the form of four elemental upgrades doled out periodically. These can also be used in battle to drain shields and freeze enemies, helping to prevent tedium from settling.

Combat initially has an arena-style set-up before branching into more linear, corridor-filled, territory. Quill is spritely on his feet, able to move around the battlefield briskly, accompanied by a degree of acrobatic flair. The LB button is used to issue commands, and you’ll soon discover how largely teamwork plays. Groot can trap enemies with roots, Gamora can deliver swift killing blows to single foes, Drax can throw large objects and shoulder barge, while Rocket can harm large crowds with explosives. You’re kept on your toes with barrages of projectiles and large numbers of enemies, including mystical priests able to heal their cohorts.

While not particularly tactical, combat is a lot of fun, and plenty of opportunities arise to deal significant damage with a single well-timed attack. The only odd occurrence is that characters will ‘warp’ to where they’re needed after being given a command. This was presumably to keep the pace fast-flowing and help with the sense of urgency – the team becomes very energic and excitable the moment enemies arrive on the scene.

More damaging are the few glitches present – we experienced a button input lingering on screen until the next cut-scene appeared, and we also had to reload a checkpoint as Rocket failed to automatically open an electronic door. A few elements come across as padding too, such as the fixation on scanning the environment with Star-Lord’s visor, and the comical ‘huddle’ scenes which momentarily bring battles to a standstill.

Eidos-Montréal could have easily taken a cookie-cutter approach, giving us a 10-12 hour generic cover-based shooter with a light sprinkling of comic book lore. There’s even a [spoiler] fake credit roll at around the 10-hour mark, suggesting the developers knew what our expectations were. Marvel’s (Eidos-Monreal’s) Guardians of the Galaxy gallantly goes beyond the call of duty, delivering something that exceeds expectation.

There’s a deep understanding, and appreciation, for what makes GotG – as a franchise – work. Improvised plans, plenty of surprises, themes of trust, friendship and family. Licensed music isn’t phoned-in either but used sparingly and shrewdly – with one instance having great comical effect.

Square-Enix hatched a plan, and that was to give Eidos-Montreal one of the more demanding Marvel licenses, plus the time and resources required to forge a visual and emotional tour de force. There’s a little bit of improvisation to get the job done, but it wouldn’t be an authentic Guardians of the Galaxy experience without. Even Peter Quill himself would be proud.

Marvel’s Guardians of the Galaxy is out now on PS4, PS5, Xbox One, Xbox Series and PC. A Switch cloud version is also available.

SCORE
8
Marvel’s The Guardians of the Galaxy