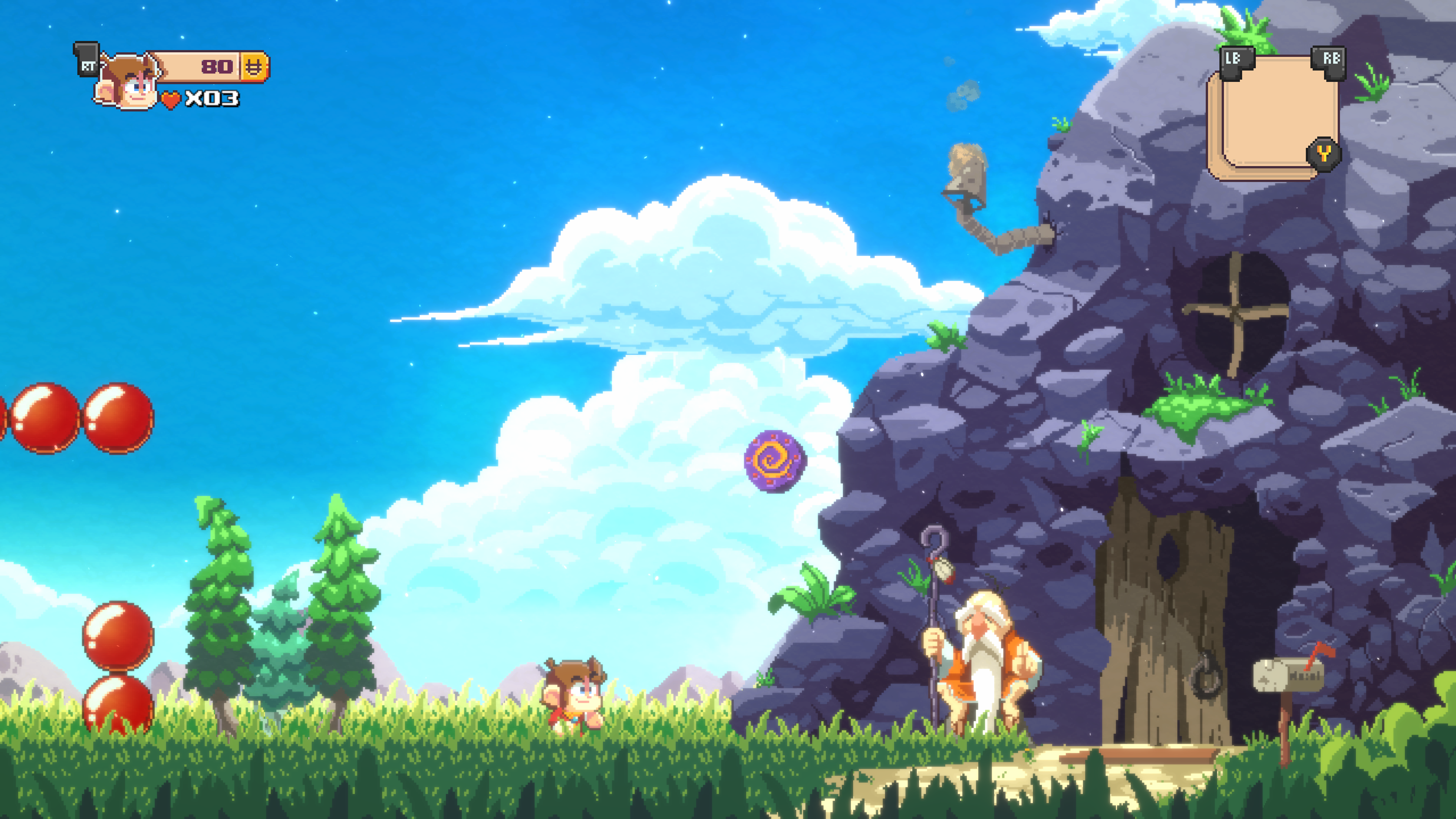 Presumably due to the amount of work involved, developers are extremely choosey when it comes to remastering 8-bit games. On the rare occasions when an ‘80s title is plucked from the halls of gaming history and given a modern makeover, they do at least tend to choose the cream of the crop, including such celebrated classics as Duck Tales and Wonder Boy: The Dragon’s Trap.

Alex Kidd in Miracle World is a more than worthy candidate too, being one of the most popular Master System games. It was built into the redesigned Master System II, meaning it was owned by the majority.

New developer JankenTeam has effectively tried to capture the same magic that made the Wonder Boy: The Dragon’s Trap remaster a success, building a new experience on the foundation of the original. It now sports modern visuals and new stages, along with such additions as backstory expanding NPCs to converse with, and extra collectables.

It’s possible to switch to the 8-bit original at any time, and ingeniously, that new content has been weaved into the original. Because of this, it isn’t a 100% faithfully emulated iteration, but rather a recreation thereof – the sound effects are wobbly, and within the Xbox One version at least, there are peculiar graphical glitches.

Sticking with the new visuals, Miracle World DX is wholly enchanting to begin with. This modern take is vibrant and appealing, with Alex being more expressive and spritelier. Backdrops are rich and detailed (we had completely forgotten the original had simple solid colour backgrounds), the lighting effects are pleasingly subtle, and Alex’s projectile attacks have been made punchier. Speaking of which, Alex now punches with alternating fists – a neat touch – and the music has a fresh Mediterranean vibe, slow guitar riffs included.

Cracks soon appear under the polished exterior, however, and everything starts to crumble. As per the original, the difficulty level rises during the forest stage. This is the first to focus on pixel-perfect jumping, tasking players to leap from single blocks while avoiding spike pits. Here, it quickly becomes apparent something isn’t right with Alex’s movement – dropping down from a block to another below is impossible as Alex falls with a slanted descent. A minor grumble, maybe, but bear in mind that extra lives are rare and that Miracle World uses an antiqued one-hit death system.

During another instance, we simply wanted Alex to face a different direction while perched on a block, but even the slightest tap of the d-pad or analogue stick caused him to fall off. This eventually led us to constantly switching between the retro and modern graphics as Alex seems to be more responsive in his 8-bit carnation. But even then, we noticed that he performs a small shuffle when landing; just enough to make the trickier moments even more maddening.

Perhaps we should just be grateful that we no longer have to get off the sofa and hit the console’s pause button to access the inventory, eh?

Joking aside, we came to Miracle World expecting the retro filter to be a luxury, but it ended up being a necessity during the game’s tricker second half with its focus on precision platforming. We have no qualms in admitting that we ended up opting for infinite lives around the halfway mark. Alex Kidd has always felt a touch slippery to control, and those problems have only been elevated here. When the ending credits rolled, after around three hours of play, we breathed a sigh of relief.

There are issues with pacing too. A couple of the new stages are a breeze, failing to add anything noteworthy or significant, and some can even be beaten in less than two minutes. The improvements to the boss battles are more welcome, throwing a few surprise twists into the mix that’ll certainly catch veteran players off guard. The rock, paper, scissors battles remain an acquired taste, which was always a given. Pre-boss battle dialogue also has typos (“You will have to get passed me first!”) but in the grand scheme of things, this is the easiest of issues to overlook.

It’s clear from the polished visual makeover and slick presentation that JankenTeam had the best intentions, but it seems they have bitten off more than they can chew. Once the visual lustre wears off, its problems begin to amount to an experience that’s more frustrating than fun. Ideally, a new Alex Kidd adventure that wasn’t tied to the foibles of the original would have been a better place to start.

I sincerely hope JankenTeam can cross paths with Alex Kidd again. The team has talent; it just seems their graft and expertise has been applied to the wrong areas.

Alex Kidd in Miracle World DX is out now on PS5, PS4, Xbox One, Switch and PC.