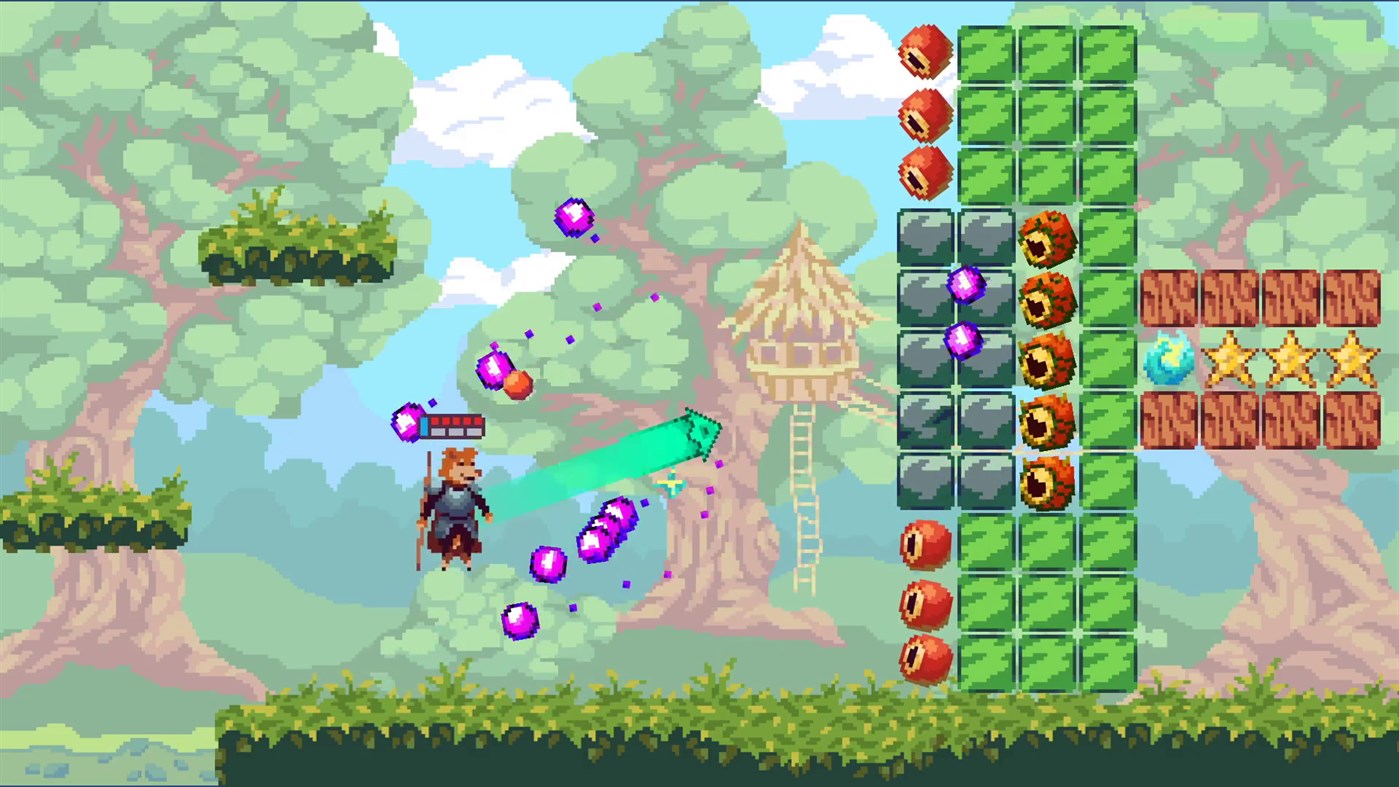 Some ideas are so remarkably obvious they leave you wondering why nobody has thought of them before. Arkan: the dog adventurer fuses arcade-style brick breaking, as seen in Breakout and Arkanoid, with traditional platforming. Our bipedal canine hero is able to double jump around the single screen arenas while returning the ball with his staff, cautiously teleporting out of harm’s way.

Bullet hell elements feature too. The enemies spew projectiles relentlessly, making it impossible to stay in one place for more than a few seconds. Together with the classic platformer trope of bottomless pits, this combination of jumping, projectile avoidance, and carefullyaiming brick-breaking shots makes for a demanding experience. Taking your eyes off the screen for just a few seconds often results in Arkan losing health.

The teleport feature, meanwhile, allows for some daring leaps and last second saves. Over time, more nuances come to light – there’s no penalty for missing the ball on return, meaning sometimes you’re better off letting it bounce off-screen so you can start afresh with a new serve.

In addition to a lack of camera panning – which would have allowed for larger levels – the omission of a dedicated jump button is likewise a peculiar decision. Just like playing an Amiga platform game with a joystick, ‘up’ is used to jump, which results in some fumbling early on. If an update is ever planned, custom control layouts would make for a more instantly accessible experiance.

It’s structured in a similar fashion to a mobile game, with each stage having three stars to obtain. Over the course of the adventure three different worlds are visited, each with their own hazards. While the pastel-hued pixel art is nicely drawn, and Arkan himself has some spritely animation, there isn’t much variety between backdrops. But in light of the £4 price tag, this is excusable.

The inexpensive asking price makes Arkan: the dog adventurer (that’s the developer’s use of a lowercase subtitle, not ours) a decent budget buy. No, you won’t still be playing it a week after purchasing. You will, however, have a good time while it lasts. Fans of Zuma, Peggle and other earlier PopCap games would do well to seek it out, as the similarities are more than few.

Arkan: the dog adventurer is out 30th June on PS4, Xbox One, and Switch. It first launched on PC.