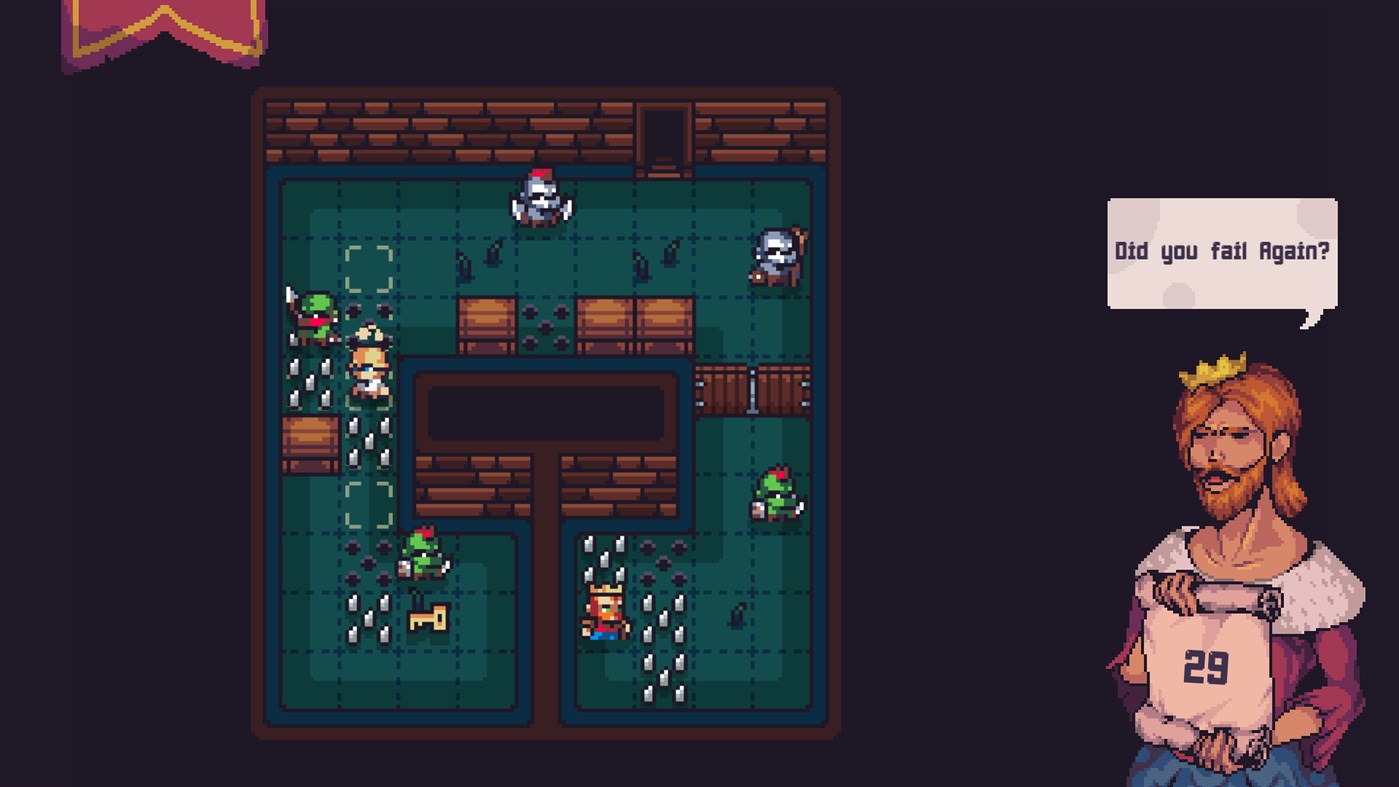 Imagine you’re the ruler of a fancy realm. The citizens are great, and the land is lush and fertile, but there’s a bit of a creature problem. The beasties have managed to sneak into the castle and steal your hairiest (read: bearded!) daughter. Alas, you’ve sent all your worthy heroes on quests to slay dragons to rescue your other non-bearded daughters. The only hero left is the one with a barstool for a weapon and a spittoon helmet dribbling spittle down his mutton chops.

Such a pitiful creature is surely no match against millions of bombs falling from the ceiling. Oh and a few skeletons and other creatures of the dark lands.

Sounds like a fair fight to you? Off you go, then. We’ll see you when you get back.

Hear the fool (that’s you) scream with fury as he is dropped into his first room and has to reach the princess within in a certain number of moves to rescue her. A most frustrating feat when you’re just two squares away and unceremoniously exploded for your failure. Two pages of exposition give some context for why you’re chasing ‘Princess Beardy’ through 50 rage inducing levels, but no clear instructions for the player. This is a design choice, and a devilish one at that.

Our hopeless hero moves one tile at a time, and this counts as a turn. On each turn, various things move along with you. If you get your feet chewed up with spikes or hit an enemy, it will cause you to lose turns. “Oh no!” you yell. The bombs are but a single move away and you’re still nowhere near the whiskered beauty. BOOM! She taunts your uselessness as you become a pile of ash and bone.

You reset the level. Such a persistent idiot.

It’s entirely up to you to figure out the path to the princess. You might have boxes blocking the way or a bunch of enemies fall in line with to destroy with bombs, which have a detonation period you must factor into your already limited number of moves. You don’t want to be caught in the blast and be scolded by princess fuzz-face.

Being the kind and hopeless idiot that I am though, I persevere on. Some kind of wizardry happens that I don’t fully understand, which appears to be an intentional glitch and captain dribbly is suddenly absconding from his rules and freely overshooting his move limit. The princess is pleased but she keeps running deeper into the bloody dungeon, not out the way we came.

Dungeons become more difficult the further you progress, and progress will be slow if don’t like limits being imposed on your play style. Or fully understand the rules. Very rarely did I ever complete a level on the first go, and at some points, I even had to look up help because this type of game is not usually my cup of tea and I have difficulty thinking in terms of space and numbers. But, each level doles out a generous 20G achievement when beaten, and it’s hard to grumble about that.

Dungeons & Bombs is a fun fantasy crossover of Bomberman and Sokoban – the infamous Japanese warehouse game – with a handsomely low price tag. It’ll please pixel art loving puzzle fans, save perhaps for those with explosive personalities. Maybe it should come with some sort of disclaimer?

Dungeons & Bombs is published by Sometimes You and developed by PigeonDev. Available on 26th Feb on PS4, PS5, Xbox One and Switch.