The Devilâ€™s casino sounds like a place only the naÃ¯ve or incredibly foolish would stroll into. Cuphead and his porcelain pal Mug Man donâ€™t come across as either, so we can only assume on the day they played dice with the Devil they were filled to the brim with something far stronger than coffee.

Suffice to say the odds werenâ€™t in their favour, and now unless they can claim the souls of numerous ne’er-do-wells on the Devilâ€™s wish list, a grave consequence awaits. What then ensues is a series of boss fights, run â€˜n gun platforming stages and aerial combat battles, all rendered in 1930s-o-vision.

You only need to look at screenshots to understand that Cuphead is a thing of beauty. The 1930â€™s cartoon aesthetic has been hand-crafted with an incredible eye for detail, resulting in one of this generationâ€™s most visually striking titles. 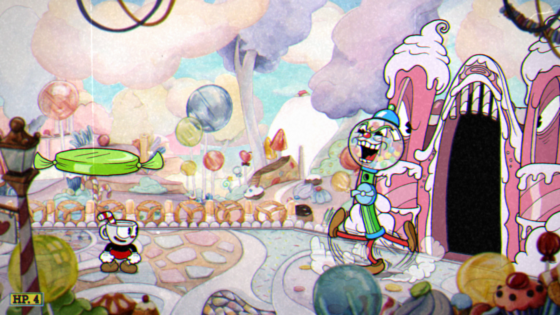 Seeing it in action is only half the story, however. To really appreciate the effort Studio MDHR has poured into this passion project, you need to experience a boss battle for yourself. The animation loops and attack patterns work in tandem perfectly, with frequent visual prompts to forewarn of incoming attacks. Moreover, bosses donâ€™t merely stand on one spot while firing their perfectly timed projectiles. They have numerous waves – some of which can turn a battle completely on its head (so to speak) – and can call in reinforcements. A good example here is Baroness Von Bon Bon, who summons various candy-based critters in a randomised order.

The whole experience boils down to learning from past failures until finally dealing a long-awaited final blow. Bosses initially seem impossible but given time, youâ€™ll learn how to survive long enough to finally tick another soul contract off the Devilâ€™s list. Itâ€™s perfectly acceptable to select â€˜retryâ€™ after taking a hit just moments into a battle; some final waves are so tough that youâ€™ll need an almost full health bar to prevail.

Cuphead can withstand just three hits before kicking the bucket, with a fourth health point available as a perk at the cost of reduced firepower. Coupled with a choice of switchable weapons â€“ all of which can be in your possession by the halfway mark â€“ thereâ€™s a lot of scope for experimentation. 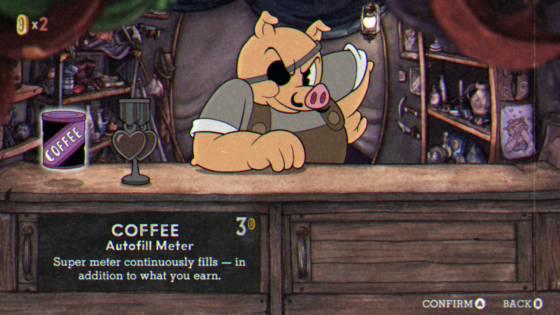 In theory the homing weapon should make things far easier, but because of its low damage, it puts you in the risky position of avoiding harm for longer while it works its magic. It takes time to discover which strategies work, as only after snuffing it are you shown the amount of progress made. For a seemingly throwaway idea, it adds a lot to the experience. Itâ€™s common to progress through a battle further than initially thought, giving the (sometimes false) impression that a soul contract is within tangible reach.

Cupheadâ€™s world â€“ viewed from a top-down perspective – is spread across three isles. The first has a nature theme, pitting Cuphead against fowl flora and fauna, while the second is set inside a ramshackle theme park. The third isle is by far the largest, being a bustling coastal town with a junkyard, theatre, and a handful of nautical-themed fights.

Spending a spot of downtime on Inkwell Isle is pleasing. There are NPCs to talk to, an optional hide and seek quest to partake, and the chance to find a handful of hidden coins. These coins can be spent on weapons and charms at Porkrind’s shop, along with any gained during the platforming stages. With just five coins available per stage, and some items costing as much, itâ€™s wise to mull over potential purchases. If youâ€™re struggling with a certain element, such as the parry slap attacks, Porkrind may have a perk-bestowing item to simplify things. 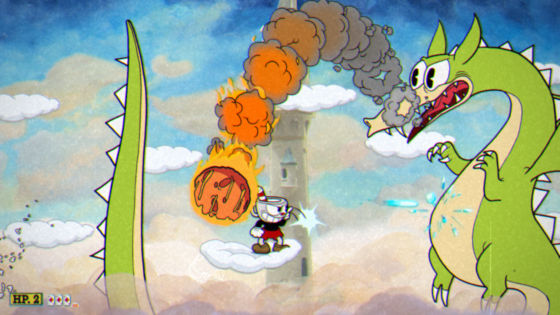 The run â€˜n gun platforming stages have a whiff of Treasureâ€™s seminal Gunstar Heroes about them as parry slap attacks, dash jumps and frequent weapon changes come into their own here. And as you may have already guessed, there are no checkpoints whatsoever. Later stages, in particular, call for perfectly timed parry slaps to progress past certain obstacles; a skill that once mastered becomes invaluable.

Generally, a platforming stage will begin with a series of obstacles to avoid. Although youâ€™re instructed to â€˜Run and Gunâ€™ often doing so leads to an early grave due to the presence of enemies that spew bullets when hit. While some stages are guilty of recycling enemies heavily, they still have the odd surprise or two in the form of mini-boss style characters.

At first, the aerial combat stages feel like a pleasant diversion, with the first isle featuring just one. By the time the Devilâ€™s casino is in reach though, theyâ€™re commonplace. The presence of a gimmick â€“ the ability to shrink, at the cost of reduced spread â€“ adds a welcome twist, making these stages once again reminiscent of Treasureâ€™s works. Cuphead can also fire Bullet Bill style missiles that can cause a lot of damage if fired with perfect timing.

Choosing to save up special attacks or use them as soon as theyâ€™re available gives scope for further experimentation. If a certain wave is giving you hassle, a super attack can quickly bring it to an end. 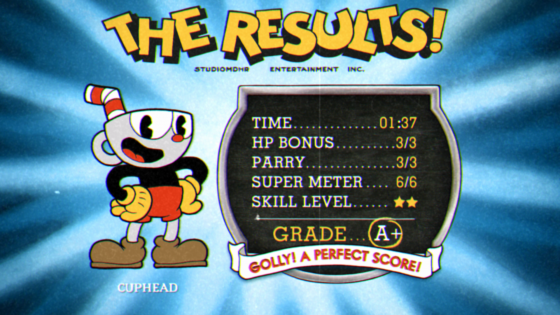 With some battles tougher than others, the ability to try your luck elsewhere shouldnâ€™t be overlooked. An isle usually has at least three unlocked battles, with the rest only accessible after a soul contract has been claimed. The fact that the third isleâ€™s shop is inaccessible at first is a bit annoying, prompting a jaunt back to isle two. Incidentally, returning to already beaten battles to better your score is vastly rewarding, showing how your skills have progressed since the start.

If there is a fault with Cuphead, itâ€™s that itâ€™s utterly relentless. While you may get lucky now and then and â€˜wingâ€™ a few waves, generally each battle takes at least an hourâ€™s worth of attempts to beat. As such, a degree of commitment is required â€“ this isnâ€™t something that can be dipped in and out of, or played for a mere 20 minutes at a time. Your reward for your time and effort? A sense of satisfaction rarely felt these days. And youâ€™ll be one step closer to facing the Devil, an entity that will test the mettle of even those weaned on the likes of Contra III and Super Ghouls â€˜n Ghosts.

Cuphead may not always present the most inviting of set-ups â€“ the third isle certainly took its toll on us towards the end – but ultimately, youâ€™ll be proud to scribble â€˜Completed Cupheadâ€™ on your gaming CV.