Uncharted: The Lost Legacy is the UKâ€™s number one for the second week running. With the almighty Destiny 2 launching on Wednesday, itâ€™s unlikely to make it for a third consecutive week.

The Ubisoft-published Mario + Rabbids Kingdom Battle barges in at #2. Chart-Track reports the difference in sales between Kingdom Battle and The Lost Legacy was narrow.

We can only speculate figures (actual sales totals arenâ€™t provided), but weâ€™d guess by a few hundred copies, or thereabouts. 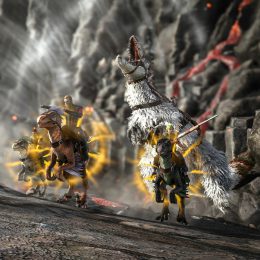 The evergreen GTA V drops once place to #4, and then at #5 itâ€™s good old Crash Bandicoot.

Positions #6 through to #8 are held by fresh faces. Everybodyâ€™s Golf takes #6, ARK: Survival Evolved enters at #7 â€“ with the Xbox One version being the biggest selling â€“ while SEGAâ€™s PS2 remake Yakuza Kiwami shows up at #8.

Madden NFL 18, Rainbow 6: Siege, Fallout 4 and Dishonored 2 all leave the top ten, meanwhile. Also spare a thought for Deep Silverâ€™s Agents of Mayhem, which tumbles to #29.

Dead Alliance from Maximum Games and Capcom’s Resident Evil Revelations HD managed to make top 40 appearances too, albeit at a lowly #39 and #40 (respectively).