The save icon in this incredibly belated console conversion is a 3.5â€ floppy disk. Nothing odd about that you may think, but consider this: Industry Giant 2 is a game so old that when it was first released in 2002, PCs still came with floppy drives. That save icon isnâ€™t for nostalgia purposes â€“ itâ€™s likely some gamers did actually keep save files on a disk. Weâ€™re in deep retro gaming territory here.

After acknowledging demand for this golden oldie on the likes of Steam, German publisher UIG acquired the rights from defunct studio JoWood. Now Xbox One and PS4 owners can take a trip back to 2002, presumably because thereâ€™s belief thereâ€™s demand here too due to UIGâ€™s farming simulators gaining traction on console. Thereâ€™s a whiff of â€˜testing the waterâ€™ about it though â€“ it has an eyebrow-raising Â£31.99 price tag ($49.99 in the US). Current Steam price? Â£6.99. Ouch. 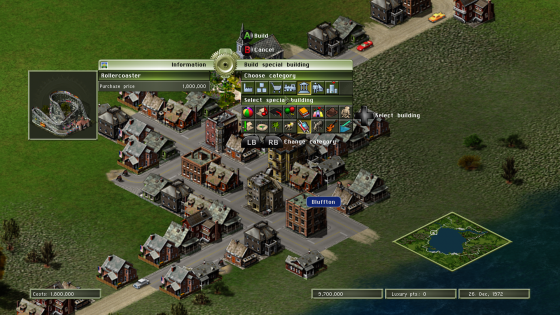 Moreover, this isnâ€™t the HD remake PC gamers received in September â€“ itâ€™s the 2002 original, in all its low-res glory. From what we can tell, there are no improvements whatsoever (the FMV intro might be new, but donâ€™t quote us on that) and only minimal effort has gone into adapting it for consoles. Text is small and hard to read even on a HD TV, the menus are bland and ugly and the controls are taxing to learn. Even after playing through all three tutorials it took around another hour of play and experimentation to finally master the control scheme.

It truly has the least intuitive set-up of recent times, using LB and RB to cycle through numerous tabs and options while moving sliders with the D-pad. Train routes meanwhile are selected by hovering over a station and pushing in the left analogue stick; the only time this button comes into use. This may sound like a petty complaint, but it can often take around two minutes of menu flicking just to get a train to pick up the correct goods from one station and drop them off at the next. We imagine this task would have taken mere seconds on PC, thanks to mouse input. 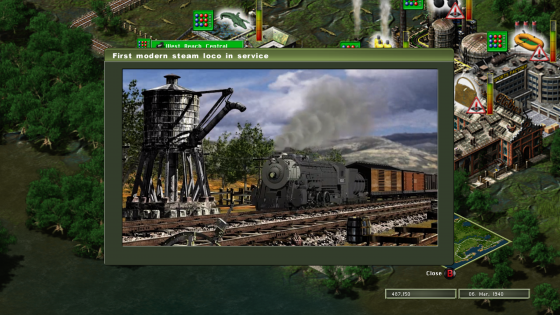 As already hinted at, the game itself is a golden oldie. Very similar to Transport Tycoon, if you can remember that, but more ambitious. On default setting (both campaign and endless modes feature) your voyage into transport management begins in 1900, with only trains, rickety vans and various agriculture businesses available to turn a profit. Technology improves over time, adding boats and aircraft to the vehicle roster as well as stores that sell various luxury goods. Much later on â€˜luxury pointsâ€™ become available which can be used to purchase zoos, playgrounds, rollercoasters and other entertainment complexes that help boost town populations.

Play it on the fastest speed setting (20x) and the years fly by, with new trains and such unlocked every few minutes. This isnâ€™t the way itâ€™s meant to be played, however, as when making like a time traveller youâ€™ll notice frequent dips in profit. This is because demand for some items drops during certain times of year. For instance, the second campaign mission entails setting up shop in Florida, supplying rubber dinghies and suntan lotion to the sun-loving masses. These items are only in demand during spring and summer, so itâ€™s wise to reduce production over winter. Fail to do so and the warehouses will soon fill up with surplus stock. Also: alligators, if you open a â€˜gator farm in order to make fancy handbags. Surplus alligators.

Itâ€™s a demanding experience, then, requiring you to keep a close eye on production facilities while keeping with the times â€“ trains need replacing with newer models, while vans are only of use to towns in close proximity that are still growing. 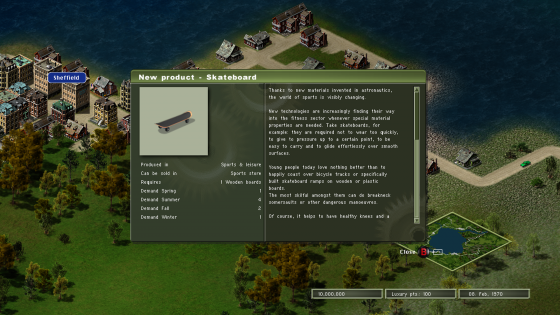 Every facility requires income to run, and this is where things take a nosedive – this is one of those simulation games thatâ€™ll make you pay dearly for reckless decisions. Run into debt and no new purchases can be made, instantly scrubbing any plans you may have to get your business back on track. All you can do is try and stabilise losses by destroying buildings that arenâ€™t turning a profit, all the while hoping your debts don’t spiral out of control. Once we were close to finishing off a new train route, only to run out of cash while connecting track. Into the red we went â€“ mission failed.

Despite featuring some heavily outdated concepts, not to mention horrifically fuzzy visuals, Industry Giant 2 remains engaging. Itâ€™s far from ageless, but itâ€™s still easy to admire how deep it is once you get into the swing of things. The 8-9 hours we spent playing prior to writing this review flew by.

Thereâ€™s just no shaking the lack of thought that has gone into this conversion. To put it into perspective, itâ€™s akin to EA re-releasing Sim City 3000 on PS4 and Xbox One at full price, just as it was in 1999. Weâ€™re all for preserving old videogames for future generations, but to release something as old as this in a completely unaltered state shows only a considerable lack of effort.