Usually itâ€™s an anticipated download-only title that headlines Nintendoâ€™s weekly eShop schedule, but this week is slightly different – itâ€™s Super Smash Bros. on 3DS that leads the charge. That said, itâ€™s also something of a quiet week with just one other game and two Virtual Console releases due out. 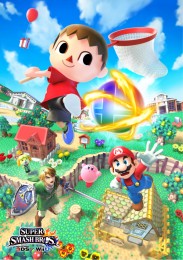 Weâ€™ve seen a few first-party games arrive on the eShop at reasonable enough prices. In the case of Super Smash Bros. though you would be far better off looking online or even on the high street – Nintendo has opted for a premium rate price of Â£39.99. At the time of typing, the retail version is Â£31.85 on Amazon and Â£31.99 at GAME. You can even buy a download code from GAME for the same price. Go figure.

We spent a bit of time with the Super Smash Bros. demo and were left feeling impressed. We also managed to build up a degree of hatred for Animal Crossingâ€™s Villager in that short space of time – expect his easily spammed gyroid rocket attack to become a nuisance.

The first reviews are starting to tickle through now, and they’re mostly full of praise. There are a few complains with the controls (the analogue stick prevents precision inputs, reports Eurogamer) and also issues with latency in local multiplayer (four-player matches are borderline unplayable claims GamesRadar) but to quote God is a Geek â€œIt would be easy to sit and reel off a list of things Super Smash Bros. for Nintendo 3DS doesnâ€™t have, but itâ€™s better to focus on what it is. And what it is, is a functionally excellent, portable version of Super Smash Bros.â€ 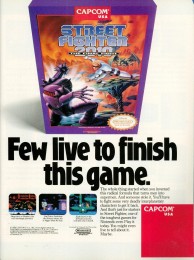 That other new release? Why, itâ€™s EnjoyUp Games’ 99Seconds on Wii U. The Â£2.29 download features retro chic minimalistic visuals and involves dodging and weaving in and out of bullet arrangements and other obstacles. Fortunately, time can be slowed down to make this task slightly easier.

The two Virtual Console releases both herald from the Street Fighter camp, but they couldnâ€™t be further removed.

Street Fighter Alpha 2 (Â£5.49) was one of the final SNES games, pushing the system hard to replicate something that PSone and Saturn owners were also enjoying at the time. Thatâ€™s on Wii U and well worth a look. Then on 3DS thereâ€™s the little-known curio Street Fighter 2010: The Final Fight (Â£4.49). Itâ€™s a pretty horrid 2D platform shooter starring Ken, now equipped with super human abilities in order to battle aliens. Thereâ€™s a whole Angry Video Game Nerd episode dedicated to its foulness.

This leaves us with a couple of discounts. The mildly well-received Jett Rocket II: The Wrath of Taikai on 3DS falls to Â£5.25 from Thursday, while Tappingo drops to Â£1.69. We’re pretty sure both of these have been discounted before, so take ’em or leave ’em.