In an effort to confuse everyone, Madden 15 is the 27th game in the Madden football series and the sequel to last year’s Madden 25 – the 25th anniversary edition which was actually the 26th game in the series (or more, if you include Madden Football 64 on the N64 which pretty much screwed up EA’s annual naming scheme). Sure, the 15 just means 2015 – except it’s 2014 and this is the 2014 NFL season. EA, why do you mock us?

Assuming you’ve correctly managed to buy the latest version of Madden (we can see 2025 being a particularly tricky year for grandparents of young football fans), you’ll be pleased to know that Madden 15 is actually really good. In a way (if you ignore last year’s slightly lazy effort) this is the first next-gen Madden game, where EA have put some effort in to make things look considerably better than a standard PS3/360 game. They’ve even made some rather innovative improvements to the actual gameplay – you can now properly play as a defensive player. That only took 26 years – well done EA!

Clearly, defence (or “DEFENSE!” as it’s called in America) is the big thing this year – Seattle Seahawks defensive cornerback Richard Sherman is plastered on the box, whilst Carolina Panthers linebacker (that’s on defence/defense) Luke Kuechly featured in the trailer. Madden 15 is all about sacking Quarterbacks! (This means hitting the player in the Quarterback position, not dismissing them from employment.) 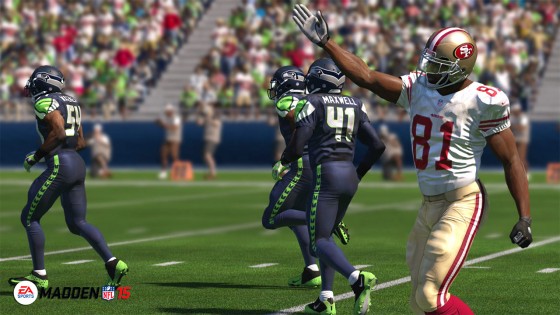 Like most good officially licensed NFL games, Madden 15 features all 32 NFL teams. Some highlights include the Miami Dolphins, who aren’t actually aquatic mammals. They can face off against the likes of the New York Giants (actually quite regular-sized), Seattle Seahawks (fun fact: no such bird exists), or the possibly quite racist Washington Redskins (we won’t comment on the Cleveland Browns). All teams include the real players, accurately stitched uniforms and stadiums in which to play the game. Go football!

Similar to EA’s FIFA series, Madden 15 features an Ultimate Team mode. Here you build up a team by collecting cards that represent players, contracts and other team-related things. It’s a little bit more complicated than FIFA’s version, as you have to deal with the larger American football squads, but it’s similarly infatuated with in-app purchases. To create the ultimate team, you can either spend a long time playing through all of the challenges, or hand over your credit card details. Hmm. 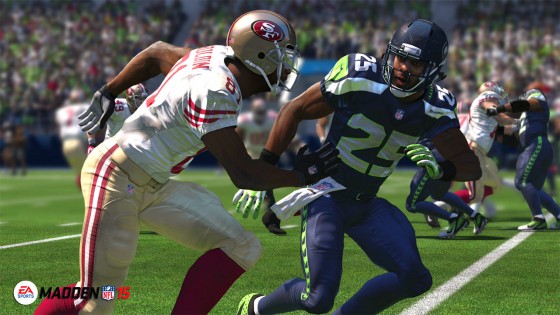 Fortunately Ultimate Team isn’t the main attraction. That would be the Connected Franchise mode, which doesn’t try to milk your wallet, and is actually a whole lot more interesting. Connected Franchise mode can be played either solo or online with friends taking control of the other teams. Here you select to play as either a player, coach or team owner, each giving you slightly different responsibilities – although owner mode pretty much gives you all the elements of coach mode, with the added ability to control a team’s finances and, should the urge arise, relocate your team and change their name.

Madden fans – the only people who’ll likely care about this review – should be pretty familiar with Connected Franchise mode. Aside from online matches, this is how you’ll spend 90% of your time in Madden, playing through seasons as your favourite team, upgrading your players and increasing the price of jerseys to piss your fans off. It’s as close as you’ll get to an American football management game on a console – although you still play the matches in the regular fashion, so player skill trumps management techniques. 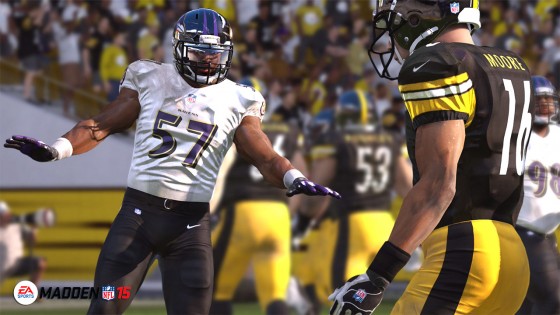 In terms of presentation, for the most part Madden 15 is gorgeous. Sure, the players all have slightly dead eyes, but generally the player models are top notch, the helmets ultra shiny, and the stadiums generally pumped with atmosphere – it’s a significant improvement on last year’s effort, with a slew of quick cutscenes and new camera angles really making it feel a lot more like a televised game.

Given the annual nature of EA’s updates, it’s understandable that some fans might want to skip the occasional year. This isn’t a year you want to skip. Everything about Madden 15 is really solid, with certain aspects seeing substantial improvement. Last year Madden 25 was enjoyable but a little underwhelming – it felt a bit lifeless at times and not what you’d really hope for in a next-gen title. Madden 15 goes up a gear. This is possibly the first time we’ve been really excited about Madden.