When it launched in 1989, Konamiâ€™s side-scrolling Teenage Mutant Ninja Turtles arcade game went on to become the biggest selling coin-op of that year. Clearly keen to repeat the success, Konami looked for other suitable licenses. In the years that followed Bucky â€˜O Hare, The Simpsons, The X-Men and even quintessentially European hero Asterix went on to star in their own Konami side-scrollers. 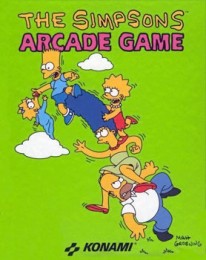 Out of all of these, itâ€™s arguably The Simpsons Arcade Game thatâ€™s the most cherished. Released inbetween series one and two of the long running cartoon it became the first ever Simpsons game, narrowly beating Bart vs. The Space Mutants out of the door by just over a month. To be more specific, development began in February 1990, and after a successful trial in Chicago, it was rolled out in American arcades on March 12th 1991. Acclaimâ€™s NES platformer Bart vs. The Space Mutants on the other hand didnâ€™t make its debut until April 25th.

Acclaim went on to release numerous Simpsons games in the early â€˜90s, but none could match the brilliance of Konamiâ€™s arcade classic.

Releasing so early in the cartoonâ€™s life, Konami didnâ€™t exactly have a huge amount of material to work with. Waylon Smithers – who had blue hair, as per the There’s No Disgrace Like Home episode – is portrayed as the main bad guy, running off with Maggie after her pacifier is accidentally switched with a diamond during a robbery. Quite why the mild mannered Smithers suddenly turned to crime is anyone’s guess. Another oddity is that Moeâ€™s Tavern is found situated under Springfield Cemetery, requiring an elevator ride to access. These discrepancies donâ€™t spoil the game, of course. In fact, they highlight just how determined Konami was to include as many faces and locations from the show as they could. 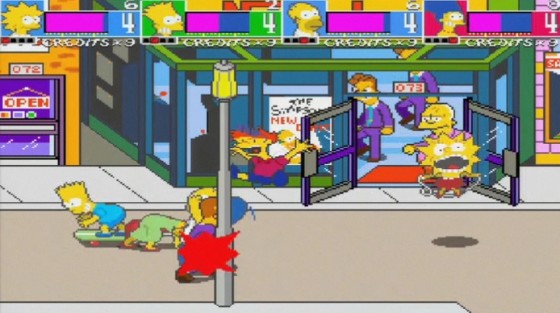 Indeed, subtle nods and winks are pleasingly frequent, with one piece of trivia being that a pair of rabbit ears can be seen under Margeâ€™s hair when electrified. For those not aware, Matt Groening originally wanted Marge to expose said ears during the eventual final episode. This was to be a reference to Groeningâ€™s Life in Hell comic strips. 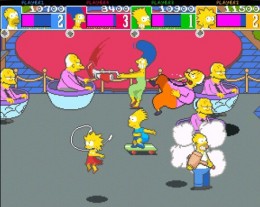 The Downtown Springfield opening stage does a brilliant job of drawing you in – the speech samples are crystal clear and thereâ€™s a dazzling array of colours on display. Moreover, it looks magnificent. It’s the cartoon in pixel-art form, pretty much.

All four key characters from the Simspons clan are playable. Marge attacks using a vacuum cleaner, giving her a wide reach. Homer uses his fists, Bart a skateboard and Lisa her skipping rope… which she occasionally gets tangled up in. Certain characters can additionally perform a â€˜tag team attackâ€™ together – Marge and Homer roll up into a ball, while Lisa climbs onto Bartâ€™s shoulders.

Like all decent arcade games the first level is a breeze, giving players a chance to get acquainted with the controls. To be fair there isnâ€™t much to learn – like Teenage Mutant Ninja Turtles it uses a simple two-button set-up of â€˜jumpâ€™ and â€˜attackâ€™. Pressing both buttons at once performs a slower heavy move thatâ€™s very useful during some boss battles. Speaking of which, the first boss for this short opening level is wrester Professor Werner von Brawn, as seen in the episode Bart the Daredevil. 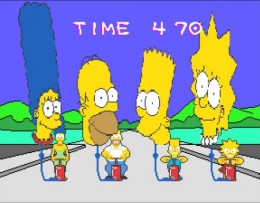 After a button-bashing balloon blowing mini-game (if youâ€™ll excuse the alliteration), the Simpsons find themselves in Krustyland. Just like Downtown Springfield – which features Skinner, Martin Prince and Sherri (or Terri) – Krustyland is likewise filled with cameo character appearances. Santaâ€™s Little Helper and Snowball II can, rather amusingly, be used as projectiles while psychiatrist Marvin Monroe hands out cans of soda if you approach the fast-food stand heâ€™s working behind. As we mentioned earlier, Konami took a few unusual liberties with the license. Hired goons dressed as the rabbits from Life in Hell make up part of the bad guy assortment for this stage too. The level ends with a battle against a huge Krusty balloon that bounces and stretches around the screen in an impressive manner. Well, at least it was impressive for the time.

After two levels of roughing up Mr Burnâ€™s hired muscle, the Springfield Cemetery brings a change of pace – zombies, and lots of them. This stage has a whiff of Michael Jacksonâ€™s Thriller about it, with the zombies spinning around on the spot and clapping their hands in synch. Thankfully they can be dispatched easily by using the slingshot that has been left lying around. Japanese gamers had it even easier as Konami made a few changes to their version, such as adding one or two â€˜smartbombsâ€™ in each stage. They usually appear next to clusters of enemies. In this stage’s case, a large batch of zombies. 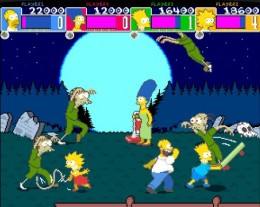 A brief descent in an elevator brings the Simpsons straight to the doorstep of Moeâ€™s Tavern. Here, the first mid-level boss appears – a pair of mobsters dressed in ill-fitting suits. These two are seen casually strolling by in the levels prior. They arenâ€™t too tough to defeat, and nor is the boss found at the end of Moeâ€™s bar – an intoxicated skinhead. As well as Barney and Bleeding Gums Murphy, this level features another cameo – Princess Kashmir, the erotic dancer that Bart catches Homer with via spy camera. If Homer stands next to the dancer heâ€™ll perform his â€˜victory danceâ€™ – yet another nice touch.

The next stage is Springfield Butte, featuring the Bigfoot monster that Homer was once mistaken for. This level is the first where jumping is essential to progress. I know this because the cabinet I used to play on as a child had a broken 2P jump button, making this the end of the line for whoever I had dragged into the arcade. This reasonably short level features a boss battle with the colossal bear freed during a ruckus in the Krustyland stage. Once beaten itâ€™s revealed that it was in fact a man dressed in a bear costume all along. Presumably Konami felt it unsavoury to depict harm to animals. 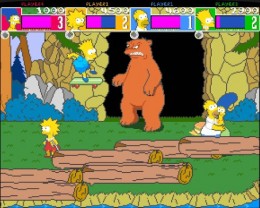 Plummeting from the end of a cliff – Springfield gorge, quite possibly – sends the Simpsons into a daze, prompting an unexpected â€˜Dream Worldâ€™ stage. The difficulty level ramps up slightly here due to the inclusion of some pesky flying enemies. The boss too can be taxing – a monster bowling ball that stomps the ground and thrashes his arms around.

The next stage is also a little unexpected – the Channel 6 Studio. You certainly canâ€™t knock this level for variety though. As our heroes make their way across different sets they get to battle space aliens, robots and ninjas before taking on a kabuki warrior. With Mr Burns the only evil doer in the show at the time, Konami really did have to use their imagination when it came to boss battles. 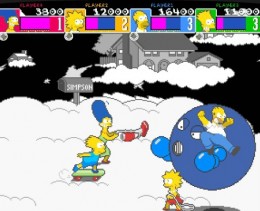 Springfield Power Plant is the setting for the final stage. Although the developers could have potentially had the Simpsons brawling in the power plantâ€™s corridors, we instead have two boss battles back-to-back.

Smithers is up first, and after nonsensically yelling â€œWelcome to my world!â€ he begins to throw bombs. Some of these can be picked up and thrown back; the means of defeating him quickly. Mr Burns then appears in a nuclear powered suit. This battle has been clearly designed to get gamers emptying their pockets – Burns has a couple of cheap attacks, and just when you think the suit has been destroyed it transforms into something else, at one stage resembling a hovercraft.

Just before the end credits roll and the yellow fellows walk off into the sunset with Maggie, a short cut-scene occurs – Homer takes the diamond out of Maggieâ€™s mouth and tosses it to one side. In the words of McBane: â€œThatâ€™s the jokeâ€. 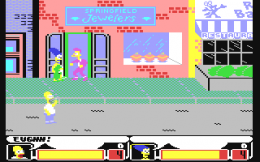 Itâ€™s often believed that The Simpsons Arcade never received a home release, but thatâ€™s not quite the case. Due to Acclaim holding the rights for Simpsons console games, Konami could only release their arcade hit on computers, resulting in versions for both PC and Commodore 64.

Although two-player only, the PC version is reasonably faithful. Thatâ€™s more than what can be said for the C64 iteration, which suffers from stiff controls and a far slower pace. It does at least feature some neatly drawn static cut-scenes.

Konami also re-released the game on XBLA and PSN briefly back in 2012, adding online play, a survival mode and the chance to play the Japanese version. After twenty long years, fans could finally play the first, and arguably best, Simpsons game from the comfort of their very own couch.