Some games are so bad theyâ€™re good. Judging by the trailer alone, SEGAâ€™s new arcade shooter Transformers: Human Alliance is one of those games.

Bad voice-acting, comically poor cut-scenes, character models that donâ€™t quite look right – this has all the hallmarks of a classic SEGA shooter. We all know deep down that The House of the Dead wouldnâ€™t be anywhere near as memorable without the notoriously poor voice overs. Even the deluxe sit-down arcade cabinet looks delightfully tacky. The presumably cheaper upright cabinet, slightly less so.

Set during the original movie trilogy, it sees Optimus, Bumblebee and Sideswipe gunning down Decepticons while on the hunt for Megatron. Sam and Mikaela also appear – the trailer shows the Transformers saving their human hides on a couple of occasions. We assume thatâ€™s them, anyway – the human character models resemble something from the PlayStation 2 era. 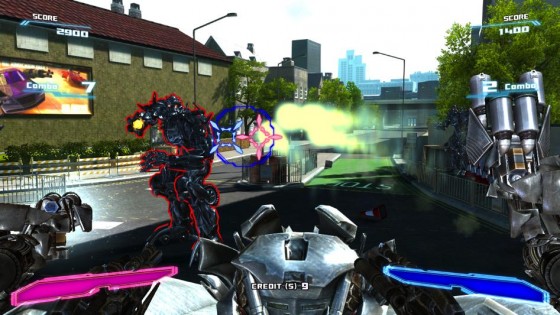 The â€˜allianceâ€™ part of the gameâ€™s title seemingly comes from fact that firepower is increased when both playersâ€™ cursors are close to one another. Defeat an unspecified amount of enemies using ‘Alliance Mode’ and â€˜Super Alliance Fireâ€™ mode kicks in, enabling autofire. Extra lives are also gained at the end of each level depending on how well â€˜Alliance Modeâ€™ was used.

The on-rails shooter is currently rolling out in Japanese arcades. The fact that the machine is currently available to order on SEGA’s European arcade site suggests that a western release is imminent.

Update: Two minutes of gameplay footage can be found here.