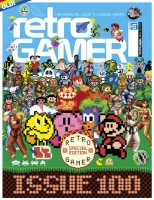 The 100th issue of Retro Gamer has arrived and as you may have guessed, itâ€™s rather special.

The editors have been keeping the contents a secret for the past few months but now those secrets are out of the bag. Quite literally in this case â€“ for possibly the first time ever the magazine comes in a polythene bag due to the fact that it contains a reprint of the incredibly rare first issue. The price has been bumped up from Â£4.99 to Â£5.99 this month to take the extra issue into account but itâ€™s still a bloody bargain â€“ issue 1 has been known to sell for as much as Â£120 on eBay.

Inside the 100th issue not only is there a â€˜making ofâ€™ the original Game Boy Tetris but also two more â€˜making ofâ€™ articles on both Sonic the Hedgehog and GTA. This is as well as a look at the videogame crash of 1984, a chat with the father of videogames Ralph Baer and a huge feature on the top 100 classic gaming moments.

Homebrew hero Jason Kelk has also taken time to create an exclusive game for Retro Gamer â€“ a platformer for the C64 titled RG Rampage. You can click here to download it instantly or type in the four pages of code printed in the magazine. That sounds like a challenge in itself.

How are they going to ever top this? Issue 101â€™s planned celebration of 25 years of Metal Gear Solid and look back at Ocean Software sound like a fine place for Retro Gamer to start.