I just lost a couple of days to an iPhone game. A very meta one at that. A game in which I made games. Ninja action games, pirate RPGs, and Japanese cosplay date rape simulators, among other things. A game about making games? A gamer’s wet dream, surely?

Game Dev Story is an unassuming little creature. It just looks like a simple little mobile game, a kind of Theme Park clone with a development studio skin. In fact, you don’t really do that much at all – you hire staff, train them, then ‘make a game’, before repeating the whole process with the benefit of the money and experience earned from the sale of your game. The concept itself though, combined with an over active imagination, can make it quite compelling.

Your imagination is quite important to the whole thing. You see, when making a game you don’t literally design it, and you never actually get to see what you’ve designed – you simply give the game a name, choose a theme (e.g. pirates, robots or ninjas, plus many others), pick the genre (perhaps a shoot ’em up), select the system you want to release it on (systems with a higher market share usually have larger license fees), and then commence development. The process is largely about generating the highest numbers you can, whilst balancing certain factors – do you want great graphics or nice sound? Do you want to splash extra resources on bonuses? Do your developers really need sleep? Then how much do you want to spend to advertise your game? 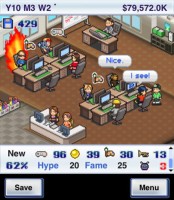 Actually there’s quite a lot to factor in. You just don’t see too much of it, beyond your workers burning furiously at their keyboards (literally), and game reviewers praising or panning the game upon completion (not that the buying public necessarily give a shit what the critics think). A few little surprises and events pop up every now and then though, such as game shows, awards ceremonies and the dreaded power failures. After a few hours it does become quite clear that you’re doing the same thing over and over again, but tending to your ‘creations’ whilst imagining your own storyline, it becomes really engrossing.

There’s just something really appealing about creating your own games, even if it does just mean sticking the words ‘sumo’ and ‘dance sim’ together. Soon you’ll start creating games that spawn a series of sequels, and eventually when you have enough money and superstar developers, you’ll have the chance to release your own games console. Who wouldn’t like the sound of that?

So yes, it’s compulsive fun while it lasts. It might be reasonably short lived (though quite monumental by iPhone standards), but then it only costs about 2 pounds and you can play it in bed. Or on the toilet. Or at work. I’m already really looking forward to a possible sequel.