Gimmicks over gameplay â€“ that’s what someone has probably said at some point about a Wii game. I’ve just checked with Google, and they have indeed. 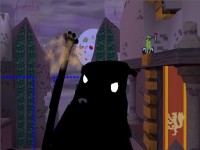 DTL:TNC â€“ an abbreviation I shan’t use again â€“ doesn’t employ a Wii-related gimmick though. Well done, you might think. Not so: for Drawn to Life does employ a gimmick, it’s just a Nintendo DS gimmick. But in a Wii game. Which works as well as you’d imagine.

The first Drawn to Life was a DS title, and used the stylus as a drawing implement. Here it’s the flappy, imprecise Wii remote instead. With that you’re supposed to draw your character, and many other objects which fill the half-hearted platform game which passes as the title’s substance.

Many of these objects are quite incidental background details, and for those that function all you’re really doing is giving a coat of paint to an invisible solid block. For example, leave transparent the top half of the bridge you’re asked to draw early on, and you’ll simply float across what you’ve actually drawn. Even if it is a massive poo with smell lines.

But hang on, it’s not all bad. The platform-based levels call on you to draw bits and pieces on the fly, in specified areas. Initially they just stay where they are; the next type drop under the influence of gravity and interact with the surroundings accordingly. When such a new variety is introduced, it’s rather fun to experiment. But alas you’re strongly guided in what to draw by the shape of the area in which you are allowed to draw. So if it needs to roll, you can guarantee you’ll have a circular drawing area.

The action drawing is the highlight of the platforming though. The rest is slightly fuzzy in execution, and largely standard in design. But it’s vastly preferable to the utterly bizarre car sections. I was concerned that the car’s erratic performance was being influenced by the sketchy illustration provided, but no, it’s just badly done.

You’re rather left to make your own fun, then, with the whole drawing element. If you have someone to share the artistry with, then at least you can laugh at each other’s attempts. For a while. It’s virtually inevitable that the temptation to use simple blocks of colour, or the stamps provided, will become too much. Which just leaves you with a bland platform game with a half-interesting ‘draw the odd line where you’re told to’ mechanic.