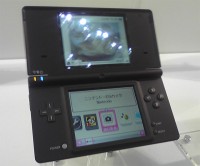 Nintendo can’t sit still for two minutes. After introducing the redesigned DS Lite a couple of years ago, they’re at it again. This time it’s called the DSi and it’s an ever-so-slightly modified version of the DS Lite.

What’s new? The DSi features a slightly bigger 3.25″ screen (as opposed to 3″ on the DS Lite) and a 3 megapixel camera. Or it could be 0.3 megapixels, the press can’t seem to agree on that one yet. That’s pretty much it. It’s slightly larger than the DS Lite overall, has an added SD card slot and has removed the GBA cart slot, but remains the same basic design.

Interestingly, Nintendo will be opening a DSi game download store, where people can download games called DSiWare in a similar manner to WiiWare, and stick them on an SD card to play them on their DS.