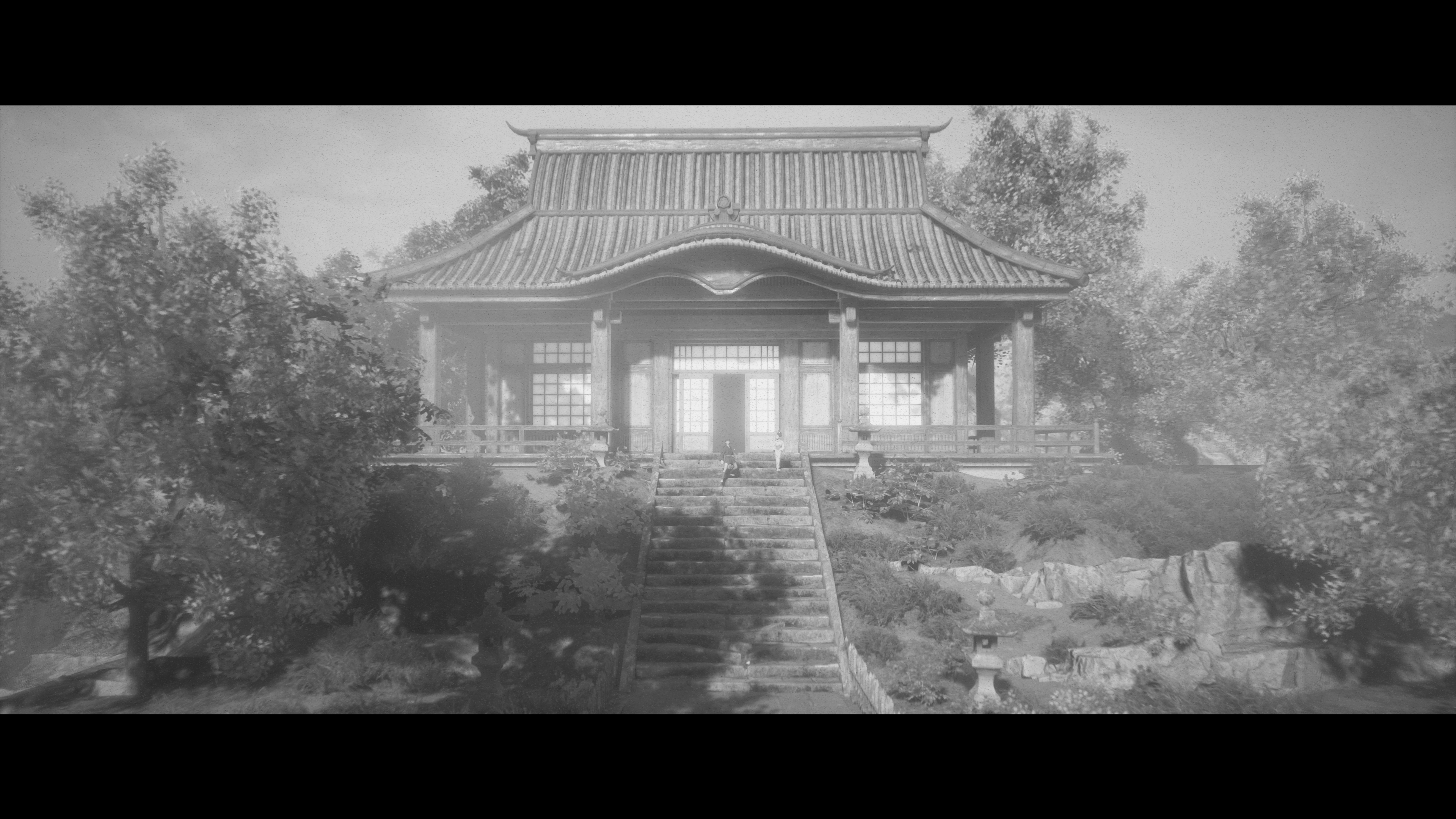 The greatest compliment I can give Trek to Yomi is that it looks and feels as if it came from a Japanese development studio. In reality, it was developed by Polish outfit Flying Wild Hog, best known for the Shadow Warrior series. It’s so respectful of the country’s history and culture that some of its finer points will likely go unnoticed. Ironically, 3D Realms’ original Shadow Warrior was far from being politically correct, proving it’s never too late to make amends.

The first thing to make an impression in this side-scrolling samurai hack ‘n slasher is the visual style, intended to mimic the look of an Akira Kurosawa movie, right down to a celluloid grain filter. It’s in monochrome throughout and presented in widescreen, while also utilising cameras that manually pan to follow the action – shrewdly placed at various angles to give a cinematic feel. Cut scenes and set-pieces are impressive, making for numerous memorable moments, such as panic-inducing escapes from crumbling and burning buildings.

The visual style isn’t without fault, however, leading to some unexpected issues. Collectables and consumables can be tricky to spot within the environments, the HUD can sometimes obscure the action when a static camera is used, and the bloom lighting managed to conceal at least one save point. Thankfully, the bloom and grain filter can be removed, allowing for a cleaner image. For something with a combat system centered heavily around timing, the camera also has a habit of zooming too far out, although this is mostly towards the story’s end – and by this point, you should have the mechanics mastered.

Our hero Hiroki – who’s out to seek vengeance after bandits attack his village – is mostly restricted to moving along a set path, with free movement only given to explore larger areas. I did want to use Square’s cult classic Bushido Blade as a comparison to the combat system, but that game has perhaps fallen into obscurity. As you’d expect, though, it relies heavily on blocking and parrying while performing a mixture of light and heavy attacks. Changing facing direction requires a button press – a problem that has plagued this genre. It’s possible to roll too, although this manoeuvre is largely redundant when playing on the easiest difficulty.

New combos are unlocked throughout – even during the final moments – and there are three projectile types at hand, each with varying speeds. Due to being restricted to a set path, it’s vital that enemies are directly in front when using a projectile – if they aren’t level with Hiroki, chances are that projectile will pass them by.

While the enemy assortment is rather small – countable on one hand – encounters can still be wildly unpredictable. Some enemies block constantly, while others attack viciously. Every now and then a common bandit will catch you off guard, unleashing a chain of attacks that leave Hiroki’s stamina gauge drained. Indeed, this is a demanding experience, and when played on the higher difficulty settings scenes where Hiroki is greatly outnumbered can take several attempts.

The easiest difficulty isn’t exactly a cakewalk, but manageable regardless – with the final boss still putting up a good fight. The default Kensei difficulty is consistently challenging, only letting up once a few health bar extensions have been discovered. Ronin mode is present for those looking to be tested. Here, Hiroki can only withstand a couple of hits. While puzzles feature, they’re sadly mere diversions, being of the ‘match the symbol’ variety. Later examples hide symbols within the environment, but even so, these can be guessed in a matter of seconds. More puzzle variety would have been welcome.

Given the 4-5 hour runtime, it’s clear that Trek to Yomi is meant to be replayed. There are three choice-dependent outcomes to see, and the achievements/trophies linked to defeating bosses without taking a single hit will take practise to unlock. Jump straight into easy mode, and you’ll likely find it all too fleeting. Aim to see everything, and you’ll get your money’s worth, even if you’ll have the combat system licked well before the foregone conclusion.

If the idea of Ghost of Tsushima being given the Assassin’s Creed Chronicles treatment appeals, this shouldn’t disappoint. Come for the visuals, stay for the story, and all the while wonder what could have been if the combat was slightly deeper. Luckily, the luster of the visuals never wanes.

Trek to Yomi is out now on PS5, PS4, Xbox Series, Xbox One and PC. Published by Devolver Digital.