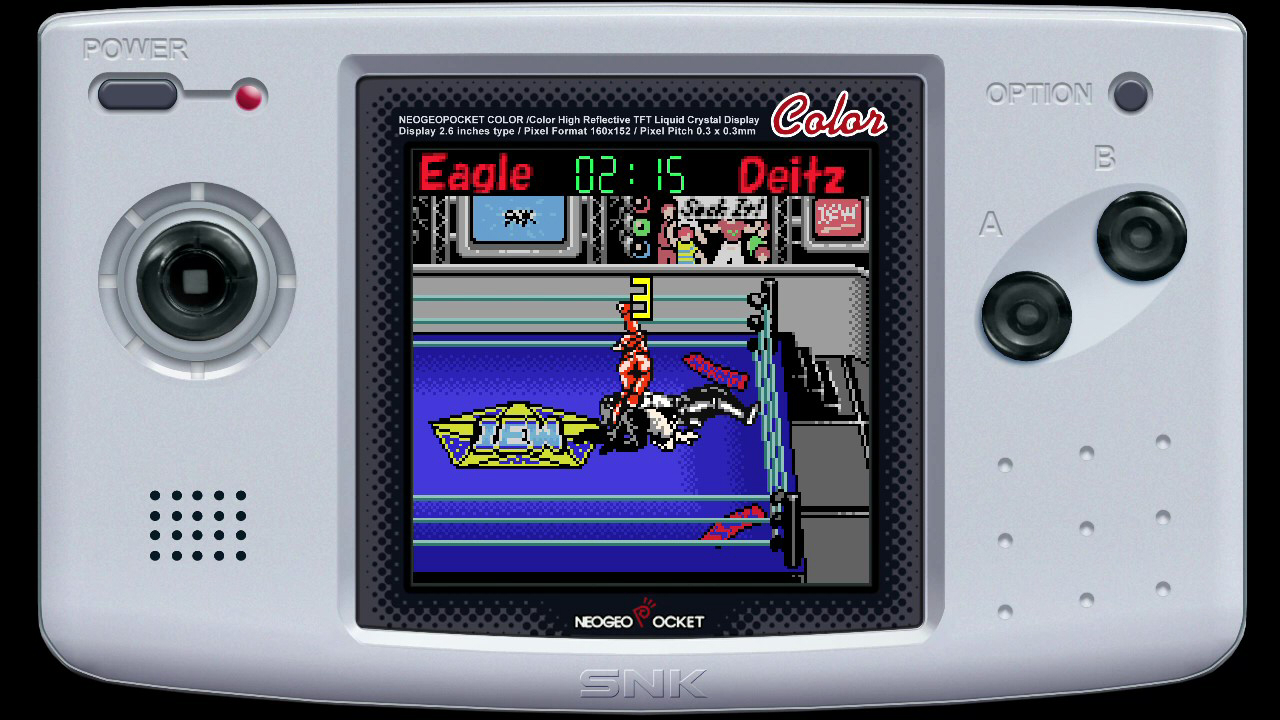 For all the talk (and there’s a lot of it) present in Pro Wrestling, sometimes, what you actually want is to pick up a dude and slam him repeatedly on a tightly stretched canvas until you can pin him for three seconds. There’s a gladiatorial purity to the spectacle (which I’m hesitant to call a sport for reasons of internet arguments) that, if you get it, you absolutely get it. If you don’t, then you probably still won’t after playing this.

A good wrestling game needs two things: suitably bombastic presentation, and a bizarrely deep system underneath for pulling off the carefully choreographed dance moves. Despite the limitations of the handheld, Big Bang delivers on both fronts. The 8-bit colour palette shines brightly in highly saturated shades that pop like a pyrotechnic entrance and outline the impressive special effects and bodily definition of the game’s fictional roster.

I should stress, I suppose, that this is all very much in context. These graphics look great for the Neo Geo Pocket Color, but if you’re coming into this expecting an indie-or-above level of visual detail, then you clearly haven’t looked at the screenshots.

Remaining ‘in context’, the modes of play on offer are reasonably impressive, considering. Keeping in mind that this was originally a portable game released 20-plus years ago, the option to have a coffin match in your pocket is novel, especially at a time when even the modern renditions of the ‘sport’ are often shying away from the more ridiculous aspects of the presentation.

Also ‘in context’, there are eight wrestlers you can get to grips (or, if you like, grasp) with but once you’ve taken them all through the few modes on offer, you’re not left with a lot else to do.

Still, the act of doing it is pleasant, especially if you’ve played any of the Fire Pro series. The input limits of the NGPC left you with just two face buttons, and you’ll tie grapples and strikes together with meticulous timing to master your offence. Y’know, eventually.

Truth is, if you’ve never played with this sort of system before, you’ll be lying on your proverbial back staring up at the metaphorical lights for much of your time because there’s a surprising amount of precision and competence required for you to do well. I came at it from a lifetime of playing all the wrestling games I could get my hands on, so I did okay, but many of you out there with little experience will find a steep learning curve before your first pin.

But let’s shoot for a second (that’s wrestling jargon for ‘telling the truth’). There’s a very small niche of people who will be interested in Big Bang Pro Wrestling in the very slim Venn Diagram of ‘wrestling fans who want to play a 20+ year old Japan-exclusive handheld 8-bit wrestling game’, and to you people, I can honestly say “Yes, it’s worth it.”

Yes, both of you.

BBPW was absolutely the best wrestling game on the Neo Geo Pocket Color in the year 2000. In 2022, on the Switch? It’s great if it’s made for you, but the chances of that are pretty slim (Jim).

Big Bang Pro Wrestling, published by SNK, is out now on the Switch eShop.

Zayne makes games, produces videos, writes books, and occasionally has time to play something. Sometimes, he puts down words about those things.