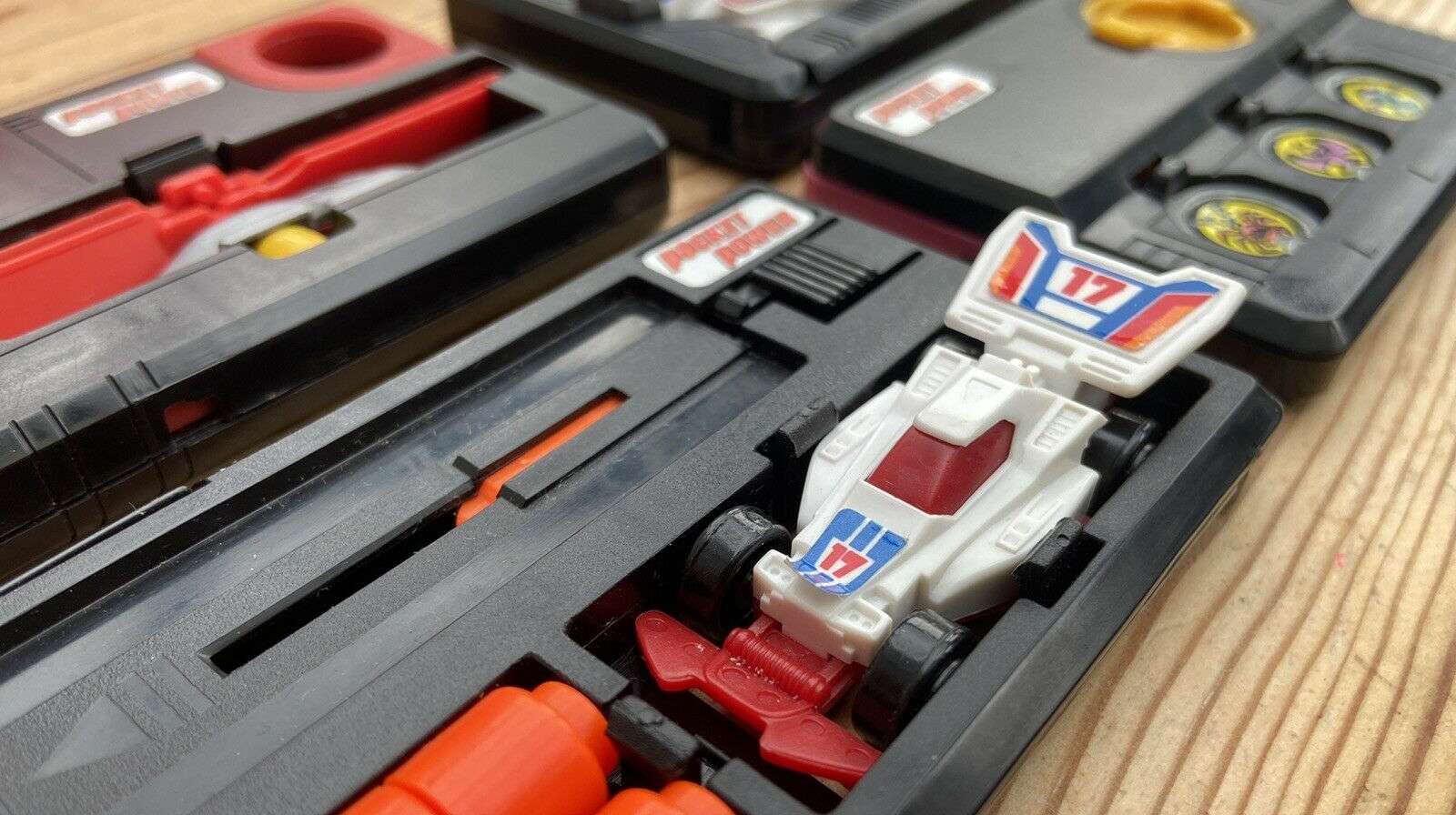 During the ‘80s and ‘90s, SEGA often dabbled outside of console and arcade games. The toy market was particularly enticing, eventually resulting in Yonezawa Toys – Japan’s largest post-war toy manufacturer – being absorbed into the company in 1991.

A few years prior, SEGA teamed up with American toy manufacturer Tyco – best known for their range of radio-controlled cars and the stampede creating Tickle Me Elmo – to release a range of pocket-sized toys outside of Japan. Originally known as Card Power, Tyco settled on the new name Pocket Power, along with the tagline “Power that Packs in your Pocket!”

The concept was simple – a mechanical toy contained inside a small cassette-sized box, intended to be carried around in a pocket. Small enough to smuggle into school, certainly – much of the line’s appeal.

Vehicles featured predominately, and while it’s true that a humble Hot Wheels car could be easily stowed into school uniform, Pocket Power’s vehicles were powered by friction, ripcord, or a launcher mechanism. These action features, together with the low $5 price point, helped to make the line stand out.

The range was spread across three series from 1989 to 1991, with each series smaller than the last, going from ten toys in series one to a speculated four in series three. The toys from the first two lines turn up on eBay often and are well documented online, but series three has an air of mystery. Items from this series rarely show up, and no officially confirmed list has ever emerged. It’s believed to have contained a bowling game and three pull-back vehicles – a submarine, a Lamborghini, and a quintessentially ‘80s skateboarder.

Interestingly, two vehicles from series one were linked to SEGA arcade games – the ripcord-powered helicopter was called Thunder Blade, while the yellow motorbike had Hang-On branding in Japan.

Arguably though, it’s the toys that weren’t vehicles that were the most exciting. Series one also included a set of battling spinning tops, two pellet-firing miniature airguns, and a military-themed stationery set that could be assembled into a turret. Series two had a baseball game, a three-way water pistol, and a survival kit – including a compass, whistle, telescope, and more.

Then there’s Glo Bones – series one’s glow-in-the-dark articulated skeleton action figure. This is by far the most coveted of all Pocket Power toys, nowadays fetching between £50-£100 on eBay if complete with accessories. It was the only fantasy piece within the entire line, and very well remembered by those who owned it. Indeed, there are entire blog posts and YouTube videos dedicated to this figure alone. While comparisons can be made with Golden Axe’s skeleton warriors, the timing is off – if only by around a year.

Although the Pocket Power range has its fans, it’s one of the harder toy lines to collect – many of the smaller parts have become lost over time, and as previously mentioned, toys from the final series rarely appear.

Apart from some confirmed bootlegs – spotted as recently as 2007 – it hasn’t left much of a legacy. Certainly not within the gaming community, and that’s despite two toys linked to arcade games.

Its obscurity is overshadowed, however. Tyco and SEGA also released a similar range aimed at girls in 1989, known as Pocket Pretties. This line included a hair accessory set, a notepad with stamps, a nail kit, a stationery set, and a ballerina with a mirror. The focus on consumable items makes this line even harder to track down, with usually just the ballerina turning up on eBay – the only set without disposable parts. Owning a SEGA branded nail kit would be quite the novelty, if nothing else.